00:00 / 18:49
Spotify Stitcher
RSS Feed
Share
Link
Embed
Josie has an afro with a mind of its own, bouncing up and down as she tells the crowd to jump. Samples of “Gangsta’s Paradise” by Coolio and “Get Low” by Lil Jon get the crowd hyped in between drops. As Candyland end their set, I start thinking to myself, “Why did I ever stop going to these?”

Zeds Dead @ The Great Saltair 10.12 with Krewella and more 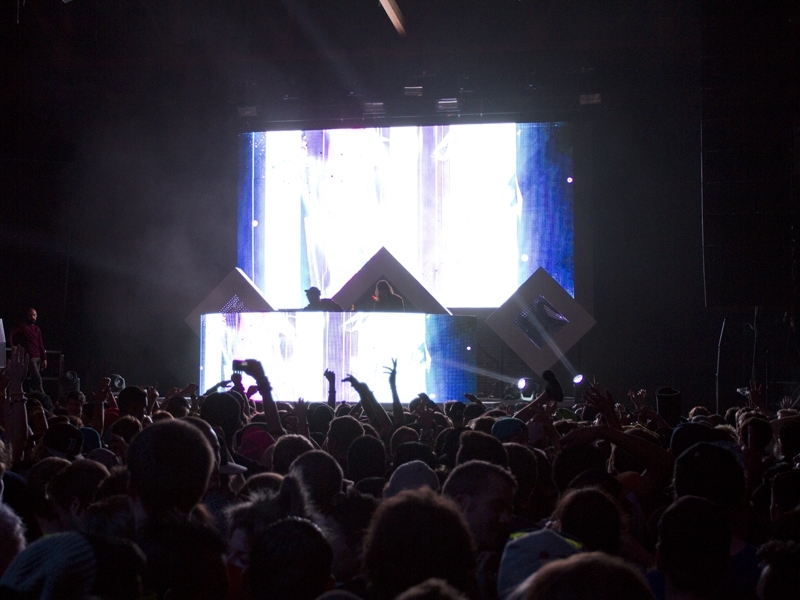 The only way you won’t look like an asshole wearing sunglasses at night is if you are Corey Hart—or at a rave. You might still be an asshole, but you will be among friends. I haven’t been to an electric concert (or whatever you want to call it) in years—Get Freaky had me excited for a night of reminiscence and strangeness. I readied my shades and blue suede shoes for a night of EDM. The initialism (not acronym) EDM stands for electronic dance music, which is a word people use in order not to sound wrong. Zeds Dead is the headliner of the Altered States Tour, which started on Oct. 7 in Ohio—Salt Lake City was its fifth stop. Krewella, Seven Lions and Candyland have also been touring the country. Get Freaky is the annual massive that brought these two tours together at The Great Saltair.

Get Freaky is promoted as a Halloween-oriented function, so I was expecting to see plenty of inventive costumes. I decide to wear my black shirt that says “SECURITY” on the front and back, because no one else will be dressed up as security, right? As I walk up to enter the Saltair, I see about six dudes larger than me wearing the same costume. They must not like me wearing the same outfit as them, because they tell me, “Turn that shit inside out, or take it off”. I keep my cool and abide by these rules, even though I have seen multiple people dressed as police walk in without them batting an eye.

As I enter the venue I am looking forward to see Branchez, based mostly on the fact that my last name is Sanchez. I like stupid coincidences like that. Unfortunately, I had some trouble getting my ticket at will call because part of my name was cut off on the guest list. Green Lantern is the DJ playing as I walk in—his beats are easy to dance to with not as many drops. It is some nice music to meander around the bar area to and make some new friends by bumming cigarettes. In addition to his original music, Green Lantern plays remixes of Kanye West’s “Dark Fantasy” and “California Love” by 2pac and Dre. By the end of his set the crowd has nearly doubled. At this point, I notice that smelly smell that smells smelly. The infamous ‘Rave Smell’ is something I have not missed in my four years of absence from attending these functions. Menthol cigarettes, too much cologne in all the wrong places and body odor from sweaty people who popped a molly would be how I would describe this aroma.

Candyland is up next, but due to a couple of drinks already in my system I feel the need to empty my bladder. I am dreading the bathroom because I know it will be packed with goons carrying around that special odor. As I enter, I notice that there is a pleasant addition to the restroom—staff. In my time away from raves, the management at the Saltair must have realized that they need to keep an eye on the bathroom in order to keep people safe. As I am walking out of the restroom, the duo from Santa Barbara takes the stage. Only Josie is on stage, while Ethan—who does most of the production—is nowhere in sight. They have plenty of build-ups leading the crowd to their nasty drops. Josie has an afro with a mind of its own, bouncing up and down as she tells the crowd to jump. Samples of “Gangsta’s Paradise” by Coolio and “Get Low” by Lil Jon get the crowd hyped in between drops. As Candyland end their set, I start thinking to myself, “Why did I ever stop going to these?”

Everyone is easy to talk to, and no one talks about GMOs or patchouli. That shit gets old fast. The people here are fun to talk to, although I get asked if I have ChapStick by five different people. I hear from a random rave bunny that Seven Lions—according to his Facebook—might not be playing because he broke his arm and has an ear infection. I wait with anticipation wondering whether or not he will play. The screen on the DJ booth flashes the lion head logo as people cheer—broken arm or not, Seven Lions is about to play. His music has plenty of girls singing with far less breakdowns than Candyland—more of a trance vibe gives a nice mix-up to the night. Seven Lions was discovered by Skrillex, but thankfully his music has a feel that is distinguishable from many other EDM producers. As Seven Lions closes out his set, a couple asks me to take a picture of them. I gladly agree, as I put my arm around them and take a selfie with them in it.

As I go outside to try and meet some new friends, I meet a couple I used to hang out with when I would go to electronic concerts regularly. They are talking way to close to me as we try and catch up and they show me baby pictures. I am getting kind of weirded out by them. One of their noses even touches my face. To get out of the conversation I say, “I think Paper Diamond is about to go on” as I hightail it to the door. The only way I can describe his music is smooth—it feels like you are on a magic carpet flying over a dystopian society without a care in the world, if you catch my drift. His computer died midway through his set, sort of killing my vibe. I was actually getting into his music, but when a hiccup like this occurs it takes you back to reality. Anyone could have made this music if they had a laptop and some time. He has just enough time to get the crowd pumped again as his set ends.

Krewella is up next, I have mixed feelings about them. To be honest, I don’t like singing in the EDM I listen to. I have never seen live singing at a rave, so I decide to give them a chance. In their video for “Alive,” they are throwing trash into an empty pool—as a skateboarder, this pisses me off. They have a skateboard in the video, but nothing as simple as a kick-turn in the pool is shown. I try and forget about this as their shiny, spaceship-like setup is assembled. Jahan is wearing all black with a shirt that simply says “Fuck” and Yasmine is wearing all black as well. Kris "Rain Man" Trindl is holding down the DJ responsibilities while Yasmine and Jahan are in front. Live shows are much different than watching a video on YouTube—these two ladies jumping around and headbanging make me feel like I am at an actual show. The energy they put out is amazing. They get the crowd moving more than any DJ thus far. Their vocals are pretty clean, and most of the girls around are singing every word. It honestly feels like I am at a rock show. If you want to know more about Krewella, check out SLUG’s interview by Julia Sachs.

Zeds Dead ended the show with grimy drops and intricate beats. Samples of Prodigy and Icona Pop were sprinkled in between their original music. The sound the Canadian duo produces is on the heavier side of EDM. In February they released a video for their song “Demons”—it is an ode to Michael Jackson’s “Thriller” video and, it is shot very well. This was the song I was most excited for, and it did not disappoint. They closed out the show with style. The energy of the crowd had been building the whole night for the duo to kill it—which they did.

This event was sold out, so at the end of the night the traffic jam to get out was unbelievable. It was quite a sight looking at all these costumed weirdos heading to their cars after a night of boogieing (is that a word?) to electronic music. I have forgotten how fun it is to go to these types of events, you are able to dress up and be whoever you want. Like Transformers, it is more than meets the eye. It is more than kids taking chemicals and looking at lights saying, “Whoa!”