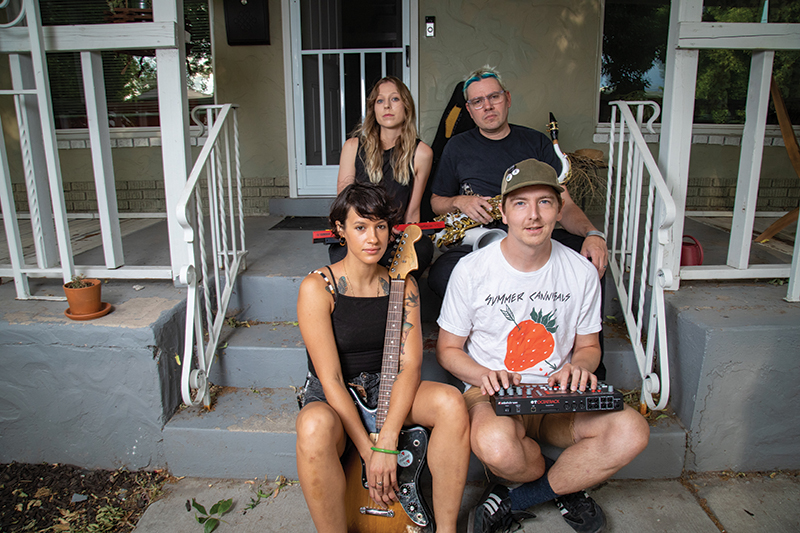 As summer moves to fall, SLUG Localized is making an appropriate segue into the moodier, darker side of the local music scene. The September edition of our monthly concert will feature the laid-back gothic stylings of co-headlining experimental groups Jazz Jags and Durian Durian, as well as opener Picnics at Soap Rock. Together, it will make for a night of independent music that’s equally moving and unsettling. SLUG Localized is $5 at Urban Lounge on Sept. 19 and is sponsored by Uinta Brewing, High West Distillery and Huge Brands.

Durian Durian, the quartet of Emily Snow, Nora Price, Koty Lopez and Dave Payne, are instantly unique. After beginning as something of a one-off for a billing spot Payne needed to fill, the now two-year-old group has formed a singular style through their merger of gloomy electronica and contemporary dance. Though Durian Durian’s performances are full of experimentalism and artiness, there’s never a sense that their work is overly pretentious or so high-minded that it fails to communicate emotion. The group retains a grounded approach to art that is born out of—and furthers—their commitment to a DIY ethos and an end goal of inclusivity and accessibility.

Successfully and tastefully combining different media is daunting enough, saying nothing of the added challenges that come when it’s the same artists performing each role. In a live setting, there’s a jarring casualness to the way that Price and Snow move between their instruments and the dance space. They meander about the stage space without spectacle, instead embracing the fluid structures of their often lengthy songs and breezily moving between their two roles. In the group’s beginning days, Snow says, “We started out with kind of an idea that the dancing should be structured in such a way as to visually represent the melodic line that was missing when we each left our instrument. It was an idea of replacement. It’s more an idea of complement now.”

“Choosing a standing arts infrastructure like ‘band shows’ really works well for us.”

In keeping with this more refined approach to their craft, Durian Durian’s trajectory has been only upward. As the dance element has strengthened in cohesion, so has the music become more succinct and focused. “I think we’re more comfortable with sparseness,” Snow says. “And letting each of those media do what they do and hold their place,” says Price. Another helpful addition is Payne’s saxophone playing, which the group collectively describes as a “textural” element that helps round out their synthesizer-and-guitar-based sound. “He gets to hold that down for us,” says Lopez, previously the only constant musician in the group’s performances. Where earlier iterations of songs were, in Price’s words, “too full,” Durian Durian’s embrace of openness has provided more comfort and ease in both the writing and performance process.

Durian Durian’s search for musical balance is mirrored in their social understanding of their art. Both Price and Snow come from a formal ballet background, and without disregarding what they’ve learned and gained from this experience, they see Durian Durian as a beneficial step away from the practices and attitudes of that world. “Choosing a standing arts infrastructure like ‘band shows’ really works well for us,” says Price. “You do band stuff on your own time, at night and on the weekends, and then you book shows, and you play them. I’d like to see that model in other things,” positioning this against the traditionally exhausting model of project planning and space reserving that is the norm in the contemporary dance world.

“A lot of what we do is based on our physical connectedness.”

The experimental music scene in Salt Lake City, specifically that built out of spaces like Diabolical Records and Payne’s music series at the Twilite Lounge, has been crucial to Durian Durian’s development. “It’s really exciting to try dancing in those different spaces,” says Snow. The creative solutions to these spatial hurdles have included dancing on chairs, playing in parking lots and in-the-moment rewrites to fit the choreography around pillars or other obstructing gear. “A lot of what we do is based on our physical connectedness,” says Price, arguing for how much easier and more inviting it is to perform these works in a space that cuts  down on the separation between audience and performer and allows for more “real-time adaptions.”

Even though they remain open to new experiences and challenges, Durian Durian are still incredibly particular about how they present themselves to the world. Even after two years as a band, the quartet has yet to release any formal studio recordings. They have the songs and are currently recording them with Mike Fuchs, but there’s still some hesitation on Durian Durian’s part as to how they want to showcase their work in a non-live setting.

“The point of having dance on film is to be able to use the medium of film to do what it can do, which is so many things other than shoot you spinning in a field.”

The biggest concern Durian Durian have for recording is how to accurately archive their dances. “It would be easy to hire someone to film a live show, but that’s not interesting,” says Price. When you film dance, they say, “You’re not capturing movement—you’re articulating points that are of interest and amplifying or decentering them.” The group is currently working with two local filmmakers, Dawn Borchardt and Daniel Bosler, to make an audio-visual representation for one of their songs that’s proving to be more creatively satisfying. “We don’t want just an archive of these dance moves,” says Lopez. Snow continues that “the point of having dance on film is to be able to use the medium of film to do what it can do, which is so many things other than shoot you spinning in a field.”

Durian Durian tentatively hope to have their album released in fall or winter, and have plans to tour with Payne’s Gallery of Fine Hyper-Art (GOFHA) and a host of local bands this fall. Head to the group’s Facebook to stay up to date on shows and releases, and be sure to make it out to SLUG’s September Localized showcase on Sept 19 at Urban Lounge.