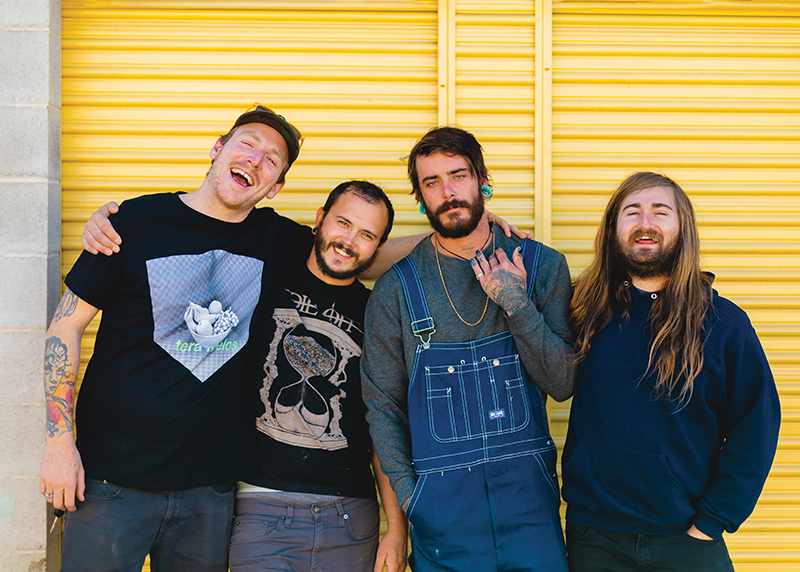 December’s installment of SLUG Localized is a perfect way to get your dose of heavy music in. Featuring The Wake of An Arsonist, Hemwick and 2-Headed Whale, these bands will surely bring the heat to a cold winter’s night with sounds ranging from doom to metalcore. Put on your moshing shoes and meet us at Urban Lounge on Dec. 20. SLUG Localized is sponsored by Uinta Brewing, High West Distillery, KRCL 90.9 FM and Spilt Ink SLC.

Hailing from Ogden, instrumental four-piece Hemwick showcase the talent of Alec Stanczyk (guitar), Matt Baird (bass), Jaxon Harrop (guitar) and Riachle Child (drums). While they have been friends and colleagues for many years, the quartet has recently started to get the ball rolling on their musical endeavors. While their sound could fall under the umbrella term of progressive metal, don’t let that fool you. By mixing in intricate harmonies, dives, mathematical riffs and deep, chunky basslines, they’re nothing short of chaotic—which makes for an explosive, overwhelmingly heavy listening experience that shreds just as much as it looms and haunts.

Hemwick formed in 2015, when Harrop and Child experimented with the idea of making music. It started as just the two of them, pulling together the band by recording an EP and performing a couple of shows—then it was time to expand. “We’ve all known each other for a really long time, so once they formed this iteration of the group, I was like … ‘Let me in on that!’” Stanczyk says. “We’ve been a four-piece now for two years.” Baird and Stanczyk learned the songs, and ever since then, Hemwick has hit the ground running, releasing music and involving themselves in the Ogden music scene as well as Salt Lake City’s.

Hemwick just celebrated the release of their first full-length LP, Junkie, which has been in the making for about two years. Between a lineup switch and playing shows to build momentum, writing happened when it could. “We literally were rehearsing and writing at the same time, the whole time,” Child says. “We would have to rehearse and write weekly. Sometimes, we would get bombarded with shows, and rehearsal would have to take over the time for writing.” After Harrop and Stanczyk joined Hemwick, there was plenty of room for developing chemistry within the band, especially when Harrop and Stanczyk took on the task of reworking and rewriting the old catalog of songs. While the album may seem short with only five songs, the length of each track varies from three to eight minutes, making each one an immersive journey through hellish soundscapes. “This was the most satisfying album release of my whole life,” Harrop says. Now, the band is simply focused on maintaining this momentum.

The decision to be an instrumental band came from many avenues. “When Jaxon and I were working together in other bands, I sang and played drums,” Child says. “By the time we got to making Hemwick, I ditched the idea of vocals altogether because I didn’t want to say much at the time—I just wanted to instrumentally express myself, and it’s worked so far.” While they haven’t ruled out vocals entirely, they’ve enjoyed the creative freedom of making music without the dictation of a vocal narrative. “We leave the music wordless to keep it open-ended,” Child says.

As an instrumental band, each individual member contributes something special to each track. “We each have a different musical background,” Stanczyk says. “We all love common bands, but each of us have our own genres that we cling to. Because we all bring something to the table, that makes Hemwick what it is.” While they each have their own personal influences, it encourages individuality while maintaining unity in the band at the same time. Some favorites and major influences of the Hemwick dudes are Fear Before the March of Flames, Radiohead and The Dillinger Escape Plan.

Growing up in Ogden has been a major influence to the development of Hemwick as a whole. “There really aren’t any venues out here,” Stanczyk says. “Funk ‘n Dive is kind of the only spot. When we were growing up, there were a few all-ages venues around here, but by the time Hemwick started, there were only bars.” Because their music is so aggressive, they assumed that it would be a challenge to lock down an accepting venue. Since Ogden’s alternative scene is much smaller than that of SLC, their audience is much more saturated, making their outreach easier. “The last show [the album release show] was my favorite because it was the first culmination of all the work all four of us have put in,” Stanczyk says. “That one meant a lot to me because it was home. It was at this bar where we live within blocks, and we’re all with friends.”

Because Utah has such a robust heavy-music scene, Hemwick wanted to do something special within their songwriting processes to stand out among the rest. “There are no tricks and gizmos,” Baird says. “It’s pure passion. I think people can tell that we really mean it.” By creating interesting sound structures and making longer songs, Hemwick try to break away from the typical, heavy-band stereotypes. “For us [Stanczyk and Harrop], we’ll nerd out on a pedal online, buy it, and then end up at the practice space trying to find a way to get that sound into the album,” Stanczyk says. “Without having a singer, there’s an extra layer that needs to be taken up.” By experimenting with interesting pedals, layered guitar parts and textured bass lines, they aim to draw from a vast sonic palette to to create a hook/faux ”vocal harmony” that they can use to fill that gap.

As far as 2019 goes, they hope to embark on a tour in the summer and (hopefully) have a new body of music either released or in the works. “Not that we’ve covered Utah by any means,” Stanczyk says, “but we’re ready to take it on the road to the next city.” To tide you over until they hit the road, come check out their performance at SLUG Magazine’s Localized on Dec. 20 at The Urban Lounge, and check out Junkie on their Bandcamp: hemwick.bandcamp.com.