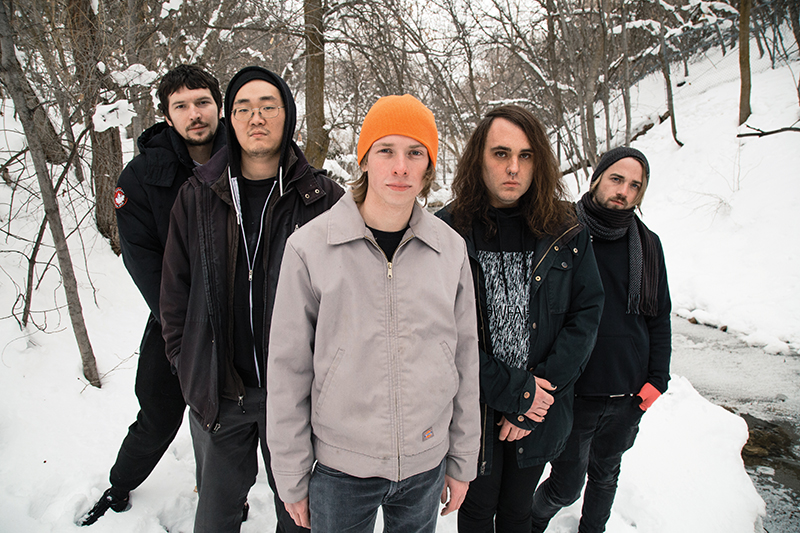 The March edition of SLUG’s Localized concert series will feature some of the city´s finest in brash and creative rock music. Performances by Savage Daughters, Sonnets and Portal to the Goddamn Blood Dimension will give the night an emotional, raucous temperament, so come to the $5 show on Monday, March 25 at 8 p.m. As always, SLUG Localized is sponsored by Uinta Brewing, High West Distillery, 90.9 KRCL FM and Spilt Ink SLC.

A notable trait that Sonnets have is that they take their band and their music seriously. In their current lineup of Kale Morse on vocals, Chuck Pak on guitar and vocals, Ryan Tuttle on guitar, Tommy Fraser on bass and Zach Dansie on drums, Sonnets deliver a hard-edged, explosive sound that backs up songs dealing with the throes of mental turmoil. Each of the group’s songs is chronologically numbered, reflecting the narrative of Morse’s maturation and healing: “The numbers correlate to the order in which they were written, but I see it as an experience to watch ourselves grow,” Morse says. “The only thing any of us can do is keep moving, counting and building.”

Fortunately, the high-minded conceptualism of Sonnets is no placeholder for musical ideas, as the sounds inside these songs are as grand as the informing framework suggests. Each musician is profoundly technical, showcasing speed, melodicism, tone and tastefulness—often all within 30 seconds of one track. Atop the sometimes delirious mix of sound, Morse’s vocals serve as an arresting focal point, hammering in the group’s prescient and potent poetry with all the force of the surrounding music.

Speaking of the lyrical themes, Morse says that “each song is about a specific event, person or idea in my head that has caused me some level of suffering.” A sense of catharsis hangs over the music, as Morse and their band put their all into the music for the sake of expression. “A lot of lyrics come from a very desperate place that some may find overwhelming or embarrassing, but I think it is important to remember that your feelings are always valid no matter how exaggerated they may feel later,” says Morse. Parsing out these messages can often be difficult, as Morse delivers these messages through a shrill scream, but the emotional investment is readily apparent.

This overtness of approach is matched in Sonnets’ music, which refuses to be ignored. High volumes, blistering tempos and abrasive guitar tones quickly shift to slower, clean sections that border on post-rock. The rapid changes and general intensity of the music brings to mind groups like Touché Amoré, Deafheaven or Orchid, though with an even greater emphasis on ambiguity and experimentalism. There aren’t clear hooks or steady riffs; rather, everything comes in a fragmented, billowing wash of sound. Gestures stop and start, instruments fall in and out—the music feels just as troubled as the lyrics, making for a near-perfect match between the two.

Moreover, Sonnets forgo traditional structures and songwriting in favor of fluid pieces that feel like hardcore stream-of-consciousness writing. “The music shifts between moody, quiet trances and intense frenzy to simultaneously accentuate their dramatic disparities while still equating them,” says Dansie. To him, this “instill[s] an intensity in the quieter moments and a sense of ambience in the heavier moments.” Dansie’s intentionally cryptic, paradoxical language serves as an apt descriptor of Sonnet’s musical identity: The sound denies coherence or accessibility, but forms an unnamable logic out of its visceral effect on the listener.

However affecting Sonnets’ sound might be on record, it’s only a fraction of what they deliver during a live show. “Volume is a super-important component of live music,” says Dansie. “Playing loudly blends the sounds of the music with physical sensations in a way that prioritizes the current moment, in a way that makes shared experience more visceral and concrete.” There’s an element of willingness on the part of the audience at a Sonnets show, where giving into the extremity of the sound—in style, performance and sheer decibel level—is a consensual activity. It’s an agreement that everyone is in the room together, existing in one space for just a short time.

Given the intensity of experience at any Sonnets’ show, Localized will be an extra-special night, as the band will perform with Savage Daughters and Portal to the God Damn Blood Dimension, whom Morse describes as “some of our absolute best friends.” Their resultant ideals for the show might sound lofty, but at least they’re lofty in the right direction: “the truest expression we can offer, mutual respect as humans just trying to distract themselves for a moment, and so much love and friendship in the room.” It takes courage and vulnerability to express these emotions onstage, but hopefully, the event will affirm Morse’s predictions.

Sonnets have barely been around for two years, so their trajectory is firmly upward. After their Localized show, the group plans to record and release new music that’s been in the works, as well as—hopefully—embark on a tour. Be sure to make it out for their Localized performance on March 25, and listen to their music on the group’s Bandcamp page at sonnets.bandcamp.com.