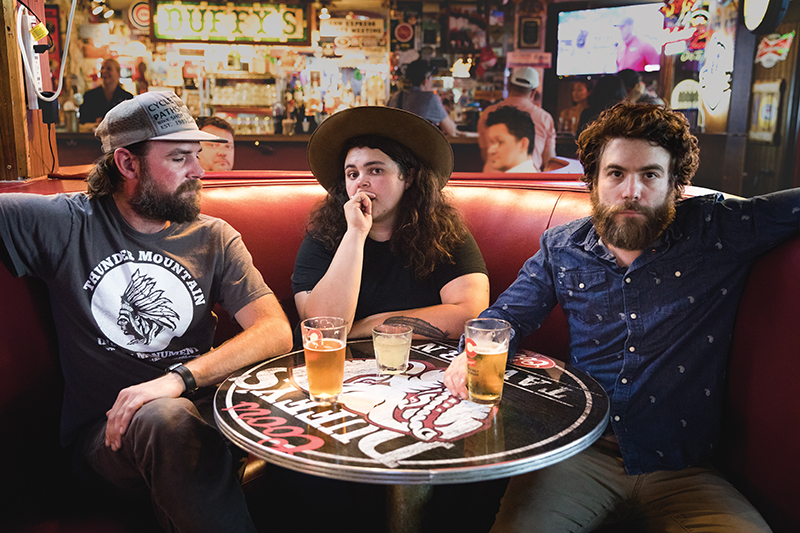 This month’s SLUG Localized consists of artists who bring it all and leave it onstage when they perform. Michelle Moonshine holds nothing back, blending country, folk and blues, while Thalia Condo’s smooth, jazzy pop tunes will be sure to uplift and stir. Matthew Bashaw opens, and it all happens at Urban Lounge on Sept. 20—doors at 8 p.m., show at 9 p.m. As always, this is a free, 21-plus show, and a special thanks goes to our sponsors: High West Distillery, Uinta Brewing, KRCL 90.9FM and Spilt Ink SLC.

In the beginning, singer-songwriter Michelle Moonshine (Michelle Gomez) recalls sneaking into bars to watch live music where she wasn’t legally old enough to attend, trying to fly beneath the radar in order to avoid detection. But, there were a few attentive folks who noticed. Instead of tossing her out, they pulled her under their wing. Within six months, Moonshine was writing and performing her own music in some of the very same venues.

Michelle Moonshine & Co. have been playing together for about four years. That sense of youthful rebelliousness is still present while chatting with Moonshine about music with her bandmates, Bronk O., who plays the upright bass, and John Davis, who sings and plays guitar and harmonica. They had crossed paths with one another while playing in various other bands, but truly clicked over the recording of an EP a few years back. Moonshine recruited some of her favorite people to play and record some of the tracks she had written, and found that the chemistry between her, Bronk O. and Davis was instantaneous and immensely positive. “It was just easy—it felt fun,” Davis says.

There is a shared perspective among the three about the creative process and why they get up every day to share their passion with others. They make music because they absolutely love it and sharing it, even when it gets difficult. The trio plays over 200 shows annually, sometimes when they are exhausted and sometimes for crowds who aren’t quite engaged. But Michelle Moonshine & Co. are always ready to play for an audience and wanting to connect with other people through music. “Sometimes bands play at people,” Moonshine says. “We want to break down that barrier—it’s magical when you are playing music for people who really want to hear music.”

I’d wager that many who listen to Moonshine for the first time would likely classify the sound as country or folk. Those wouldn’t be necessarily the wrong labels, but the band brings so much more to the table than that. Their eclectic taste and individual backgrounds alone create a genre-bending delivery. They may be folk-based, but each has been influenced by so many other types of music and entertainment that what they put forth for people to enjoy is something downright unique and all its own. “It’s cumulative Americana,” Bronk O. says, which is a little broad, but accurate. Davis adds, “A typical response to our music is, ‘I don’t like country, but I like you guys.’”

Moonshine’s EP, Hell Bent, was released in 2015, when the band was working at a pace that seemed surreal. Life changed, however, and so did the band’s plans. In spite of constant touring, Moonshine, who writes all of the material, hadn’t found time to begin creating and recording a new release. But recently, things are getting back to that familiar rhythm, and the band is currently recording a new album, a full-length piece being recorded reel to reel to thoroughly collect the band’s spirit. They’ll possibly release the record on wax. The timing seems perfect for the band, who all claim that the songs Moonshine has penned for the new release are more mature and are a true reflection of what the band represents and what they are aiming to do.

Davis says, “It’s raw, never over-processed.” The band isn’t trying to sound like anyone or anything else. “We want to sound like we do when we are playing in one of our kitchens,” Moonshine says. “We have a ton of chemistry and we don’t want to miss any of that with this recording.”

Moonshine & Co., who sometimes play two or three shows in one day, are generally busy playing all over the place. But there are a few shows coming up that they are particularly excited for. They are opening at the Blues, Brews and BBQ summer series at Snowbasin for Leftover Salmon on Sept. 2. Moonshine is also on the bill at The Depot on Sept. 28 for a show presented by KRCL: Local Women Who Rock. The band is the opener for Mason Jennings on Oct. 26 at the The State Room, one of the band’s favorite venues due to the music-appreciating patrons often found there.

Though busy and being pulled in a hundred different directions, Michelle Moonshine continues to be who she is and has always been. She tells her story and the stories of her esteemed bandmates—sans any glitter or glints—honestly and openly, being vulnerable enough to allow people a chance to identify with her songwriting ability and stage presence. Moonshine has a plethora of experiences to share, as do Bronk O. and Davis. “For every year we live, we have three years’ worth of experiences to talk about,” Davis says.

With a “hear, hear” and raised glasses, half full of beer and optimism, the band shrugs their shoulders in unison. “Those are what they call the formative years,” Bronk O. says with a wry smile, like the three of them know something the rest of us have yet to figure out.

Maybe they do know what it’s all about. They have fun, they care about each other, and they are all immersed in something they wouldn’t give up or change for the world. Listen to Michelle Moonshine & Co. at soundcloud.com/michellemoonshine.