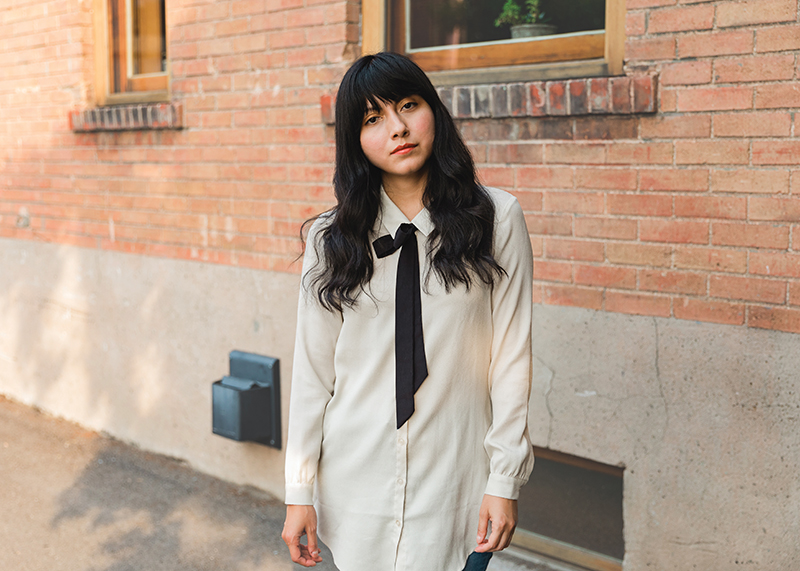 This month’s SLUG Localized consists of artists who bring it all and leave it onstage when they perform. Michelle Moonshine holds nothing back, blending country, folk and blues, while Thalia Condo’s smooth, jazzy pop tunes will be sure to uplift and stir. Matthew Bashaw opens, and it all happens at Urban Lounge on Sept. 20—doors at 8 p.m., show at 9 p.m. As always, this is a free, 21-plus show, and a special thanks goes to our sponsors: High West Distillery, Uinta Brewing, KRCL 90.9FM and Spilt Ink SLC.

Thalia Condo, who plays a mixture of traditional pop with Spanish spice, is excited to be jumping back into the saddle of performing live, onstage. She recently got into the groove once again by opening for the Chamanas at Urban Lounge in early August after a break from playing live, and has a show or two planned for the future. She is currently working on a new album as well, and would really love it to result in playing even more live shows, and possibly a tour beyond the boundaries of Utah. Her songs can be described as hopeful, with the potential to improve your day or revive your sense of well-being. Music is special to Condo—it gives her joy—but more importantly, it allows her to bring joy to others, and to create relationships. “Music heals,” Condo says. “I just want people to be happy.”

Condo, originally from Ecuador, came to Salt Lake City to attend the University of Utah. There, she studied and graduated with a degree in broadcast journalism, but found herself spending way more time in the music building on campus than anywhere else. She cultivated her love of music and was inspired to begin writing her own. Eventually, she quit the job she had landed at a television station and put everything she had into her own music. In spite of her natural shyness, Condo began playing coffee shops around Salt Lake City, an environment that quickly became one of her favorites. “Playing coffee shops helped me get over my shyness,” Condo says. “You can really be yourself there. It’s a special connection that helped me a lot.”

Self-described as a singer-songwriter with pop tendencies, Condo also enjoys exploring the infusion of jazz, as well as other genres, into her sound. Though Condo writes and performs many of her songs in English, she says people usually prefer her Spanish tunes. Her influences range from old Spanish music she heard while growing up to The Beatles, Miles Davis, Ella Fitzgerald and new artists that can be found on any pop radio station. “When I listen to myself, I can hear my Spanish background, but I can also hear chords that may have come from listening to The Beatles when I was young,” Condo says.

Condo has had time to think about what she wants to do next. While traveling recently, she witnessed some traditional music from her father’s Andes Mountains culture, where artists performed using a traditional flute called a quena. She was moved by what she saw and began to wonder what the core of her own influences may be. Condo says that she is still discovering herself and her roots, but would love her new album to be characteristic of her culture—her past as well as who she is and wants to be as an individual.

“Writing is a crazy process for me—I’ve been blocked for a while,” Condo says. “But I’ve been feeling it, and I have to feel it to be able to create. I want my new album to represent where I am from without changing my essence.”

In the past, Condo has felt that people wanted her to change her sound, expecting her to become something she is not. Not having a desire for any of that, Condo has deliberately taken her time to write and create something special—something more mature, music from her heart. During this time, she has identified more about her lineage and how that has helped shape the people who shaped her. She has always wanted to speak her mind while also encouraging hope, and now she feels that she has the perspective to do more of that with the music she is currently working to release. “I’m inspired by people who keep their essence and make a living without changing who they are, what they believe in and live for,” Condo says.

Condo admits that it can be tough to remain true to oneself in this day and age, with technology making it difficult to connect with like-minded people organically. Even in a world as scary as the one we all currently reside in, however, Condo is dedicated to the positivity music has brought her.  It has allowed her to offer it to those around her, while they understand that it’s her passion and purpose. “This world is messed up,” Condo says. “Follow your dreams, even if it’s something little. Enjoy it while you can.”

Condo believes that music can help those seeking something to believe in, those seeking a source of hope. It is that approach and perspective on life and her particular craft that has gotten Condo where she is today. It will likely push her to accomplish all of the artistic goals she sets out for herself going forward, while engaging with audiences, using her music to bring people together, forming bonds and building something positive for those who may come next.

See Condo live onstage for yourself this upcoming SLUG Localized on Sept. 20 at Urban Lounge. Meanwhile, you can listen to Condo’s music at soundcloud.com/thaliacondo.