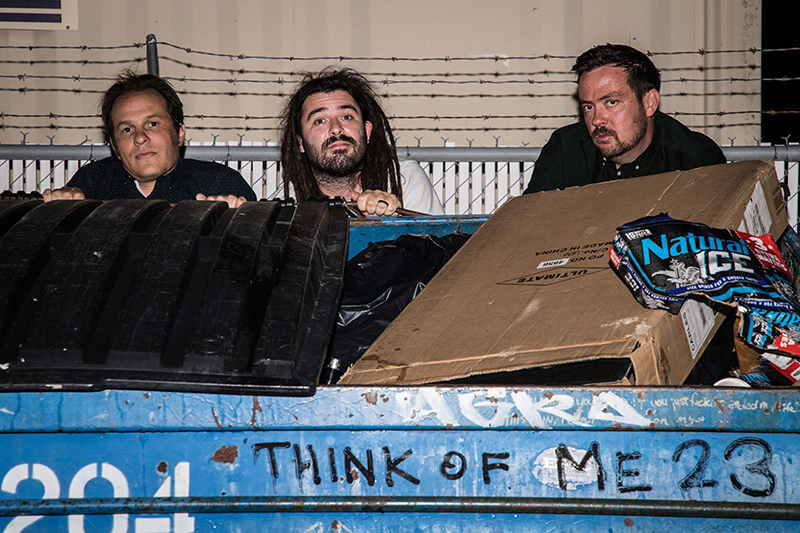 November is upon us, so let us give thanks that we can get our faces melted off at SLUG Localized to keep us warm. Together Forever and Voidsmen will kick your ass with their alt-metal stylings, with La La Diabla opening up the set. November’s SLUG Localized is a 21+ event held at Urban Lounge on Nov. 20 for $5, and is sponsored by Uinta Brewing, High West Distillery and Huge Brands.

During Together Forever’s Localized photoshoot, vocalist and guitarist Josh West finds a (mostly) empty bag of Doritos and commits to the photo, pouring the questionable contents into his mouth while vocalist/bassist Ben Dodds and drummer Whil McCutchan laugh and cringe. “We do this because we love it,” says West. “I don’t think anyone in this group is under the illusion that we’re going to be in this huge band or that we’re going to be rockstars … we play the music that we would want to listen to.”

Together Forever started in that same room at Downtown Music in which the photoshoot took place. Dodds, who was part of a different band at the time, heard McCutchan and West practicing in the next room over and decided to introduce himself. “I want to play to that because it sounds like we have a similar aesthetic,” he says, describing that sound as “punchy and angular.” Together Forever are defined less by any single genre of music and more by their trademark style of fast, attacking riffs that drive each song. “It sounds a little scary—but it’s meant to be humorously scary,” says McCutchan.

The band’s first EP, I DO, is intense and driving, with elements of punk, metal and even prog rock. One song, “Mississippi Gamble,” contains West’s rapid-fire guitar riffs over the metallic tone of Dodds’ basslines and McCutchan’s dynamic and persistent drumming. The entirety of I DO is hard and fast, oozing with a rock n’ roll attitude and intense musicality. “‘Mississippi Gamble’ is a term for when you fart, but you end up shitting your pants,” says Dodds, alluding to the high-strung nature of the song.

“I feel like we’re always trying to push ourselves to do something that is challenging.”

Together Forever are currently working on a new album—one they anticipate will be a departure from I DO in both sound and process. While I DO is a collection of revitalized songs that had previous incarnations in other bands, the new album will contain more material that Together Forever worked on as a group.

“For this record, it’s been pretty much coming up with riffs and lyrics, getting together, jamming and discussing it among the three of us,” says West. Coming to practice sessions and turning a jam into a fully realized song is something that challenges Together Forever as musicians and keeps their musical ideas fresh. “This new record will be our first batch of songs we’ve written with no preconceptions,” says Dodds.

This songwriting process can be arduous when it comes to writing the lyrics, particularly so for West. While songs like “Mississippi Gamble” have an obviously humorous touch, other lyrics often pull from a more serious place, such as his experiences as a father or the issues he deals with in his everyday life. While he normally describes Together Forever as a “noisy punk band” when people ask, he says that the lyrics are often what bring Together Forever a little out of normative punk rock subject matter. “We’re just people on the earth,” West says, “kind of dealing with the climate of what life is right now with everything that’s going on … As far as writing the lyrics, it’s been a catharsis of how I cope with what’s happening right now.” Together Forever are a release of artistic energy that, as musicians who have been in numerous other bands before, they express through the democratic songwriting process. “I feel like we’re always trying to push ourselves to do something that is challenging,” says Dodds. “Sometimes these songs take us a long time to perfect. The simple stuff is always the hardest.”

As for Together Forever’s live show, expect what you hear to be up to the standards of their recordings. “We try to keep everything as close to the recording as possible because we try to record live,” West says. “It should sound like it does when it’s recorded, ideally.” With the high energy of Together Forever’s music, McCutchan also says to expect few stops for talking, and to hear the best of what Together Forever have been working on. “It’s a little sweaty,” he says. “We try to play music through the whole .” In anticipation of the upcoming album, check out I DO on Bandcamp at together4ever.bandcamp.com as well as Together Forever’s upcoming performance at November’s Localized on Nov. 20 at Urban Lounge. Doors are at 8 p.m., music starts at 9 p.m., and it’s $5 at the door.

Local Music Review: Together Forever – I DO
Localized: Lord Vox