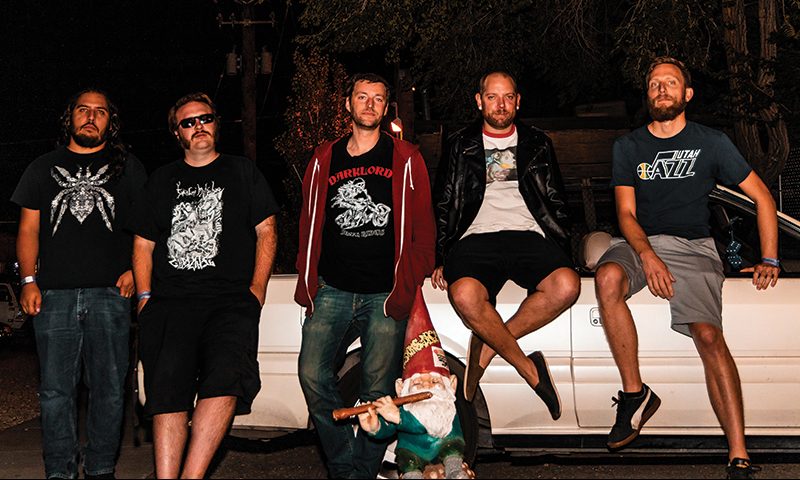 November is upon us, so let us give thanks that we can get our faces melted off at SLUG Localized to keep us warm. Together Forever and Voidsmen will kick your ass with their alt-metal stylings, with La La Diabla opening up the set. November’s SLUG Localized is a 21+ event held at Urban Lounge on Nov. 20 for $5, and is sponsored by Uinta Brewing, High West Distillery and Huge Brands.

You could stake the claim that Salt Lake–based Voidsmen are strictly a metal band, but you would only have one finger on the pulse of what the band is about. “I can list a lot of things that we’re not,” says Taran Leu, guitarist, who mentions Leviathan as a songwriting influence for himself and Deftones as a big influence for fellow guitarist Todd Garcia. Bassist Kyle Ruff likes to deconstruct the influences that he sees coming through on guitar in the songwriting process by changing the schematics with his bass riffs. “You can call it aggressive sludge,” he says. Along with Matty Bennett on vocals/keyboards and Jason Fairclough on drums, Voidsmen balance the blast beats and chromaticisms of metal with harmonious moments, marking the band as a highly versatile, solid blend of genres.

One of Bennett’s friends suggested that they are metal for non-metalheads. “That’s pretty spot on,” Bennett says. “Most of the people who like us are metalheads, but there’s a lot of variety that we throw at you. There’s a lot of ‘pretty stuff’ in there as well.” Leu, who recorded and mixed Voidsmen’s 2018 self-titled EP, says that for him, there were a lot of moments where he thought, “What would Pink Floyd do?” For Fairclough, Voidsmen’s influences and genre definition are ever-changing, based on anything that anyone in the band is listening to at that given moment. “We explore different genres,” he says, “but it’s metal.”

“None of us feel like there is one person trying to force [anything], so it’s really fluid.”

Voidsmen songs tend to range in length from the five- or six-minute mark to well into the 15-minute range. Each song, like a chapter in a novel, goes through a series of “moods,” giving the band a unique feel and sound. “We play with metal bands most of the time, and a lot of our songs start out thrashing. People are expecting some metal show. But then, sometimes, we’ll have a six-minute section that [has] a lot of harmonic accents on the guitar off of one note on the bass,” says Ruff.

For the rest of the members, the metal influence looms in the background, but the most important element for the band is the story being told. “[Garcia] always has actual shit he’s trying to express with his riffs,” says Leu. “It’s always [about] space and dragons.” Bennett, who travels with his songwriting notebook, says that while some of the earlier Voidsmen songs contained lyrics based on stories like A Game of Thrones and Final Fantasy VII, the upcoming album is going to contain one singular story in more of the science fiction realm. “It’s about humans leaving planet earth because it’s too polluted,” he says. “[They go on a] ship to go repopulate this new place, which will be our new earth, essentially.” For Ruff, who has performed in bands like Visions of Decay before with the Leu and Fairclough, the songwriting process for the new album was cooperative from the start. “None of us feel like there is one person trying to force [anything], so it’s really fluid,” he says. “[Garcia] puts a lot of direction to it, so it works really well. We try to make what he’s doing not as straightforward … It kind of morphs into something new.”

“… That’s a great feeling: [playing] something for someone who has never heard it before and have them [be] hyped on it.”

Voidsmen are currently recording their upcoming album at The Boar’s Nest with Andy Patterson, who, Leu says, is the “ideal” person to record them. In addition to recording their new album, Voidsmen had been spending time preparing for Crucialfest 9 this past September, at the time of this interview. Voidsmen also performed at Crucialfest Showdown earlier in 2019, where they had a chance to test out their new material. “I really feel like we won that crowd over, playing our brand-spanking-new material, and that’s a great feeling: [playing] something for someone who has never heard it before and have them [be] hyped on it,” says Bennett.

As for the upcoming SLUG Localized, Voidsmen promise to bring variety, versatility and unrelenting metal mixed with the “prettier” moments. “It will start and end with heavy, hardcore-influenced metal, but with so much pretty stuff in there,” says Bennett. “Clean guitar, clean vocals—I’m all about that stuff. That’s kind of what Voidsmen is about, too.” Voidsmen can be found at facebook.com/voidsmen and their self-titled EP can be found on tribelessrec.bandcamp.com.