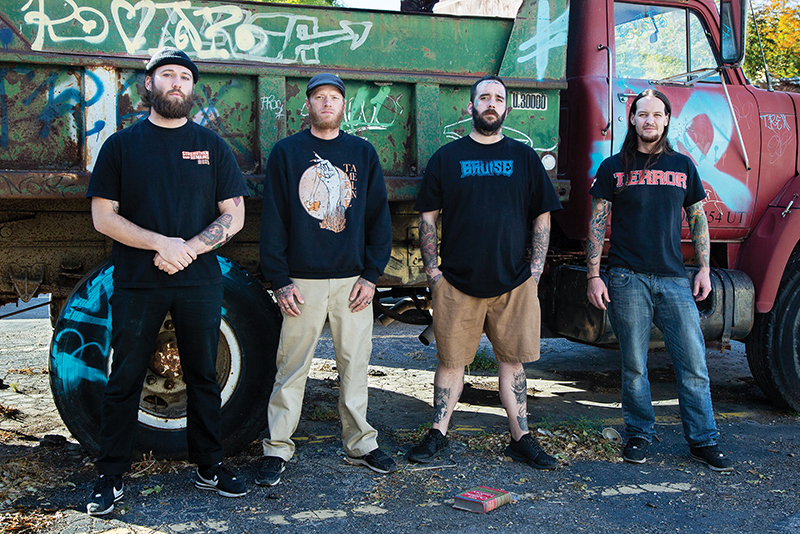 Localized: The Wake of An Arsonist

December’s installment of SLUG Localized is a perfect way to get your dose of heavy music in. Featuring The Wake of an Arsonist, Hemwick and 2-Headed Whale, these bands will surely bring the heat to a cold winter’s night with sounds ranging from doom to metalcore. Put on your moshing shoes and meet us at Urban Lounge on Dec. 20. SLUG Localized is sponsored by Uinta Brewing, High West Distillery, KRCL 90.9 FM and Spilt Ink SLC.

The Wake of An Arsonist are coming up as one of Salt Lake City’s heaviest and most pulverizing bands this side of the millennium. Consisting of tattooed, bearded guys who’ve been in SLC hardcore since the days of xCLEARx and Cool Your Jets, they have stayed in touch with new remedies just enough to connect with younger blood while still calling back to the days of old. As we tailgated on vocalist Sean Dugger’s truck in the back of Raunch Records, we spent about 60 minutes making wisecracks, slurping down coffee, gushing over our friends’ bands, talking about where to find weed and leaving heartburn medication for Santa instead of cookies, and—at some points—managed to get some words in about their band. Suffice it to say, it was a fun time.

Named as a metaphor for the bridges we burn and the paths that are created as a byproduct, The Wake of an Arsonist started as a doom band with Dugger on drums, Bobby Doyle on guitar, Matt Hardy on vocals and Jason Dunstan on bass. About a year ago, TWOAA went through an incredulous lineup change resulting in Dugger switching his place behind the kit to the microphone. “I’ve been asking to get back on vocals forever,” says Dugger. “It was a neat transition.” With that, the band recruited Camron Sherwood as the drummer and Martin Theisen on bass. Theisen never intended to join TWOAA, but was attending practice sessions for the project Humanity Lost with Doyle, Dugger, Kole Campbell (Deep Romance) and Billy French (Cherem). Eventually, when people stopped showing up to Humanity Lost practices, Doyle and Theisen would start playing TWOAA songs together, which convinced him to join the band. “This is the best lineup of a band I’ve ever been in,” says Theisen. “The chemistry clicks—we get into our spats mostly because these two (Dugger and Doyle) are like two dumb pit bulls barking at each other through a fence.” Doyle adds that he and Dugger will miraculously find a way to argue even when they agree on something.

As new members solidified themselves within of the band, new sounds started to evolve on top of the four existing songs from the previous lineups, adding speed, volume, density and chaos. “We had talked about doing this evolution before, and it worked out perfectly,” says Sherwood. Funneling out the noise and dominant rhythmic forces of sludge metal and adding the in-your-face ferocity of hardcore, the crawling, noisy riffs feel as if they were lifted from early metalcore (think Disembodied or Snapcase) on top of what’s left of the doomy progressions with Hatebreed-style breakdowns—you can begin to fathom the sound that these guys secrete. “Whenever people ask me what kind of music it is, I can’t tell them,” says Theisen. “It’s heavy. It’s one of those things you have to experience, and you’ll just get it.” TWOAA’s sound is not trying to be pretty or pleasant to anyone. It’s ugly, murky and unsettling—it’s a beast that charges, baring its teeth and doesn’t give a fuck about whatever marks it will leave.

TWOAA released their first single, “Grade,” earlier this year, which came out on the Utah Underground Compilation. It is two-and-a-half minutes of what feels like oozing municipal sludge covering and swallowing anything it comes into contact with. They’ve got three more on top of that ready to be released in December. They recorded in the Boar’s Nest with Andy Patterson, and the release is slated to be quite a sonically thick spectacle. “It works perfectly because it’s the older stuff and some newer ideas we’ve been working on,” says Doyle. There’s also one more waiting in the wings, the first song they’ve written as a cohesive unit, which will be released on a potential EP for 2019.

The band’s collective musical output differentiates them from any of the other heavy bands in SLC. “We don’t fit into any genre,” says Dugger. “We’re definitely not a scene band.” However, the suffix “core” is something that comes attached to most heavy bands forming today, including those inspired by subsequent genres like metalcore, hardcore, grindcore or mathcore. “I grew up listening to hardcore and grindcore,” says Doyle. “It makes sense that [our genre] would have a ‘core’ at the end of it.” Being that the band’s genre is so fluid, they can fit on any metal or “insert adjective here”–core bill—and this month’s Localized is no exception.

Dugger says this show features the three different extremes of Salt Lake City’s current exhibition of heavy music—the unfiltered pummeling of TWOAA, the instrumental narratives of Hemwick and the atmospheric drudge of Two-Headed Whale. It’s set in stone that this Localized will combine as TWOAA’s EP release show—they’ve made it a point to get their music out in a setting where they know people will be able to connect with it and be able to take home a piece, so you all best make it a point to get your asses out to Urban Lounge and indulge in these moments with us on Dec. 20 at 8 p.m.