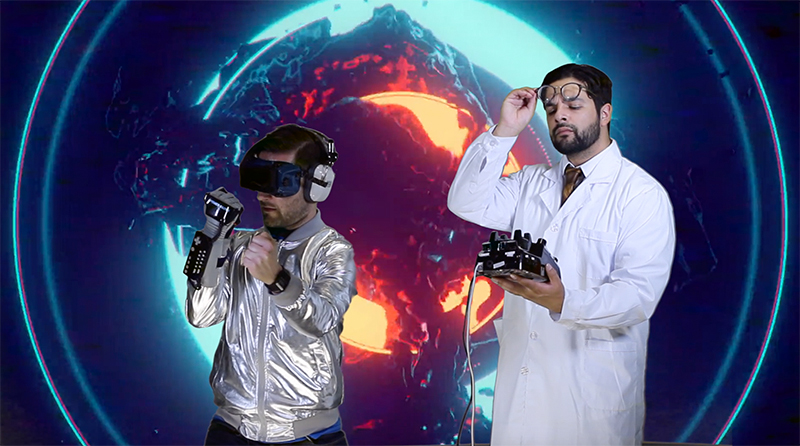 As Conquer Monster, Daniel Romero and Josh Faulkner create bombastic synth pop with highly nostalgic overtones. Known for their use of synthesizers made out of old computers (specifically the Commodore 64 and an old-school Gameboy), the duo don’t longingly glance back at the past as much as they do dig it up; exhume its disparate parts and crush the whole thing up into a neon balloon that’s equal parts reverence for the music of an earlier time as it is a winking pastiche full of 21st century irony. The group’s latest and arguably largest undertaking is an audiovisual collaboration with the Clark Planetarium titled Outerdimensional Exploration. The show premiered about a year ago, has been shown at the Ott Planetarium in Ogden and is returning to the Clark for a second run on Nov. 8–9.

Outerdimensional Exploration came about as the fruition of a string of increasingly involved multimedia projects and collaborations. Comic books, music videos, ballets, concerts with wall-sized projections for the Utah Arts Alliance all led up to the eventual connections with the Clark Planetarium. “Every time we’ve collaborated with someone, it’s sparked another collaboration,” says Faulkner, adding the group’s hopes that the momentum for this film continues to grow. “If we could kind of break out in to this weird, niche planetarium scene, I think it would be awesome,” says Romero with a laugh.

While Faulkner and Romero are cagey about giving away the details of Outerdimensional Exploration’s plot, Faulkner summarizes the show as follows: “We play two robots. The idea is that the audience comes in, they just purchased us and they’re watching a training film on how to manipulate space time.” With different training modules interspersed with live music and, in Romero’s words, “melt-your-face visuals,” the whole performance accomplishes Conquer Monster’s aims of immersion. “[We] let the audience get lost in the narrative then pull them back out. You’re watching this theatre-sized movie, then you go full dome and it really captures you’re eyes,” says Romero.

Anyone who’s encountered Conquer Monster’s music can attest to the inherent sci-fi bent and saturation of ’80s kitsch—a quality that permeates both their chiptune-inspired music and the “VHS” visual aesthetic found in all of their projects. As the plot summary suggests, Outerdimensional Exploration is no different. “I really like the hyperreality [of ’80s sci-fi],” says Faulkner. “Especially when you go back and watch an ’80s movie, everything’s super hi-tech. But as you’re viewing it in 2019, you’re like ‘that’s really bull.’” Like the surreal comedy of Look Around You, Conquer Monster’s narratives (both musical and visual) evade easy categorization. Faulkner hopes the audience of Outerdimensional Exploration feels “in on the joke” and are able to laugh at the purposefully anachronistic makeup of the project as a whole.

“I like the way that [these different forms of nostalgia] play together in a gritty meets pretty way.”

Similar to their multifaceted approach to the history of science fiction is Conquer Monster’s understanding of nostalgia. For Romero and Faulkner, nostalgia is not a unidimensional feeling, and they find that their art looks towards the past with varying degrees of remembrance. “Mine’s kind of the gritty, deep nostalgia. It’s a very specific nostalgia,” says Faulkner. “Daniel, when he’s playing his vintage synths, gives it more of a grounding in reality, and it’s a little more serious. I like the way that they play together in a gritty meets pretty way.” Add the humorous take from Outerdimensional Exploration’s visuals, and Conquer Monster’s uniquely bizarre take on remembrance and homage takes form.

From start to finish, Outerdimensional Exploration was created over the course of three short months. “We were working right up until the show,” says Romero. “We were just crazy busy. I was going to the planetarium a few times a week—just rendering film, changing things and editing the short film. It was hectic.” However restrictive these time constraints, they were just the push Conquer Monster needed to make a real project out of what had initially seemed like a pipe dream. “Being forced with a deadline to come up with something really helped us flesh out some of the details we’ve been working on, or maybe had been sitting on for a while,” says Romero. “We just needed to finish it.”

“If we could kind of break out in to this weird, niche planetarium scene, I think it would be awesome.”

While such a massive undertaking on such a tight deadline might’ve helped give Romero and Faulkner the push they needed to turn Outerdimensional Exploration into a reality, the multiple showings have given Conquer Monster a new insight on what form they ultimately hope the project takes. “We’re really trying to refine it,” says Romero. “We have plans to reshoot and redo some things to up the quality,” all leading up to the hope of an eventual nationwide release at planetariums around the country.

Outerdimensional Exploration is playing at the Clark Planetarium on Nov. 8–9 with performances at 6 p.m. and 8 p.m. The event is free, but be sure to arrive early to secure seating in the dome.