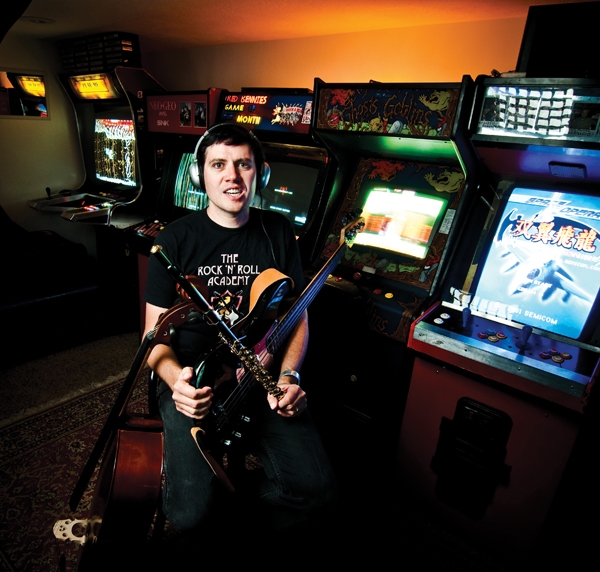 When he’s not busy being a father of twins, fixing up his house, performing with several bands, or up late playing arcade games in his basement, Dave Payne is at the helm of his very own recording studio known as Spaceship Arcade Studio. Music runs deeply in the Payne family, including Marvin Payne, Payne’s father who had a music career in the 1970s. Payne and three brothers, Joshua, Joe and Sam, reformed along with their father as Marvin Payne and the Gifted Seed to play Marvin’s old music in a live setting. Marvin never had a full band to play these songs entirely live until recent years. Some of the prestigious bands who have been recorded by Payne include Red Bennies, Coyote Hoods, The Glinting Gems and Ether Orchestra. He also helps run a music school for children called Rock n’ Roll Academy, located just north of Salt Lake City, where people of all ages, currently ranging from 7 to 40, come from all over to learn everything about music.

“Your perception of music is more than just ears.” Payne says, when explaining his philosophies on recording music, “You aren’t trying to capture what it sounds like, but you’re trying to capture what it feels like, which is a very different experience.” He’s been recording music for over fifteen years, starting with a 4-track recorder, and then moving on to ADATs (Alesis Digital Audio Tape), which uses a VHS tape and was widely used throughout the 1990s. These days Payne prefers a computer. For multi-track recording, he started with Vegas, made by Sony, which he has also made videos with. He has since moved onto a program called Reaper, which is very similar to Vegas, but is more open ended, and provides many more options to the end result. “The thing that really bothers me about modern recording culture is that people go equipment crazy, including program crazy,” Payne says. This includes many majorly popular applications such as Pro Tools, Sonar and Cubase, all of which exceed several hundred dollars in price. “You can get plugins and programs that are phenomenal for free.”

Compared to many others, Payne’s recording techniques are somewhat unconventional. Setting up everything to get the most pristine sound out of the recording is something he tries to avoid. “I think the whole concept of trying to construct something that sounds so much better just to capture live is blasphemous. I try to only do live recording, and or at least only first takes.” Much of this is to avoid making a recording that sounds overly polished. “The better you are at making something good, the better you are at stripping the personality away.” This is where Payne’s affinity for computer software comes into play. While many recording studios that lean toward a rawer or more visceral sound will opt for analog equipment or older methods, Payne prefers to get those same results during those first take recordings. “Musicians pay big bucks to have someone capture your music as stylistically neutral as possible, I prefer to do it as stylistically as possible for cheap,” Payne says.

“I try to record in a way that is a little more sculptural, meaning once you have the recording you can mess with it. The mixing is the big part. Recording the tracks is no big deal to me, but mixing them really well on the computer is the major part.” The mentality of sculpturing plays a large part on how Payne approaches recording. “I approach recording like a lump of clay, then you see what you can do with it and present it in a nice way. If you’re working with paint, it’s ‘just colors,’ but then you make them into lines and they become ‘just lines,’ and then you make them into shapes and they’re ‘just shapes,’ but all those shapes combined have many distinct emotional implications to the listener.” The subjectivity of these implications is important, because they can convey everything from the overall mood of the album as a whole, or a specific song, or a specific moment in a song. “I took a sculpture class in college where we talked about elements of ‘subject matter’ where people will respond to images differently and also different elements of ‘form’ and how people perceive things differently on an instinctive universal scale,” Payne explains.

These elements of form are crucial to Payne’s recording style, and the results show strongly in his work.