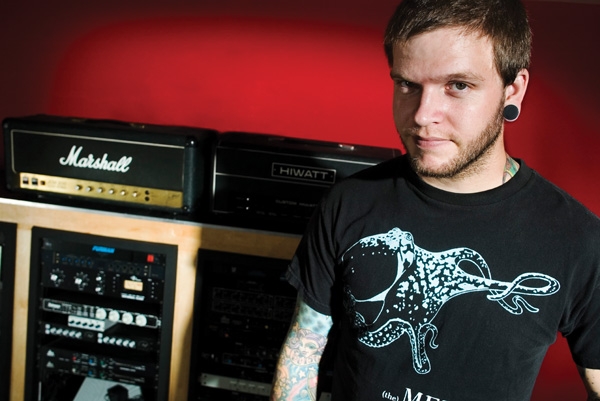 When an average person walks into a room, they don’t think about how it could potentially be set up for proper sound diffusion, if the space has adequate reverberation time for the size of the ambient and/or if it is provided with low levels of reflection. Jud Powell can’t help but think about all of these factors and more.

A few years ago Powell was recording an album with his band Le Force and found himself wondering how everything worked. Not just the music recording process, but the kind of equipment needed for such an occasion. “I was interested in knowing the how, why and what to do, etc.” Powell says “The original reasoning behind B-Sides Studios was to be more involved in the recording process of my own music. I’m not trying to take over any sort of market––or compete at all, but to make a studio that was affordable for people just like me who want to make a bitchin’ record and have it be cheap. I know it’s tough out here.“ Powell also wanted to keep his studio very private and thought it wise to not wave it around in anyone’s face. His honest goal was to simply get people more involved in making their own records. The allure of owning and running his own recording studio was so uncompromising that he started to compile equipment as quickly as he could.

As a recording studio, Jud Powell’s spot is the only locally owned, all out board-analog studio in Salt Lake City. The difference between B-Sides Studio and everyone else’s in the city comes down to the fact that he hates computers––or just has an adamant disdain for them. Using his “analog-only” gear offers the musicians who record there a chance to make a one-of-a-kind sounding album rather than a mechanically reproduced body of work made to sound like it was polished to perfection. He uses his profound technical know-how to man his Trident 80 console, which offers a legendary sound that has been behind so many classic hits (The Beatles used the same console in the late 60s), and naturally, it has that ‘retro’ look and feel of sheer quality, but it also has many advances that you would want to see in a modern console for today’s recording needs. He also uses a 24 track with a two-inch analog tape machine and all classic outboard gear. In short, Powell knows what kind of gear to buy and how to use it.

Powell’s most recent recorded piece of work is Famous Last Words by Cornered By Zombies, a hard hitting and heavy album written by Basil Eiseman and Jason Denney. “We recorded the whole album in a couple of days,” Powell says, “I mixed it in a country and jazz studio.”

Jud Powell is not your regular monkey engineer pressing buttons all day. He literally pushes the musicians he records to extensive limits by making suggestions for them to record in more unconventional ways than they’re used to. “I want more out of the album than most musicians do. I never do the same thing twice and I have never tried to copy another person’s record. Some bands get very uncomfortable when I recommend that they use different amps or gear that they’re not used to,” Powell says. It’s clear to see that he has a no bullshit attitude, but he is also open to whatever the band is willing to do. “The gear is secondary. It’s all about the musician’s talent. I have always stressed the player side of recording because it keeps ‘me’ from getting lazy.  I get people to play for hours and hours, yes, it wears people out and the first and second takes are usually the best, but people are as good as they play. Most musicians are fairly consistent.” Powell says, “I don’t do click tracks or layer cake jobs anymore. I want to get something different every time.”

Now that the new and improved B-Sides Studios is finally re-vamped and open for business, Powell is now ready to take on more clients. “I’m kind of bummed that I didn’t do this years ago,” Powell says regarding the new additions. B-Side Studio is an “L.A. style” dual level space filled with classic recording equipment, tube preamps, compressors, tape echoes, peddle boards, Marshall stacks, Ludwig drums, maple drums, a bad ass console, monitors and everything else you need to make your album sound great. Upstairs is where you can find the control room all set with a slope in the ceiling that is downright acoustically pleasing. Powell says, “I wanted to be isolated from the sound source so I can get the sound I want.”  Downstairs is one huge room measured around 26’x 20’ for the bands to track their sounds.

If you are looking for a hands-on recording experience and don’t have a lot of funds, give Powell a call. He should be open.