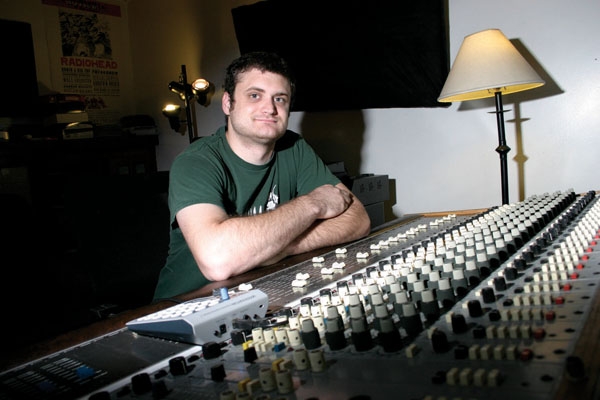 Wesley Johnson recorded in various basements before putting together his own home studio.
Photo: Ruby Johnson

Wesley Johnson, owner/founder of Archive Recordings, became interested in recording at age 13 when his band, Quiet Color, began visiting local studios. “I had a blast in the process of it. Naturally, I started hanging around sessions, then took on an apprenticeship [under Matt Mateus] at Spy Hop in 2003,” says Johnson. During this apprenticeship, he met Tate Law and Jeff Adams with whom he eventually started the band The Lionelle. After completing his apprenticeship at Spy Hop, Johnson started recording in random basements. In 2006, he moved into a house, altering four rooms into a comfortable studio where he records with friend and bandmate Jeff Adams.

At only 21, Johnson is already making a living recording full time. “I work well with bands my age. It’s easier for them, compared to working with somebody much older. They feel more comfortable, which helps the outcome of their music.” Johnson makes it clear that he’s not just the guy in a band with a studio though, “I’m an engineer, not a hobbyist.”

Johnson took Pro Tools Certification classes in California after graduating high school and did a two-week workshop in Nashville with metal producer Michael Wagener (Metallica, Dokken, Alice Cooper, Accept). Johnson says that experience is a crucial part of recording. “Even for people without all the high quality equipment, if you know what you’re doing, you can get a great sound. You just have to do it.” Archive Recordings is equipped for any genre or small project. “We have all the standard supplies to make an awesome recording. Bands are always welcome to bring anything they want to try out. I never turn down an idea,” says Johnson.

Johnson plans to continue saving so he can eventually expand into a larger studio and achieve the stability of recording bands for weeks or months at a time. “If that doesn’t happen I’m not going to complain and quit. I’ll keep doing everything as long as I enjoy it,” says Johnson. Whether it’s recording, mixing, mastering an album or laying down a few drum tracks, he’ll do the job.