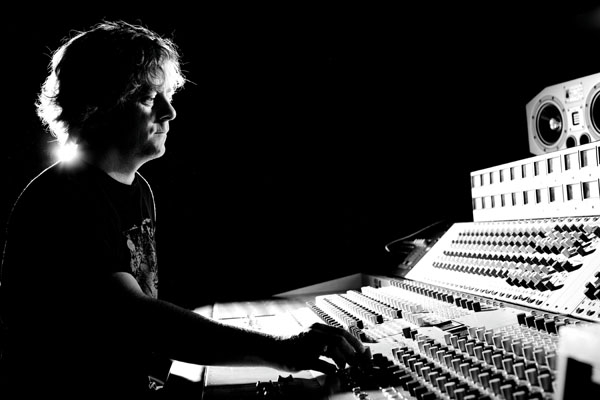 Terrance DH’s introduction to recording was an accident, really. In the early 90s, his band Bad Yodelers were recording with an engineer who had a bad habit of disappearing for three to four hours at a time. “I was the singer in that band and the vocals during a recording session usually get done at the end,” DH says. To deal with the engineer’s disappearing act, the Yodelers’ drummer, Brent Peacock, sat Terrance behind the console and taught him the basics of recording. “I would hit play and record and they would do takes of their drums,” DH says.

For a few years DH bounced around from studio to studio learning as much as he could from various engineers. “I felt like right from the get-go I had a knack for what a song needed. And being a musician, I [felt I] could always really help the musicians through past experiences of mine,” DH says. Terrance has been involved with the local music scene since the late 80s, spending time in The Stench, Bad Yodelers, Top Dead Celebrity, Magstatic and most recently Danger Hailstorm.

DH found himself hanging around Counterpoint Studio about a decade ago. “I would dump garbage, put away microphones and wrap cables.” DH says. He knew where everything in the studio was and after a while, when he wasn’t around, “[The engineers] were asking ‘where’s Terrance?’ like they needed me. I worked my way into it really, and lucked out,” DH says.  Eventually Gianni Skolnick (Counterpoint’s CEO) hired DH to work as an engineer and the studio manager.
Although Counterpoint opened 14 years ago, according to DH the studio has only just reached Counterpoint CEO Gianni Skolnick’s initial vision. “It’s the best it has ever been­—right now­ we’re at our peak,” DH says.

Over the past few years the studio has gone through some major changes. The addition of the 32 Channel Neve 5088 analog mixer allows DH and the other engineers at Counterpoint to mix the traditional way instead of spending hours staring at a computer screen. “I think you listen better [when] you don’t look at the waveforms and it just warms up the signal.” DH says, “It’s just more magical. I don’t know why, but the computer takes the magic away or sucks it out of you.” All it takes to understand this magic that DH speaks of is a listen to the Danger Hailstorm track “Bouncer.” Michael Wagener (“one of the biggest engineers in the world,” according to DH) recently rerecorded the track as part of a recording clinic held at Counterpoint. “We did one song for seven days. It turned out so good. He rearranged the song and everything. It was an amazing experience for me. I learned so much,” DH says. The result is nothing short of mind blowing––the sound resonates off of the walls of the studio and feels warm, organic and encompassing.

Creating a comfortable work environment in the world-class studio is where other changes have stemmed­––like the addition of a studio bong and a pool table. According to DH, many local bands don’t feel like they can afford to record in a multimillion-dollar facility like Counterpoint. “[Counterpoint] is so nice and it scares a lot of bands, but then they come here the vibe is so good. It’s like it’s their studio,” DH says. DH’s recording rates run $70/per hour, which is steep compared to low-end studios, but incredibly reasonable in the big scheme of things. “If you’re ready and we knock it out and capture it, [your album] could be done easily for $500, which is nothing. In 1987 [bands] were allowing $1000 to do a record,” DH says.

The good vibes that exude from DH and the Counterpoint space have drawn in numerous local bands, national acts like Air Supply, Sum 41 and The Used, but also other local engineers. Andy Patterson, Michael Green and Matt Winegar have all spent time using the Counterpoint facility. “We love other engineers to come here and work. Use our studio for tracking and to get the benefits of it.” DH says.

After playing in local bands since the late 80s, DH estimates that he has recorded with over 40 different engineers. “I learned a little bit from all of them––their flaws and their strengths.” DH says, “A lot of people are really un-fun to record with. It’s like a science to them and they don’t want to talk about it.”

DH’s goals when it comes to recording seem to mirror the environment of Counterpoint. He wants his clients to be comfortable, involved and have a good time. “Creativity is the top priority for me. That’s when the magic starts.” DH says, ”The band is seeing their vision, rather than me making them sound like I want them to sound.”