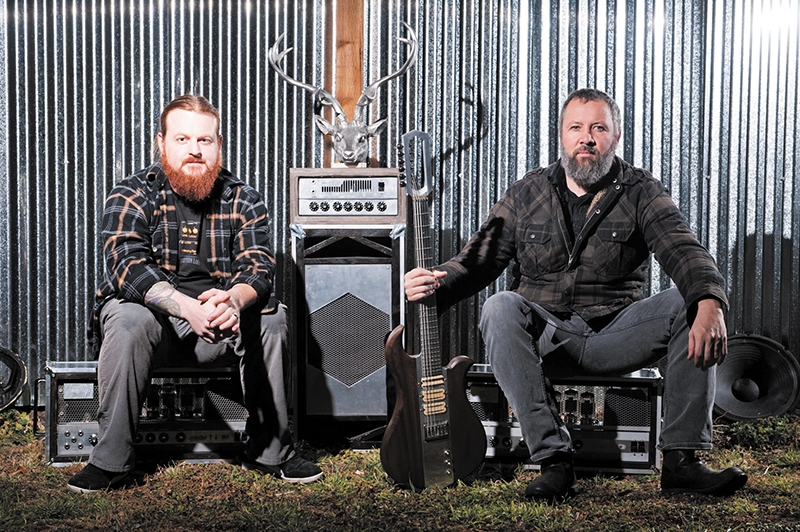 If you have been to a metal show in Salt Lake sometime in the past 10 years, you have seen Eagle Twin. You have heard Eagle Twin. You have felt Eagle Twin. The duo of Tyler Smith and Gentry Densley are known for bone-shaking performances, melding deafening doom metal with improvisation, brutality with artistry. When you’ve seen, heard and felt Eagle Twin, you’ve probably also seen, heard and felt the unique guitar cabinets flanking Densley and Smith onstage. These giant metal beasts (the cabinets, of course), featuring hexagonal shapes cut out of the faces, are becoming more commonly seen, not only at metal shows in Salt Lake, but around the country—and sometimes around the world. It should come as no surprise that when they aren’t melting faces and rattling brains with their music, Densley and Smith are building cabinets under the name of Hex Cabs so that others may do the same.

Hex Cabs unofficially began in 2009, when Eagle Twin embarked on a national tour with Sunn O))), but the seeds of the project were planted earlier. Densley and Smith are veterans of the Salt Lake music scene and certified road warriors. While on tour, they came into contact with Knoxville, Tenn., band New Brutalism, and were struck by their commitment to building their own gear—guitars, amps, cabs and drums. “We’ve always been really drawn to the whole DIY thing,” Smith says. “You can do anything you want by yourself, even if it takes you a while to get there.” So, when Sunn O))) asked Eagle Twin to bring some additional cabs on that tour to help boost their massive backline, Smith and Densley jumped at the opportunity to build their own.

For the tour, Densley and Smith built a 4’ x 12” cab and a 2’ x 15”. “We learned a lot on those first two, but I think all of our ideas were in place,” Densley says. Rather than building wood-based cabinets like most companies, Hex Cabs uses metal edging to make their cabs more durable and more road-worthy. The duo teamed up with Josh Stippich of E3 Modern to cut the metal and create the iconic hexagonal shape on the front of the cabinets. “It’s important to bridge the gap between what’s aesthetically killer and what works in a day-to-day setting. Some companies make some incredibly beautiful stuff, but you don’t wanna tour with it. Ours are built in a way where they look great, but they’re also workhorses,” Smith says. Because of the striking design, robust body and depth of sound emitted by the cabs, other musicians approached Smith and Densley, asking for their own Hex Cabs. As Smith says, “People see what Gentry’s playing and they want some of that shit.”

Since the initial two, Hex has made cabs for Andy Patterson of the “Boar’s Nest” recording studio, Mike Mason of Cult Leader, Boise doom titans Uzala and, oddly enough, Scott Shriner of Weezer. The cabs of Uzala and Shriner are especially notable: They feature intricate metal designs cut onto the front of the cabs—once again, by E3. Since the beginning, Hex has collaborated with other locals, which gives each cab and amp a unique, artisanal quality. In addition to E3, the duo have collaborated with Sri Whipple and Spilt Ink to silkscreen print the inside of their Model X amplifiers; Densley’s brother and tattoo artist Tyler James Densley to design etchings featured on their 300x amp; and, most crucially, Ned Clayton to help with etching, wiring, and the inner functionality of their cabinets and amplifiers. Of Clayton, Densley says, “He’s kind of a guru. You go to him with any question about cabs or amps or even the tiniest little detail, and he’ll tell you what you need to do. We definitely wouldn’t be where we are without him.”

Over the past few years, Hex began making amplifiers, first creating a clone of the Sunn Model T amp dubbed the Model X. “Ned Clayton does all the wiring and building and hand-winds the transformers,” Densley says. “The quality is insane. The wiring is a thing of beauty. You’re getting an amp that is a clone of these highly sought-after, 40-year-old amps, but they’re brand new.” They have also built a smaller version of the Model X called the Mini X, which Densley says is perfect for bedroom play. They have also made a 300-watt amp called the 300x, which is as beastly as it is beautiful. Illustrations of wolves, bears and snakes lie under the knobs, and a blue LED strip illuminates the tubes inside, making this thing look mean even before any sound is filtered through it. Densley also collaborated with E3 once again to create a custom metal guitar, following the aesthetic of Hex: hard and angular, yet artisanal and clearly hand-crafted. “I had been talking to Josh [Stippich] at E3 for years about making metal guitars. Finally, I managed to get [E3’s] Reid [Rouse] obsessed about it, so we banged one out,” Gentry says. “Everything on the guitar is adjustable in a way.”

Hex has definitely proved itself to be among the most unique custom cab companies. The passion for creativity and improvisation that Smith and Densley display in Eagle Twin has clearly crossed over in their approach to Hex Cabs, and their commitment to collaboration with those around them transform their cabs and amps, making them both functional and aesthetically awesome. For more information on Hex Cabs, add them on Facebook at Facebook.com/hex.cabs, or email them at eagletwin@gmail.com.