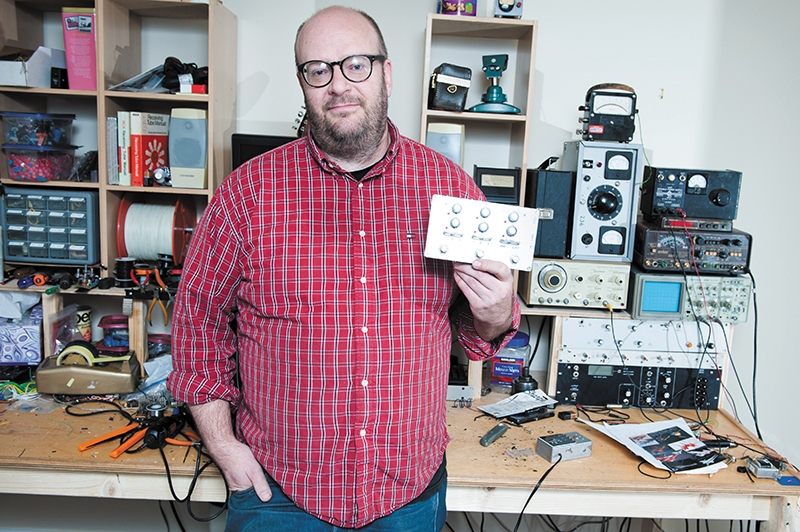 Ned Clayton makes guitar pedals and amplifiers—but in a musical landscape that is increasingly interested in flashy, new toys, he is more concerned with innovating “underneath the hood,” so to speak. “If you’re interested in cool boutique stuff with silk-screen pictures of guns, with crazy, silly names for weird rip-off pedals of things that have been around since the ’70s, I don’t do that,” he says. Instead of imitating those who have gone before, Clayton takes the approach of trying out new things in an area where a whole lot of ground has already been covered, which forces him to be creative in how he approaches the electronics he’s creating in order to make something new and great. “I like being creative in terms of the electronics that nobody sees, and doing something brand new as opposed to copying somebody else’s old designs,” he says.

Prior to getting involved in making guitar pedals and amplifiers, Clayton would buy old music gear and tear it apart to figure out how it worked and try to make it better. Initially a hobbyist playing in bands, he studied some electrical engineering in college and started making his money refurbishing old recording equipment and selling it on eBay. “I would buy cool, old desk recording consoles and take the individual channels out of them, and repackage them into a rack box … so that you could have a really nice setup without having a really giant console,” he says. Doing business this way eventually found Clayton making custom amps for Gentry Densley (Eagle Twin, Form of Rocket, Iceburn) and Tyler Smith (Eagle Twin, Form of Rocket, Clear) of Hex Cabs, the beginning of a relationship in which Clayton partners with them to make guitar amplifiers as Hex Amps.

Initially, before Densley and Smith started Hex Cabs, Clayton says he worked at modifying old amps they’d find. “Gentry was always bringing me crazy, junked amps to try and make something cool out of,” he says. “We would take old Peaveys and weird amps, and gut them and rewire them for his own use. Eventually, we were like, ‘Let’s make our own amps!’” His working relationship with Densley and association with Hex saw his work start to get out to some bigger names. “Gentry has a long history with the Sunn O))) guys,” says Clayton. “He’s been friends with Greg Anderson, who is in Sunn O))) and has owned Southern Lord Records for a long time, so they were some of the first people I made some pedals for.” So far, most of Clayton’s business has been built this way from word-of-mouth recommendations, and has even led to musicians as notable as bassist Scott Shriner from Weezer using his pedals.

At this point, Hex is still a fairly small company, and almost everything they make is custom. They have only put out four models of amplifiers under the Hex Amps brand so far, with 10–15 of each model being made at most. This low output is partly by design, wanting only to make things that are truly unique and innovative and partly due to the realities of being a small operation without any kind of mass production line. “I like the idea of making stuff that is completely novel, that is a completely new design and functional, as opposed to some cool-looking piece of electronic art,” Clayton says. “I intentionally go the opposite direction.” On the other hand, running business this way can mean inconsistent business for Clayton, who says, “Nothing that I make is in any stores.” “Right now, other than stuff I sell on eBay, if I’m making money, it’s because someone specifically said, ‘I want this.’ [It’s the] same with Hex: When we make something, it’s sold before it gets made—almost everything I make is already sold before it’s started.”

Thus far, Clayton and Hex have mainly served a niche market of musicians who want things to be LOUD. Clayton says, “The people who buy Hex stuff are mostly interested in destructive amounts of volume, and those take a lot out of me to make. Musicians don’t have a lot of money, so it’s hard to justify spending the money for all the parts and time that goes into them,” he says. To overcome their problem of powerful amps and time/cost issues, Clayton and Hex have gotten creative and started putting together a new line of Micro-T amps that Clayton says will act as a preamp to deliver power to larger amps and fit in a small size. “It’s a small, little amp that sounds incredibly good in my opinion,” says Clayton. “The nice thing about them is we’re building them in old 1960s chassis of these common tape-recorder amps that are cheap to buy, and that I can gut and build into these guitar amps.”

Looking toward the future, Clayton hopes that he and Hex Amps can start to grow into an established company that continues to make unique products. He says, “I would like Hex to be making novel amplifiers. As far as music electronics goes, that’s where my focus is.” With the Micro-T, Clayton hopes to be able to appeal to a wider audience beyond the typical “metal head” customers that Hex currently serves. “I think that these little amps could appeal to a lot of different people, even though they’re very low power, only 6 watts,” he says. “I think it’s the best-sounding amp I’ve ever heard, but that may be because I made it!”

To learn more about Ned Clayton and Hex Amps/Cabs, got to Hex Cabs’ Facebook page at facebook.com/Hex.Cabs.