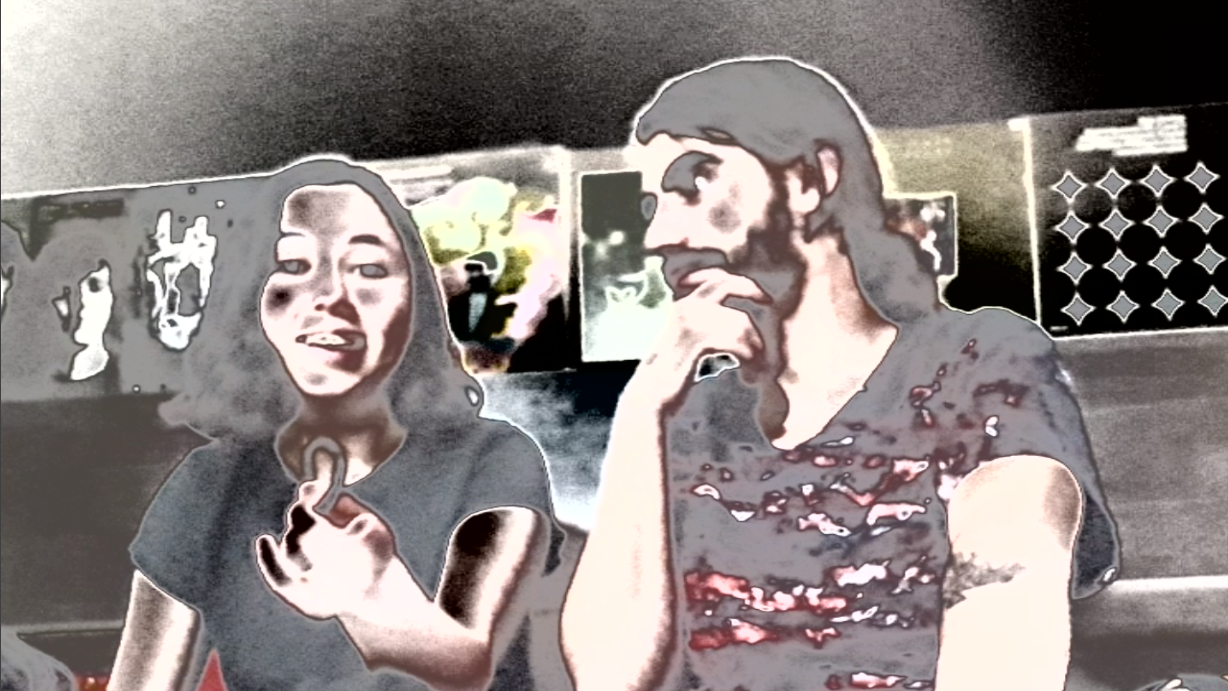 For A/C Repair School, the duo of Carolina Simionato (who releases music under the moniker soft verges) and Rafael de Toledo Pedroso (a prolific solo artist and one half of Pedroso & Pedrosa), musical expression means giving way to the urges and movements of our deepest mental recesses. Though only making music together for a year and change, their debut record, Órfãs, exists in a singular dream world built on founding principles of openness and exploration. “One of the first things me and Carol found ourselves in agreement [on] was basically realizing that making music for A/C Repair School sounded like a dream—literally, music from our dreams, as if we could access that same mindstate musically,” says Pedroso. Delivered as gritty shells of lo-fi songs, Órfãs gurgles with affecting emotions and spellbinding, enveloping music.

A/C Repair School recorded Órfãs over the few months following July 2019 by sending files back and forth between their respective homes of Paraná, Brazil, and Hamburg, Germany. In outlining their shared creative process, Simionato describes a concept that she developed with her close friend Maicon called a poética do esquecido, (“the poetics of the forgotten”): “Sensations and memories and details which might seem small, but have profound meanings and feelings attached to them,” she says. “Sometimes that’s a melancholic place to be, but there’s also depth and undiscovered beauty there.”

This liminal psychological space—between the ether of forgetfulness and the tangible heft of formative memories—reads as a foundation for A/C Repair School’s mind-altering music. Though the plethora of distortion and loose flow within and between tracks reads as distancing, there’s an honesty of expression and naturalism of movement laced into each moment. Simionato, whose vocals drive much of Órfãs, sees their wayward processes as a gradual coalescing around a shared goal of excavation. “I believe I was able to bring up so many lost memories and images and buried feelings precisely through not trying too hard to bring them up, but letting them present themselves as freely as I could. And, I think in the end, it all connected,” she says.

“Making music for A/C Repair School sounded like a dream—literally, music from our dreams, as if we could access that same mindstate musically.”

Particularly when it came to crafting lyrics, Simionato worked in an almost exclusively improvisatory framework (save for a few lines on “cachorroro (we stone)”), submitting to the pull of her subconscious thoughts and letting the music flow in bouts of unrestrained expression. She describes her writing and recording sessions as “trance-like,” finding her “just standing alone in a room, or sometimes walking on an empty street late at night,” she says. “Somehow, it was almost like my unconscious was trespassing on conscious territory and just singing things I didn’t even consciously know at the time—some of which only made sense to me months and months later, kind of like an “a-ha” moment.”

The resultant performances (sung almost entirely in Portuguese)  serve both as an exploration of Simionato’s pains and a quest for a final acceptance. From an isolated childhood in a family involved in Brazil’s Movimento dos Trabalhadores Rurais Sem Terra to her relocation to Germany in January of 2018, she found a sustained sense of “abandonment and displacement,” she says. The latter life change especially served as a cruel reminder of societal and cultural ostracism: “I didn’t feel like I was part of society, nor did I feel like society wanted me to be a part of it,” she says. “On the contrary, I felt like I had to forever be grateful for being allowed to stay in Germany as the poor, puny Latin American woman I was sometimes seen as, even more so considering my stubborn unwillingness to follow the norm.”

And on top of these feelings of isolation, Órfãs bears the mark of the musician working through the messiness of unrequited love. “I now see that at that time I was really bitter about feeling so much for someone who also shows their feelings, but then often disappears unannounced, so I was also dealing with what seemed to be the ambiguous end of that,” she says. “I still often feel lonely and displaced and sometimes rejected; some of my love still flows deep and unrequited. But, they have a different meaning, and I feel differently about it know. I now think being able to be utterly vulnerable and know how to deal with that calmly is a strength.” From this framework—searching for belonging, a sense of self and place—Simionato used the un-thinking power of song to excise these feelings and channel her art toward reckoning and healing. The revelatory concluding verse on “lá vem” offers this empowered vulnerability and fluid, shifting delivery in its most crushing form:

“Somehow, it was almost like my unconscious was trespassing on conscious territory and just singing things I didn’t even consciously know at the time.”

As Simionato sent these free-flowing vocal takes to Pedroso, the latter worked in an atypical, naturalistic production style to mirror the unique character of their collaborator’s performances: “I tried to stay as faithful to the improv recordings as I could, mistakes and all,” they say. Across the whole album, Pedroso used only an electric keyboard outfitted with a Korg Monotron, “recording the music as it echoed around the room from the amps to the mic.” The result is a three-dimensional cloud of overlapping sounds, a mesh of pittering percussion patterns and keyboard passages that glisten in the background of these fading portraits. From the languid jaunt of opener “bom emais pra ser mentira” to the droning, melismatic aria found on the closer, “estranhos em terra familiar,”  these instrumentals sound as if they’re floating up on the tails of a patient underground wind.

Instead of sounding sloppy, though, the way the melodies tumble across the beat at their own pace and mix with the outside sounds of passing cars, gushing winds and feedback gives Órfãs its defining casualness. The music never sounds forced or strained, giving each sound space to ring and resonate before patiently strolling into the next. Ultimately, this communal construction led toward a soft explosion of catharsis that lingers through each final composition. “I think everything I played ended up being a moment of emotional relief, to musically get out all the shit that was on my chest,” says Pedroso. “And Carol’s lyrics would constantly break me, just pushing me deeper to a melancholic approach to the recording and mixing sessions.”

The surreal wash of Órfãs works in tandem with its “bonus” album companion, Pity Party (subtitled “The Morning After”). Working with similarly lo-fi, hypnagogic drones, the album exists in the same general sonic realm as Órfãs while updating a few key components (namely, more electronic sounds and lyrics sung in English). “Órfãs in Portuguese means “orphans”—female orphans, specifically,” says Simionato. “I think these two albums are like orphaned twins.” Taken together, these two albums offer a profound experience equal parts confounding and comforting. A/C Repair School use their art to channel grief and melancholy into restorative expression; perhaps these sounds can serve as a balm for us, too.