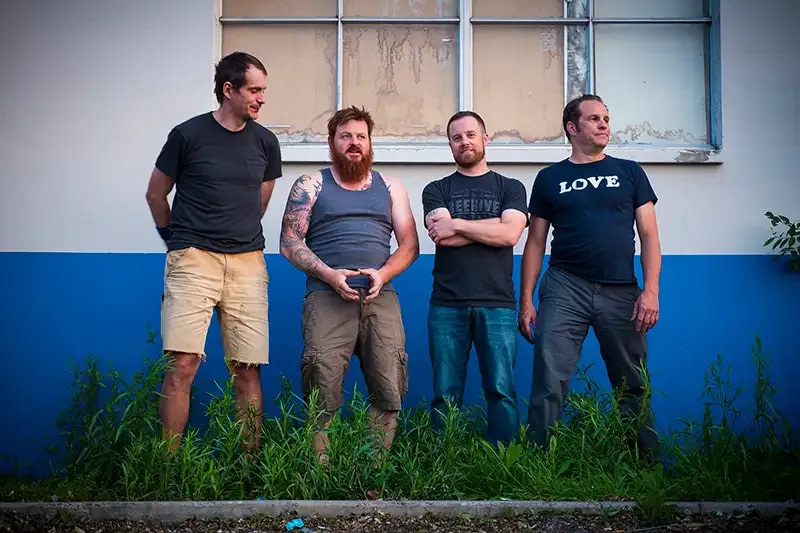 Just Don’t Give a Fuck So Much: Form of Rocket’s Tape Release

The early 2000s are here again. They’re here in the clothes we’re gonna wear, the music we’re gonna cry about and the shows we’re gonna wish we had seen. I found myself confronted with this while sitting in a coffee shop with guitarist and vocalist for Form of Rocket (FoR), Peter Makowski, talking about all the crazy-ass shows he and his bandmates played from 1999–2008(ish). Lucky for us, they’re at it again with some new shows and an upcoming release.

After their hiatus of about 10 years, FoR picked up again around 2018. “I want to say we’re more mature [now], but I don’t think that’s true. I think we are still just a bunch of big kids,” Makowski says. Part of the beauty of early FoR shows were the antics and the rowdiness. Those shows were an outlet for them. “We were always sort of outsiders. We skipped school and would walk down to Raunch Records and get SLUG, and that’s what we did.”

Their shows now are still an outlet. Makowski’s expression relayed that life is the same as it was before—whether you’re a kid or you have kids, there are still everyday troubles. “We’re all aware that we have other priorities. It’s just nice because it’s for fun with no pressure. We do it whenever we want and it makes the experience much more enjoyable,” Makowski says. “If we don’t want to practice, we don’t practice, and if we don’t want to play shows, we don’t play shows.”

“I want to say we’re more mature [now], but I don’t think that’s true. I think we are still just a bunch of big kids.”

Form of Rocket is booked for the highly anticipated Kilby Block Party this year on May 13–14th. When asked what attendees should expect, Makowski laughed: “Well, I’ve dislocated my knees like four times playing Form of Rocket shows, so I need to pace myself.” He gushed about what a cool city we live in and how people still come out to enjoy their hardcore sound 20 years later. “We just feel blessed that people even give a shit still. We just want people who are fans to come hang out with us. We think it’s special and we want to share that.”

SLUG partnered with FoR to release a tape of two of their songs originally released in the Death by Salt I and II compilation albums. The two tracks, “Keep Smilin’ Ed Smart” and “Dar un Luz,” from the band’s third album, Men, will be released again in a special tape presented by SLUG and sold at their booth at the Kilby Block Party. This time, they’ll be released with album art created by prolific Salt Lake artist Trent Call.  Makowski raved about his long-time artist friend: ”The art that he did is so good; we’re honored to have him work with us again. He is something we’ll cherish [in] having him a part of our memory of the band.”

“We just want people who are fans to come hang out with us. We think it’s special and we want to share that.”

The reason these tracks are special for this release is because they’re the demos of the songs released on the album Men. “When we went into recording those, there was no pressure,” Makowski says. “You can tell an artist is just letting go, which happens when it’s just a demo. You capture that really cool energy of people that just don’t give a fuck. That’s one of the hardest things for everyone—if they just wouldn’t give a fuck so much, some really cool shit would happen.”

Form of Rocket’s music is exactly that—some really cool shit from people who don’t give a fuck so much. They’ll be playing the Kilby Block Party at midday on May 13 with Makowski and some of the band’s original members—Ben Dodds on bass, Tyler Smith on drums, Curtis Jensen on guitar and vocals and Gentry Densley on guitar and vocals. Follow Form of Rocket on Instagram for some blast from the past content and new exclusives @formofrocket and look out for their booth at the show to purchase the coveted new tape.