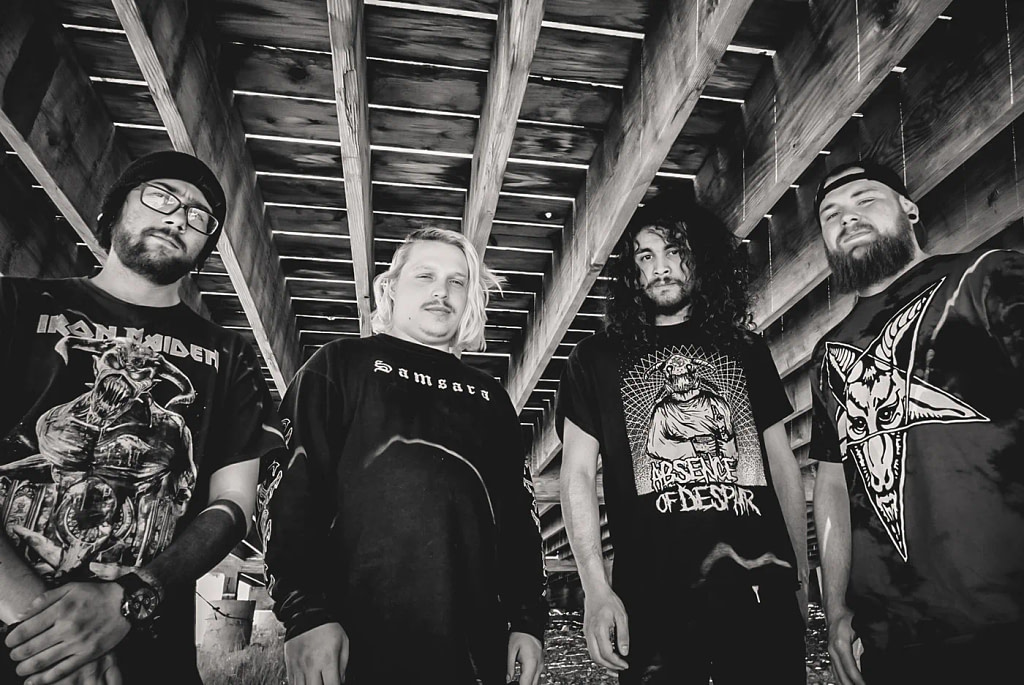 (L–R) As In Your Grave, Jason Densmore, Collin Anderson, Jose Bardales and Mason Hollinger create a sound that pulls from all corners of the metal/hardcore universe.

Localized: In Your Grave

April’s Localized Showcase takes the form of a benefit concert for Kevin Kirk and The Heavy Metal Shop, with Co-headliners In Your Grave and Anonymous alongside opener Suffocater offering distinct takes on mosh-ready riffing for just $5 at Urban Lounge on April 15 (doors at 7 p.m., music at 8 p.m.). SLUG Localized is sponsored by Riso-Geist and Uinta Brewing Co.

Emerging from the ashes of local deathcore outfit Rue the Day in 2019, In Your Grave have wasted no time beefing up and rounding out the brutal intensity they had already been honing. Founding members, Collin Anderson (vocals) and Jose Bardales (drums), have built on their former band’s template to create a pulverizing sound that pulls liberally from all corners of the metal/hardcore universe and beyond.

In addition to their clear-cut love for metalcore acts such as Kublai Khan TX and Knocked Loose, In Your Grave proudly wear their early-aughts, nu-metal influences on their sleeve, cribbing from artists like Otep and System of a Down—the latter of which the band recently paid tribute to with a cover of their 2001 track “Jet Pilot.” “Ironically enough, back then in the ’90s and 2000s, it wasn’t the most popular subgenre of metal,” Bardales says, “but when you’re in today’s day and age where genres just come and go, you have to expand and start to mesh territories together … [Nu-metal] still sparked a lot of influence for a lot of people, and you can still re-implement it today and get some really cool, new sounds.”

“In today’s day and age where genres just come and go, you have to expand and start to mesh territories together.”

While In Your Grave’s heavy-music omnivory takes center stage, the band isn’t afraid to look beyond pure headbanging fuel. Guitarist Jason “Jewnie” Densmore cites classic hard rock like Guns N’ Roses as a formative musical influence. Bassist Mason Hollinger is partial to Type O Negative’s shoegaze-y magnum opus October Rust, and the whole band appreciates EDM. “We love EDM—it’s one of our big influences outside of metal,” Anderson says. “They really go hand-in-hand.” The band is currently hard at work making good on these claims—they’re in talks with several non-metal acts, including Australian electronic producer PhaseOne, for potential collaborations in the near future. “We’ve been talking to some people here and there,” Bardales says. “We’re gonna start looking into that once we wrap up with our upcoming tour and other bigger projects.”

The band’s diverse tastes and talents for absurdly heavy songwriting have thus far culminated in two pugnacious EPs: 2020’s Enemy Lines and last year’s Graveyard Songs. The band is particularly enthusiastic about their most recent material, with Bardales singling out the track “Red Dust” as a personal favorite. “It definitely shows where we’re at and where we’re planning to go,” he says, “from the circle pit parts all the way to the electronic breakdown.”

“We love EDM—it’s one of our big influences outside of metal. They really go hand-in-hand.”

Beyond refining their craft as musicians, In Your Grave take each release as an opportunity to explore particular lyrical themes. “Our second [EP] was moreso … self-reflection, depression and being sick,” Anderson says. “Enemy Lines was all about government and war … For the lyrics on Enemy Lines, I took a bunch of hallucinogens and watched Black Hawk Down and some other war movies and just wrote a bunch of stuff down. If you watch the ‘MKUltra’ video, that’s me and Jose chilling in a room for like three days as we’re writing.”

In Your Grave’s immediate future is looking fairly jam-packed, between a 22-day tour across the western U.S. and an impending single, EP and a slew of collaborations. The band seems determined to convert as many listeners as possible, working both within and without the scene for a sound that crosses boundaries just as their nu-metal heroes did two decades ago. “You’re always gonna have people who don’t like your music,” Bardales says, “but the more we can round things out, it’s nice to genre-bend and expand our horizons.”

Read more about some of the groups referenced in this article:
Review: Knocked Loose – A Different Shade of Blue
Review: Otep – House of Secrets