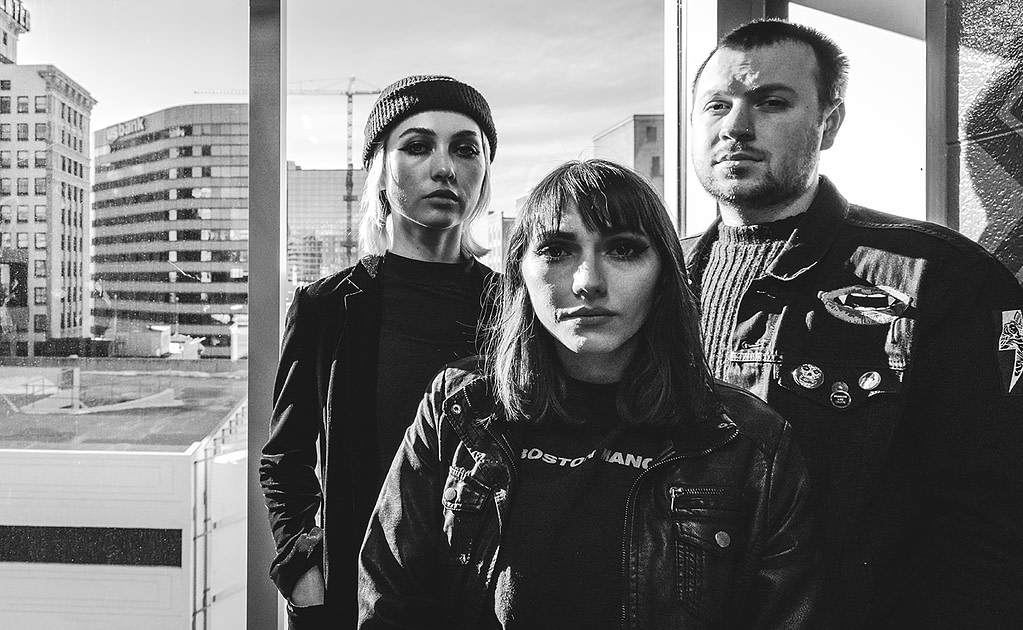 SLC punk is alive and well, and this month’s Localized Showcase Co-headliners MSKING and The Zissous—along with opener #1 Babe Team—are proof. See for yourself for just $5 at Urban Lounge on March 17 (doors at 7 p.m., music at 8 p.m.). SLUG Localized is sponsored by Riso-Geist and Uinta Brewing.

The list of ways MSKING showcases duality is long. Sam Johnson (drums) frequented Warped Tour growing up, while Miranda “Lew” Lewin (vocals, bass) was trained in classical music. Karlie Bagnani (vocals, guitar) is an elementary school music teacher by day who joins her rockstar bandmates on stage by night. MSKING’s in-your-face riffs are often paired with ultra-sensitive lyrics, and their band name itself even showcases the contradicting connotations of “Ms.” and “king.” But the three-piece is all on the same page where it counts—they’re super dedicated to each other, their band and the ’90s grunge-inspired tunes they create.

After meeting each other at Westminster College, Johnson and Lewin “bonded over existential dread” and, naturally, formed a band. When Lewin met Bagnani in class—they were both music majors—the stars aligned. “Lew was in the band with me, and then a separate band with Sam. It was like two overlapping circles of a Venn diagram, which is kind of what we’re all about,” Bagnani says. MSKING began releasing singles in 2019 and most recently released an acoustic EP, lethologica, in 2021. As passionate musicians who’ve all been trained in music theory, the trio has their sights set high—and they’re dedicated to reaching the top. “We’ve infiltrated each other’s dreams at this point,” Lewin says. “We know exactly what we want. We want to be a famous band. We want to be able to sustain ourselves doing what we love.”

“King’ is this powerful ruler presence, but ‘Ms.’ is typically soft and gentle. It’s the same with our music—we have some riffs that are very ‘pretty’ sounding, but then the chorus is in-your-face.”

In doing what they love, MSKING is remarkably intentional every step of the way. In addition to writing poignant punk songs, the trio treats every show as a learning experience. They’re also committed to being personable and unapologetically themselves onstage and online, as demonstrated by their active TikTok presence. “[TikTok is] a tool, just like anything else,” Johnson says. “You just have to find your own little section of it. We’re not going to do stupid stuff just to get famous, but as long as we’re having fun and it’s stuff we would do anyway, then we figured, ‘Why not?’”

In one of MSKING’s most popular videos, Lewin’s bandmates ask her, “Are you new here?” before throwing a Misfits t-shirt over her head—“initiating the indie kid” is a common theme of MSKING’s content. Their videos are funny, relatable and entertaining. It’s clear the trio is having fun, but they also know exactly what they’re doing in terms of marketing themselves and their music. “In 2020, I was like, alright, I’m going to scroll my life away. And now we’re on that other end, where we’re like, ‘Scroll into us!’” Lewin says.

The band also uses the platform to bring real issues to light. In another video, Lewin stares straight into the camera, her face overlaid with a teary-eyed filter. The caption reads, “POV: someone is mansplaining to you about music theory … but little do they know you went to school for four years for a music degree.” In the grunge music space, MSKING’s two frontwomen have to deal with being underestimated or belittled often. “There is a lot of weird music gender norms stuff,” Johnson says. “The men in the music scene can be really gatekeep-y. What I’ve noticed—as the man in the back watching [Bagnani and Lewin] be in the front—I see everything that comes their way. There’s a lot of mansplaining about gear and performance techniques. Or, on the flip side, it’s just complete flirting and constant message harassment. It’s not cool. We’re trying to destroy that kind of thing.”

On the concept of challenging gender norms, MSKING points to their own band name, which was originally created by taking the first letter of each of their names and adding “ing.” Once they realized the play on words, the name stuck. “It has that duality of femininity and masculinity,” Bagnani says. “‘King’ is this powerful ruler presence, but ‘Ms.’ is typically soft and gentle. It’s the same with our music—we have some riffs that are very ‘pretty’ sounding, but then the chorus is in-your-face. Some of our songs sound soft, but the lyrics have a lot of depth to them. Even one of our newest, unreleased songs, called ‘Flower,’ talks about that, about being a woman—how people will assume you’re a delicate, precious thing.”

In their songs, Lewin and Bagnani take turns singing the main and harmonic vocals. While songwriting, all three bandmates contribute pieces to the puzzle, each citing their own personal influences. For Johnson, that’s Bad Religion and Rancid. For Bagnani, Linkin Park has lasted the test of time, and for Lewin, it’s bands like the Arctic Monkeys and The Strokes. In their daily lives, the trio approaches the shared responsibility of working together in a similar fashion. “If everybody’s leaning, and we’re all tied to a rope, we’re all going to pull,” Lewin says. “If there are two people that aren’t doing well, we step in and make sure they’re okay. It’s almost like a relationship.”

Though they’re dedicated to what they love, Bagnani says, mental health is a top priority for MSKING. “I teach music as a job,” she says, “and sometimes I get home from teaching my sweet kids music all day and don’t even want to look at my guitar or listen to music. But music is my life, and I love that. And if even 10 kids walk away with a love for it, that’s great. That’s why I’m extremely motivated for us to succeed, as well—so people of all ages can look up to us and know that if you work for what you truly believe in and want to do, it will pay off.”

Be sure to follow MSKING on TikTok and Instagram at @msking.music, and listen to MSKING on Spotify.