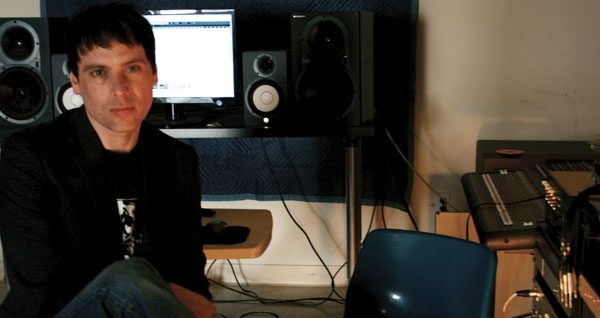 Matt Winegar is a local producer, audio engineer and musician. All this he sums up tersely as “making records.” “Lots of kids get confused by this,” he says. As he explained why this is the case, we spoke of recording studios and the state of musical technology in the broadest sense––drums and wires, but also the body parts and skills that make up the total experience music.

“Some kids don’t know what a record is.” Or what a record was. Winegar makes a strong distinction between how music is recorded now and how it has been recorded in the past. A big fan of classic rock, not just bands, but also producers and engineers. Winegar tells me about the great soundmen of a bygone era. “Today a CD can contain up to 80 minutes of music, so everyone feels that they have to fill it.” Still, some of the greatest rock albums ran only half an hour, and they provided a completely fulfilling musical experience. “There’s almost too much music now,” Winegar says. Maxing out is certainly an option, but it shouldn’t feel like a necessity, he tells me.

Maxing out can also take the form of compression. Compression, Winegar explains, is the digital manipulation of volume dynamics. Instead of natural peaks and valleys, you get one cinder block of sound. It’s everywhere. “I think the trend began with 6-CD changer. Everybody wanted to sound louder than everything else in the machine,” Winegar says. This led to what Winegar calls the “internet volume wars,” in which every band is always way up in your face, but has almost nothing to say. Winegar calls this “fake-raw”––like painting a hamburger pink.

Winegar prefers the sincerity of early recordings. He puts on a copy of Lou Reed’s Transformer, produced by Mick Ronson. The first thing you hear is the humanity of the vocals. Instead of a single block of icy “vox” I can hear each background singer distinctly. Recent records, with an excess of compression, Winegar calls by one generic name––“Captain Crush.” Earlier producers were able, however, to use little equipment, and yet capture a huge sound which still felt alive. Winegar cites Glyn Johns, who produced The Who, The Rolling Stones, The Kinks, the early Faces and the later Beatles, Led Zeppelin and The Clash. He also mentions, Roy Thomas Baker, responsible for the sound of classic Queen.

This ethos, perfected by the British, Winegar traces back to the great America recording studios of the 60s––Motown, Mussel Shoals, Chess, Stax. “They came to America in search of the secret of each studio.” What they discovered is that the source of these unique sound prints was nothing artificially. Everything depended on the real physical rooms, and the studio’s actual musical instruments––these drums in that corner. Winegar says it’s this that the best producers, from both sides of the Atlantic, have always remembered.

Winegar grew up in San Francisco and revealed a musical aptitude by the age of three. By twelve he was already recording. Over the years Winegar has accumulated a vast knowledge of recording lore. In Hollywood with his band The Spent Poets, Winegar was bewildered by all the pointless hobnobbing he observed. This mania for establishing social connections has gotten worse with the Internet, Winegar say. “Everybody is trolling around, trying to connect with the stars.” We have fun imagining Keith Richards on MySpace, chuckling as he turns down friend requests. “Deny!” Winegar says and laughs. “Nobody in Hollywood seemed interested in the actual music. But when I met someone in the business, I always asked about recording sessions, about the details of studio craft.” This curatorial attitude has paid off, landing Winegar work with the likes of Primus. He recalls introducing them to a crusty songwriter named Tom Waits. Les Claypool liked what he heard and convinced Waits to add vocals to “Tommy The Cat,” and Winegar was there to record it.

What matters most, Winegar says, is trust and planning. “A producer needs to be an honest guide, to communicate clearly what seems best for the band.” And bands need to keep an open mind. Most bands tend towards an excess of emotion and instrumental overkill. It’s Winegar’s job to detect the basic feeling trapped in a song and bring out the nuances. Toward this, Winegar plays the recording studio like veritable musical instrument. The easy accessibility of technology today, allows almost anything––say, a proto-string syntheisizer like a melotron to be faked instantly. It’s a great temptation to include more than is needed, or to tweak a record to death. But a good producer will know when to hold back, and when to let go. One of Winegar’s favorite bands is The Flaming Lips, whose albums are dense with studio-generated effects. But for Winegar their records all show tremendous taste. “Yes, the production is heavy, but it all sounds right,” Winegar says. Great recording begins and ends, for Matt Winegar, with a trained and working ear.