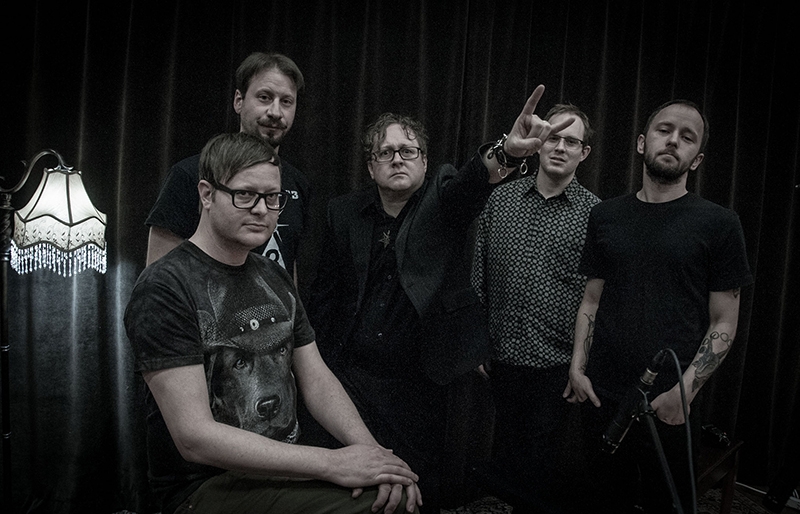 Moths in the Moonlight

The Moths are self-described “rock noir.” It’s a form of dark music that’s not exactly goth, metal or punk, but Morrison’s own idiosyncratic grappling with dark subject matter, very much informed by the band lineup: Morrison on vocals, guitar wiz Mike Sasich (producing the album at his Man Vs. Music studio), Weston Wulle on bass, Greg Midgley on keyboards and Josh Dickson drumming. The disc also features Lindsay Heath and Angie Midgley on vocals, and sax work from Dan Nelson and Stephen Chai. For a five-song EP, it’s a remarkably varied collection, and in a way, also a microcosm of Morrison’s music.

Since the age of 11, 43-year-old Morrison has played music in some of the most notable bands in the local music scene in the late ’80s/early ’90s with pagan folk combo In Gowan Ring and industrial ensemble Ether—both of whom released albums on international labels and toured widely. One of his bands, Red Bennies, he says, were “juiced up, with the aggression of punk and the melodic sense of Stax/Volt.” He worked with Kyrbir from Red Bennies on a number of that singer’s projects, including Puri-Do and Purr Bats, and they are collaborating on a release for later this year. After he left Red Bennies, he formed garage band The Wolfs, with 10 releases through the early/mid-2000s. He was with Vile Blue Shades for their Triple Threat album, and with Pink Lightning and Pretty Worms, who also enticed audiences with energetic rock and issued several albums. It was while touring with Red Bennies on Vaccination Records along with Wesley Willis that the behemoth musical savant “demanded that I start my own record company.” Thus, 8ctopus Records was born, and Necromancy will be the label’s 29th release.

“Death rock has a long-standing tradition,” he says, going back to Jody Reynolds’ “Endless Sleep” (1958), The Stooges’ “Death Trip,” Christian Death and countless other bands fascinated by the subject. The Moths’ 2013 self-titled release addressed sexuality, and this one confronts the final question of life that’s ever-present, always on the periphery. “I have had a fascination with death throughout my life,” Morrison says. “It’s very honest, very cathartic. It definitely comes from a wellspring of experience that’s been really fucking intense. There was a feeling that machinery has been set in motion, gears turning that can never be turned back.” Midgley calls it “an obelisk. We talked about its monumentality, the architectural landscape of it,” he says.

The opener, “I’m Catching Up On You,” is a straight-ahead rocker. “It’s a state of being,” says Morrison, “of total power exchange, the 24/7 lifestyle.” It’s the elusive pursuit of the object of desire, with all the psychological pitfalls that it implies. “Eye” employs a whiplash backbeat as wily as a whirlwind. “It’s about drowning in emotion,” Morrison says, “and at times, I experience a certain amount of emotional hysteria.” “Spellbound” is both incantation and dirge, the closest thing to death metal on the disc. “The magic experience exists for every person, in a unique way, who is able to connect with those energies,” Morrison says. “This is the point you hit when you realize your magic has suddenly, disastrously failed.” “Yelling Sack” fluctuates between two chords, yin and yang, systole and diastole, positive and negative, in which the energies built up during the other songs seek release. It’s like “when you have yelling inside of you that needs to come out—you can put it in there and keep it there,” he says. After this movement to capture the energies brought up by all this, closer “Yours to Kill,” actually offers release, in the seemingly unlikely form of a blues ballad. In the guise of an ode to a lost lover, it has a sense of resignation that’s a relief. Sasich says, “It’s a real curveball at the end, in terms of tracking.”

With cover art by Mattson McFarland, the CD is accompanied by a booklet with lyrics and collages by Xkot Toxsik and Paul Butterfield, who has played bass in numerous local bands. A limited-edition release includes a bonus disc of songs “in dark ambient style,” inside of a “yelling sack.” Local artist Sri Whipple also helped indirectly—he designed and cast enchantments upon special musical instruments, including “death rattles.” The cover art includes occult symbols and animalistic figures, and the inscription “As I can create, so also shall I destroy.”

They felt the danger of staring into the abyss in the process. “It hasn’t come without personal cost,” Morrison says. “This album has been taxing on every level— psychically, psychologically, energetically. There’s been adversity at every step. When you deal with dark matter, the ‘left-hand path,’ you gain access to things otherwise inaccessible. It doesn’t come for free; there is a lot of pain and loss. At times, I felt like I was cutting off my own hands!”

The album-release events include an all-ages show at Diabolical Records on April 24 at 7 p.m., opening for Acid Mothers Temple at Urban Lounge that evening at 9 p.m., and a “Requiem Mass” of the dark, ambient bonus tracks at Albatross Recordings April 25 at 9 p.m.