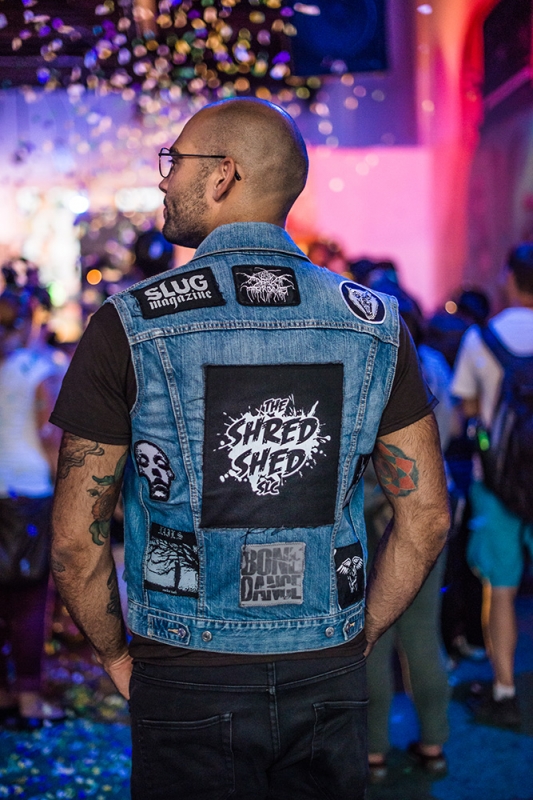 If you hit Downtown Salt Lake City near dusk most nights lately, there’s been a bustle that had been long absent from the city center. On 60 E. Exchange Place, The Shred Shed, an all-ages music venue and art gallery, has ignited flurries of color and culture where local and touring underground bands of all genres have sounded off in a space filled with street murals, graffiti and framed visual art. The Shred Shed has become an epicenter for the local DIY music community, and come Thursday, Oct. 17, co-owner Jesse Cassar will begin to celebrate the first anniversary of what has already become a site of Salt Lake countercultural lore. The crux of the venue’s milestone, however, transcends any notion that it’s “just” a venue: It’s a beacon for the Salt Lake City community. “That’s really my favorite part—being a part of something that’s a lot more powerful than I could ever be as a person,” says Jesse. “That’s the whole point of The Shred Shed. If you want to be a musician, you could have the opportunity to. It’s just this little, grassroots vehicle for people pursuing their dreams.” Jesse achieved his dream on Oct. 19 of 2012. Since then, The Shred Shed has enjoyed killer shows from underground giants like local ’80s hardcore band Insight, melodic rockers Night Verses and rapper Blueprint of Rhymesayers, while continually providing an outlet for local outfits like hip hop artist Atheist, the avant-hardcore Foster Body and the bourgeoning Heartless Breakers. It is second nature for Jesse to dedicate himself to bands and their well-being, and has been since he booked his first show for LOOM, Red Caps and DJ Ryan Moody at Artopia in September 2008. Jesse has since honed his showcasing skills, as he studied sound engineering at Santa Cruz Community College in 2008 and learned the ropes of booking and promoting shows at Santa Cruz’s Blue Lagoon. When LOOM visited Santa Cruz, bandmates Kim Pack and Mike Cundick asked him to roadie for them, and he eventually became their manager. Overseeing LOOM, Jesse rounded out his passion for helping bands.
Jesse moved back to Utah in 2009, and he and Cundick decided that they wanted to live in a perfect band environment. The first DIY Shred Shed began when the two found an affordable home where LOOM (recently coming out of hiatus) could practice and bands could play with the essential amenities: office, living space and a “shop” area. In February of 2010, he and Cundick moved in. More and more bands from around the country called in favors to play the DIY Shred Shed when official venues were unavailable in SLC, and more and more shows transpired there until four shows in one week elicited a police visit. At that point, the cops knew the place was an unauthorized venue and shut it down in September 2011. Jesse says, “It was really hard—it was one of the hardest things I had ever gone through.” It took just three months of frustration before Jesse became motivated again to establish a legitimate all-ages venue. “I truly believed that it was my calling,” he says. “I believed that it was an opportunity for me to do some real good, to make a positive change in Salt Lake City.”
Jesse began going into the City-County building at least once a week in 2012 to gather information on how to open a venue. Several departments gave him the runaround, which led him to Fire Marshal Dennis Barker, the very person who’d shut him down with the police. Jesse stated his case and won over Barker, who coached him on how to get a legitimate Shred Shed running. Jesse learned the ropes around the departments in the building, but after going in habitually, Jesse’s morale had dampened—until his friend, Michael King, stepped in to help. King not only offered advice and “inspirational speeches,” but threw his hat in the ring to become a silent business partner with Jesse, helping raise money and search for a space. “I always thought that it would be amazing to have The Shred Shed in the location where Artopia was. It’s an amazing location—it’s a good space—and there’s a lot of good energy there,” he says. Ironically, Jesse found that the empty space was zoned exactly for what he needed.
It took from February to June for Jesse and King to get the OK from the landlord to lease it to them. The subsequent hoops, however, were 20 times what they expected. A main obstacle was the need to turn one bathroom into two; after burning through money and architects, they found Jesse Beacom (of NONOYESYES), who “kept [drafting blueprints] because he wanted the venue to open,” says Jesse. After about a dozen blueprint submissions, the City finally approved them in September. “The second that things like this started coming together, I started feeling so inspired and overwhelmed with this feeling of empowerment—that Salt Lake City was going to get this venue,” says Jesse.
Jesse maintained his faith and kept his eye on the ball, but he also thanks many sources of support who helped him do so and demonstrate the community’s mutual investment in this endeavor: Tracy Orton, I Am The Ocean drummer Taylor Orton’s dad, built the bathrooms “out of his pocket,” Jesse says. “He did it out of the kindness of his heart … because he believes in the local music scene because his son plays in bands.” Bar Deluxe owner Kaci Tokumoto coached Jesse and loaned him money, and Dreu Hudson provided electrical services. Jesse’s then-girlfriend, Lauren Sharp, stood with him through the thick of it, and roommate Shawn Conway offered unending support, too. Jesse felt a late-game energy boost when friends Josh and Carissa Davenport inspired him to set the realistic goal of opening on Oct. 19, and to start a Kickstarter with a goal of $1,000, which they more than doubled with $2,200. SLC’s community had spoken, and the prize of Gaza’s album-release show with Eons, Fever Dreams and Cornered By Zombies was imminent in just over a month after approved building plans. Oct. 18, Jesse hit the City-County Building and received his business license, but before he could shred a joyful tear, he was unexpectedly directed to get his certificate of occupancy, a process that would take seven to 10 days. After pleading with the receptionist to no avail, he quickly stumbled upon the help of a business licensing supervisor in the building—a woman he didn’t even know—who argued with the receptionist on Jesse’s behalf and called over the receptionist’s supervisor. “I’m closing my eyes … Before I know it, I hear this guy say, ‘Shred Shed?’ and I open my eyes, and it’s this older guy … definitely a supervisor’s supervisor,” says Jesse. “He pulls me out in the hall and he says, ‘I’m going to go ahead and give you your certificate of occupancy right now’ … He held his hand out to shake my hand, and I blew right past it and gave him a hug.” With a wink from the business-licensing supervisor, the relationship he built with the city was affirmed. Opening day, Jesse’s mom, Sheri Jepperson, christened The Shred Shed with sage while his dad, Ken Cassar, looked on in support. One fire-marshal friend, Daren Mortensen, spontaneously came by with a police escort to congratulate Jesse for kicking off the show and to say, “You did it!” to which Jesse replied, “We did it.” The over-capacity opening show went off without a hitch, of course.
Nowadays, The Shred Shed regularly throws impressive underground shows within its doors—Jesse is stoked for Real Friends on Oct. 12, The Chariot on Oct. 30, He Is Legend on Halloween and Scale The Summit on Nov. 11. With a steady flow of artists to boot, he has grown his sound system to three monitors, JBL subwoofers and power amps that have double the output compared to when they opened. Additionally, he and King keep the venue running with their invaluable volunteer staff: Chris Farnworth (booking and graphic design), Andrew Scheier (booking and talent recruiter), Meggan Fenton (head of street team and promotion manager), Ken Vallejos (volunteer organizer), Scott Schilling (main sound engineer), and Jeffrey Carbine, who updates their 24tix account. Until recently, Patrick Mower had deftly handled web-related Shred Shed tasks. “They’ve saved my life—I fucking love those guys so much,” Jesse says.
At this point, The Shred Shed only has room to blossom. Although known for booking heavy acts, the space is open to any sort of act, as long as they are serious about their art. Jesse says, “We are really not picky because music is this type of art [where] … there genuinely is some type of music for everybody.” The Shred Shed has upped its booking of hip hop acts and began a free, monthly open-mic last month. “We wanna hear your poetry,” says Jesse. “We wanna hear your acoustic songs—we wanna hear your hip hop or your flows.”
Another crucial component of the all-ages venue is, undoubtedly, the youth. Jesse says, “I would like to believe that, going to The Shred Shed, ideally, if you’re a bit younger, will give you a little bit more culture than I was able to have.” Jesse believes that it is the elder generations’ responsibility to expose the youth to “true, organic, real art and culture”—lest they be subsumed by stadium-concert kitsch—to impel progress in our society. Jesse is excited to be involved in the upcoming 801 Sessions, in partnership with Spy Hop and SLUG, every third Wednesday of the month, starting December 2013: “Spy Hop is going to help Salt Lake’s youth plan and organize and perform shows—so they’re gonna come and do everything. The fact that I’m doing that with Spy Hop is a dream come true,” Jesse says.
In celebration of this ongoing dream, The Shred Shed will hold an anniversary show each day from Oct. 17–19: Baby Ghosts, Moneypenny, The Sinisters, The Wasatch Fault and San Francisco’s Posole on Thursday; Die Off, Filth Lords, Jetty and Subrosa on Friday for Subrosa’s all-ages album-release show; and Musclehawk, Atheist, Dusk One, Giraffula and Dine Krew on Saturday. The splendor won’t end there, though—“[In two years,] I see The Shred Shed [moving from] one sold-out show a month to having five to 10 sold-out shows a month,” says Jesse. “I see The Shred Shed getting better acts, constantly having a more professional appearance and having more opportunity to give back to the community.”
Say thanks next time you see Jesse. Through the power of intent, he has bestowed this city with a long-overdue outlet for creativity. Also, consider giving back: “We always could use more volunteers,” says Jesse. Email ken@theshredshedslc.com to volunteer, and go to theshredshedslc.com for more details about the venue.