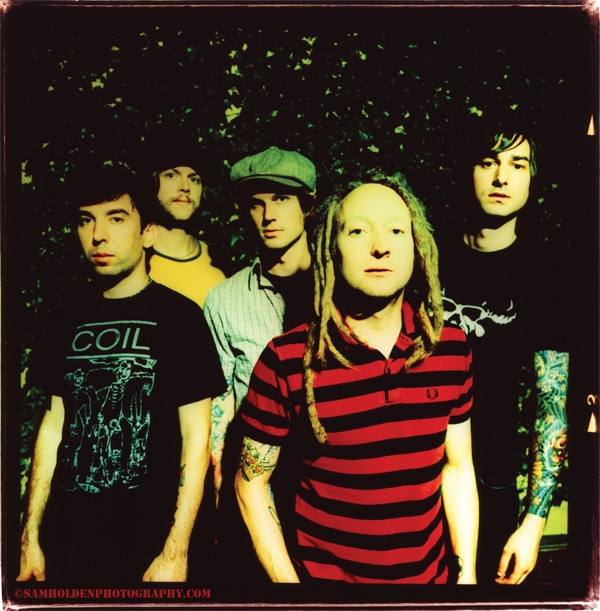 There is an innate assumption that punk rock is nothing more than a phase in most people’s lives. If you’re still rocking a Subhumans back patch or maintaining a NOFX vinyl collection past the age of 21, people will think you’re weird–and not even the good kind of punk rock weird. Even though most punk rock stalwarts, your Rancids, Pennywises and Bad Religions, were started with the intention of representing the combination of youthful exuberance and the mistrust of authority that is so crucial to punk rock, the intention seems to be lost when they’re balding, cranking out by-the-numbers “comeback” albums and selling bobbleheads of their own likenesses at their Warped Tour merch tents. Strike Anywhere is different. Ten years after their formation, they’ve kept their energy, anger and, most importantly, their integrity. I spoke with Strike Anywhere frontman Thomas Barnett just before the band embarked on their European tour in early December to discuss aging and evolving in the ever-changing, but ever-stagnant world of punk rock.

“Punk isn’t necessarily the angry teenage music anymore. It used to be the only choice, but now there are so many other genres out there,” Barnett said. It’s a given that the Internet has changed the way we all live, but it has also changed the way that we experience and interpret art. Because it is so easy for any and all music to be heard by any and all people with an Internet connection, punk rock is losing some of its underground appeal as Pitchfork-endorsed, Carpenters wannabe bands become a collective rallying point for aficionados of underground culture. “[Punk rock] is becoming more and more of an exotic thing–it’s becoming a harder thing to explain it to people,” Barnett said. “This is a counterculture where the audience is more important than the band. Everyone is a peer, we’re all doing it together and the music shifts and changes with the people who are there interpreting it.” Try to get that at a Vampire Weekend show, you v-neck wearing trend-hoppers! “It does its job of spitting in the face of everyone getting so lapsed into their structures of what they consume and what they think and who they think they are. People are attached to this music and this movement because it speaks to them about the power that the rest of the world tells them that they don’t have,” Barnett said. “That’s what has kept us coming back for ten years.”

Since the beginning, Strike Anywhere has been fiercely political, but not by design. “We haven’t been conceptual about our existence at all–we’re in a band because we need the catharsis and the personal realities of writing these songs. Committing them to the world is sort of like public vulnerability,” Barnett said.  Even though the band’s songs, which tackle such issues as women’s rights, gay rights, globalization and police brutality, have become rallying cries for many, Barnett was quick to admit that they are not trying to speak for anyone but themselves.  “Our stuff is definitely political, but we’re still just five friends making music, and in some ways, we want to make it a party,” Barnett said. “We never wanted to be the band that thinks they have all the answers. We know that we don’t know everything about what we need to know.”

Strike Anywhere’s new album, Iron Front, which was released last October, is just as aggressive as the band’s earliest work. “Having a new record and new songs, it re-invigorates the band–you’re reborn with every record,” Barnett said. The band has played over 200 shows over the last three years in all corners of the globe, and their time spent performing in a live setting can definitely be heard on Iron Front. “We’re always building on music. It’s not like we’re going, ‘Time for a new record! Oh shit! We need to write and record more songs!’ it’s more of a continuum, like writing in a journal everyday. There’s a rhythmic discipline.” This energy has manifested itself in some unique ways on Iron Front, as Strike Anywhere expands their melodic-hardcore sound by aptly incorporating both more melodic and hardcore influences. “There’s more breakdowns and dance parts and some darker melodies, but there are also just more melodies,” Barnett said.

To begin 2010, Strike Anywhere are embarking on a winter tour as support for synth-pop-punk-core headliners Four Year Strong. “I think on some level if you only play with like-minded bands that are your friends and that you’ve been playing with for twenty years, it’s a lot of fun, but you’re not engaging folks who are maybe just coming to shows for the first time,” Barnett said. “We don’t have a lot of epic pretentions about what we do. Just becasue we sing about issues and have political stances and have been part of a more activist-minded punk community for ten years, we don’t want it to become an exclusive thing. That makes everything esoteric, rarified and academic, and those are not punk words. It’s good to open that shit up and make it relatable without diluting it.”

Strike Anywhere will be performing at Kilby Court on February 2 with Four Year Strong, This Time Next Year and Title Fight.