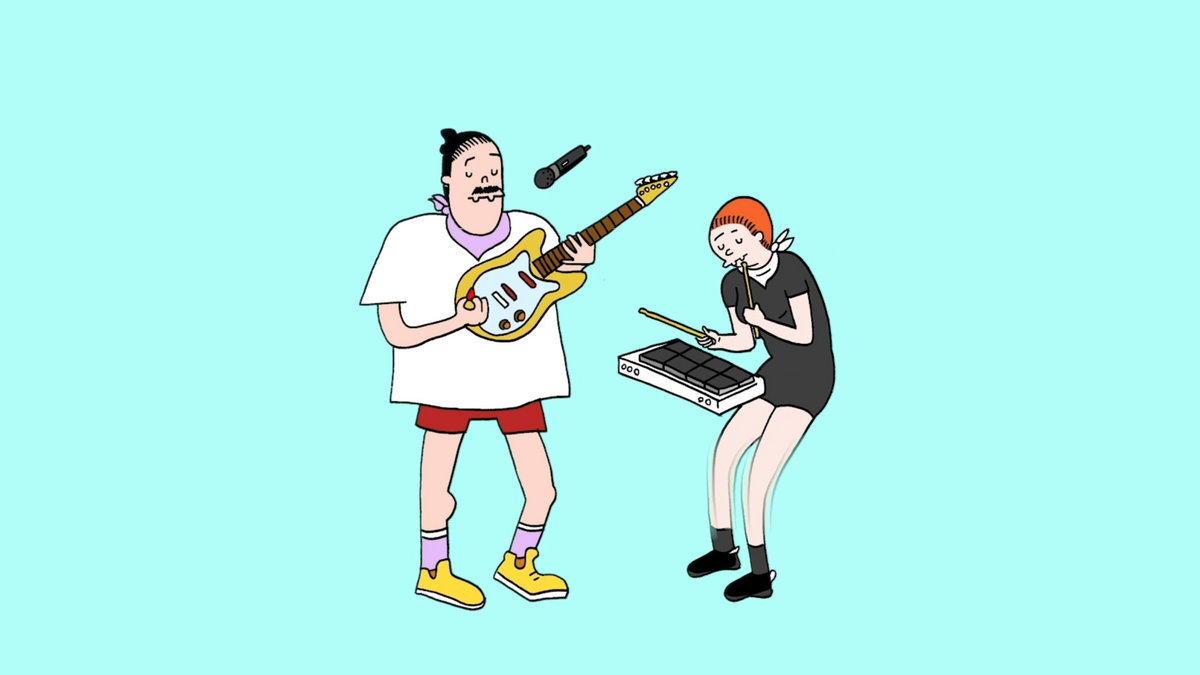 The Waking Life of Tunage and Lineage: An Interview with Breakfast Tacos

“Coming from Austin, I missed how they were everywhere. I make them at home all the time. Usually, potatoes and eggs, or papas con huevos. Hence, the album name Papás de Rock, which is a play on papas con huevos. The literal translation is ‘Dads of Rock,’” says Bradley Oliver Wilkinson-Vega of breakfast tacos says of the reasoning behind his and Lynae Cook’s band name. Wilkinson-Vega (vocals, keyboard, guitar) and Cook (drums, backup vocals) have been long-time friends, and their new album, Papás de Rock, is an avant-garde, unbounded indie pop record that has traits of both surrealism and homage-heavy roots, with the main inspiration coming from Wilkinson-Vega’s family—specifically, his daughter and partner.

Wilkinson-Vega grew up in Texas, but when his younger brother passed away in 2011, he decided to begin a new chapter in Seattle. “Long story short, I wasn’t in a good place, and thought moving out of state would solve my problems. It took years before I started going to therapy and found other forms of self-help like meditation, gardening and yoga,” Wilkinson-Vega says. Not only is he a musician, but Wilkinson-Vega is also a composer, director, animator and illustrator. Ultimately, fatherhood is his favorite role and where he derives most of his inspiration. “Nowadays, I’m a stay-at-home dad and make my animations and music from home. If anything, I feel like I get more done now more than ever because I’m not wasting my time partying like that empty person I felt I was,” he says.

Prior to breakfast tacos, Wilkinson-Vega and Cook had other collaborations together as well as “Pabst Nights,” where they drank and drew on a monthly basis until they finally began the making of Papás de Rock, which has plans to be released in early August. “This is my first time singing EVER,” says Cook. “I’d never even sang ‘Happy Birthday’ out loud until just before we recorded the vocals for this record.” Moreover, the creative process is both flexible and structured, “a fun personal puzzle you get to figure out, and the best thing about it is the fact that there’s no rules,” says Wilkinson-Vega. “You make the rules. You also get to decide if it sounds like shit or not. It’s a fun game.” Wilkinson-Vega wrote the majority of the album, except for “Los Maderos de San Juan,” a regional folk song about the woodsmen of San Juan. When the two aren’t jamming together in Seattle, Cook is a photographer and Wilkinson-Vega has his own animation studio called Nacho Oliver Animation.

A major theme throughout the LP is the duo’s sense of place in this world, and the stories they tell themselves. Each song feels culturally driven, whether it’s from the intimate lyrics in “baby tallu” or Latin-infused spirit of “camiseta grande (big t-shirt).” “Bradley and I grew up in worlds that aren’t monoliths. We, in and of ourselves, aren’t monolithic,” Cook says. “So, our combination of growing up in parts of the country that indeed were Mexico with a mixed heritage and around a diverse group of kids in an era that was at the cusp of dissolving genres—all of this is reflected in our music.” Likewise, Wilkinson-Vega further explains that being biracial is part of his identity, coming with the conflict of his Mexican and white ego. “This has always been an internal struggle—bringing to question identity, politics, and culture. With all this initially stewing, it brought [about] my fascination with sub-cultures at a very young age. Being biracial, I felt music and art gave me a sense of belonging. Cliche, but I didn’t need to be white or Mexican. For the first time, I could jump into a comic book, video game, music video, film, etc. I think that’s why we all love this kind of stuff.”

“You make the rules. You also get to decide if it sounds like shit or not. It’s a fun game.”

To question one’s identity is, of course, a universal theme. But breakfast tacos seek to question, as well as discover the immersion of homeland through sound, and what that can possibly entail in regards to their music. Their style is a combustion of electronic rock meets dream pop, a similar flair to other artists such as Sweet Valley, Black Moth Super Rainbow and Jerry Paper. And yet, there’s so much more to breakfast tacos. You feel in every track that they’re begging to question the concept of “genre.” Why stick to a singular, typical genre? There’s no specific genre here, considering the fact that there never has to be for anything nor anyone. Surely, breakfast tacos encompass that notion. It’s almost as if you’re part of a simulation that’s entirely reliable and true in their tune. Wilkinson-Vega says he wanted to have a sound of “’80s nostalgia … To have a gritty, yet polished mix to everything.”

Likewise, without a doubt, Wilkinson-Vega and Cook are completely aware that nothing can purely be created based on one single idea and/or person. Rather, they crave surroundings and personal recollections as the ultimate influence, which then establishes the thin line between authenticity and imagination. Cook says, “There’s a Timothy Morton quote I love: ‘What is original does not come from absolute blank nothing (‘oblivion’), but from an electromagnetic tenderness—from remembering, not forgetting.’ I’m obsessed with this because it’s a beautiful way of explaining that everything we create is a culmination of everything that we’ve experienced.”

For sure, their music also embodies the tenets of surrealism—as previously mentioned—some type of simulation or a retro video game. Particularly, in the track “dream 84,” where Wilkinson-Vega recalls a dream about camping by the lake with his partner: “It was a dream that stuck with me, one of those you have to write down immediately,” he says. “Slow-motion crumbling buildings, flying with my brother, radiating bowl-haircuts! It’s all part of the inspiration that created the words to this surreal spoken-song.” Not only is breakfast tacos’ sound ethereal and illusory, but the animations and visuals, too. “The power of the imagination is something that shows up in our personal conversations and also in the work, and Bradley has really given me space to feel comfortable getting reacquainted with that side of myself,” Cook says.

So, what’s next for this perceptive and talented duo? What do they hope, if anything, people gain from listening? “During pandemic times? Fun. I hope people can have a moment of escape. Outside of pandemania? Still fun,” Cook says. Wilkinson-Vega agrees, and ultimately views breakfast tacos as something more than a band: “I want to see breakfast tacos grow, whether [into] a fully animated live show or a cartoon series. I see the band as this organic being that will unfold with each creative endeavor we take on next. I definitely want to have more of an edge with the next album coming out. Maybe, more of a discourse of what’s been happening around us—living in the post-truth era. But, we’ll see.”

I highly recommend listening to a few of breakfast tacos’ singles through their Bandcamp. You can also follow their Instagram account, @breakfast.tacos, to find out more about their upcoming album!