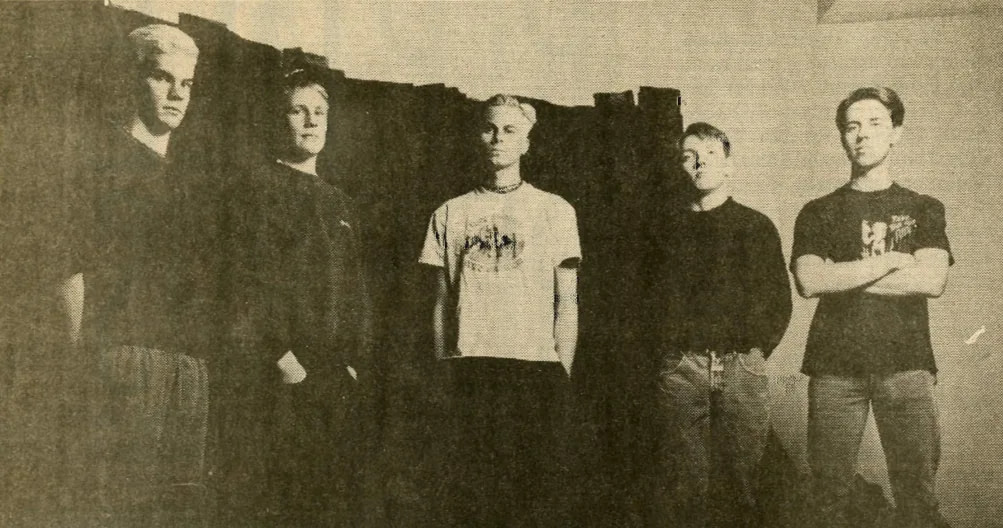 Sometimes I am really glad that I missed out on certain things. One of these things is developing a bad attitude about straight-edge music before I had a chance to see Insight play. The first time I saw them play, I had no preconceived notions about their ideas or beliefs. By the way, for those of you who don’t know what straight-edge is, I will explain it the way I understand it so we can get it out of the way. The straight-edge movement comes in many forms, but the basic force that drives it is the desire for certain individuals to live in control of themselves.

The main focus of the movement is abstaining from drugs and alcohol but could also include: eating meat, having casual sex and any other vice the individual chooses to stay away from. The movement is strong and gives the kids unity. Many big name bands such as Youth of Today or Insight are more vocal about these views than such bands as Seven Seconds or Uniform Choice. There are no set rules. The individuals who choose this way of life choose their own standards and live them the way they feel best. Insight was the first band to join the straight-edge movement in Salt Lake City.

Choosing to be a straight-edge band has been both to their advantage and their disadvantage. The disadvantage I have seen is that they are labeled as such. Many people are put off by the fact that they are an edge band. The band takes criticism: self-righteousness, naivety and even trendiness. Two years of rock solid music and attitude shows that they aren’t trendy, and they honestly don’t care if people like what they stand for. They believe in what they are doing, and they aren’t going to let peer pressure stop them. The advantage is that they started the band with a purpose in mind, and over the years they have built a solid foundation that will pull them through all kinds of obstacles.

My first and last impression of the band came about a year and a half ago when they tore The Word up in front of about 150 frantic kids. The band is very young, ages 17-21, but they function very professionally as musicians. Youth is definitely in their corner. Musically they are far ahead of many of the musicians their ages. This youth gives them energy and vigor.

Being drug-free is certainly not the only thing these boys are shouting about. They feel just as strong about animal rights, unity, stopping racism, love, friendship and relationships. These ideals are evident in their music both on stage and in the studio. The amount of emotion projected in their live performance is a direct reflection of the emotion they put into writing their music. This belief in what they are doing gives the band a reality that is evident in their live performance and their lifestyles. 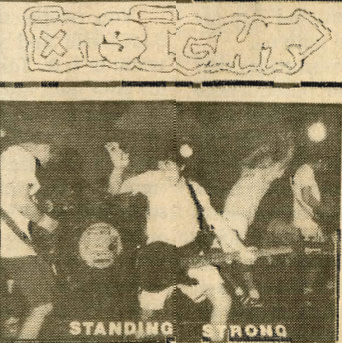 Mark (vocals), the old man of the band, stands outright as the mediator of the band’s energy. His voice is hard, angry and very powerful, and he has no trouble taking control of a crowd when he picks up the microphone. Since Mark does all the singing, he carries the burden of being the spokesperson for the band. He performs with a high level of energy, so ignoring what he has to say is difficult. For this reason, he is very careful not to preach and whine or make political statements he doesn’t have a rock solid view on. He does not, however, hesitate to say what he feels. I was happy to hear him announce to one of their crowds that they wanted people to watch them play as a hard-core band and not just a straight-edge band. The band is good and people need to listen to them play.

The wall of distortion is provided by the guitar-jam duo, Jeremy and Jamie. Both play very well. They combine speed, intricate chord changes and a very crunchy grind that gives Insight’s music a great diversity. You won’t just hear balls to the wall thrash—the songs are well written. Don’t get me wrong, the music moves well. Chubba (drums) is the pace setter. The pace he sets is fast and smooth. The thing I like best about watching the band play is seeing Doug play bass. He is one of the most intense musicians I have ever seen play. His style is good and his technique is even better.

The band carries a great presence around with them, both on and off stage. They are all playing in the band for the same reason, and they are all really good friends. Inner-band tension will probably not be this band’s downfall. When they play live, they enjoy it, and the crowd can sense it. This intensity keeps the crowd alive and coming back for more. At times, it can get quite exhausting just watching these guys play. They are very serious as a band, but they never lose touch of the fact that they are also out to have a good time.

It took almost nine months from the time they were signed by SoulForce Records to actually see their names on vinyl. The success they have received has certainly not come easy. They have had the same obstacles that any other band has had. The tour they went on last year was fairly successful but turned out to be more of a learning experience than a good time. The band’s van broke down halfway out, and crowd response isn’t always what it’s cracked up to be, especially out of town. Response in town isn’t always that great either. I remember seeing them play with Cro-mags last year. They played the right style of music but the crowd crucified them.

Insight would like to get signed eventually to a larger record company for reasons of distribution and money. This, however, will not be a goal that will keep them from pressing forward. They are taking a three-month break right now to write music which they will take on tour this summer. Check them out some time—the music is good.