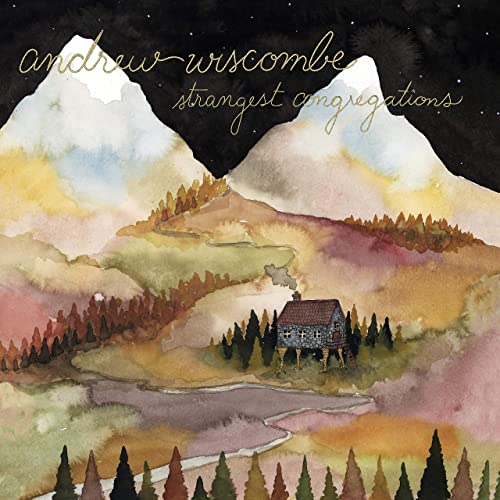 I had never heard of singer/songwriter Andrew Wiscombe prior to his latest release, Strangest Congregations, so I really wasn’t sure what to expect. I thought maybe there would be a track or two that would stand out, maybe some things that needed polishing. However, after listening to the first two tracks, I realized I was listening to something much deeper, much tighter and better-considered than most of the new music I have listened to lately. The rest of the album simply fortified that conclusion.

First, I have to say, I am not a huge country music buff. I like sad old ballads that remind me of my grandpa. I dig Merle and country puritans of that ilk, but it isn’t a genre I follow readily. I am generally exposed to someone new through a moving scene in a movie or television show. So, I consider myself lucky that I was given this album to check out.

I have to say, the album feels entirely real and first hand. This album is for the everyman, the blue-collar working class, the down-on-your-luck-but-hammering-through-it perseverant conglomerate of middle America. If you can’t see yourself or someone you know living their lives in these songs, then you aren’t paying attention. Wiscombe covers loss, economic hardship, generational dream deflation, broken heartedness, prejudice and many other things that have molded and shaped human beings into the complex, resilient creatures we are.

“Indiana,” the second track on the album, is a gem—deftly laid out and expertly played. The guitar is brilliantly soothing, and Wiscombe’s unique voice is a beacon of resonance. I played this song over and over again. Another song that led to repeated listens is “Share the Silverscreen.” The perfectly plucked melody on his guitar beckoned me to hum along. Had he been in front of me, I’d have followed the tune anywhere as though he were the piper come to take me away.

I am usually drawn to slower, melancholic offerings, of which Strangest Congregations has many, but there are some bangers and bops here as well. The lead single, “Ain’t It A Sideshow,” is a knee-slapping good time with a faster pace and a rock-eaning undertone. “Workin’ Man’s Mile” is also lighter in fare, on the surface anyway. The harmonica’s melodies set it apart from other tracks, and subtle percussion top it off as one to learn the lyrics to.

Strangest Congregations is excellent from top to bottom. The production value is second to none; his guitar play is superb, and his songwriting ability is even better. If I could just find this kind of country all the time, I may start paying closer attention. I doubt it, though—this is a class all its own. –Billy Swartzfager