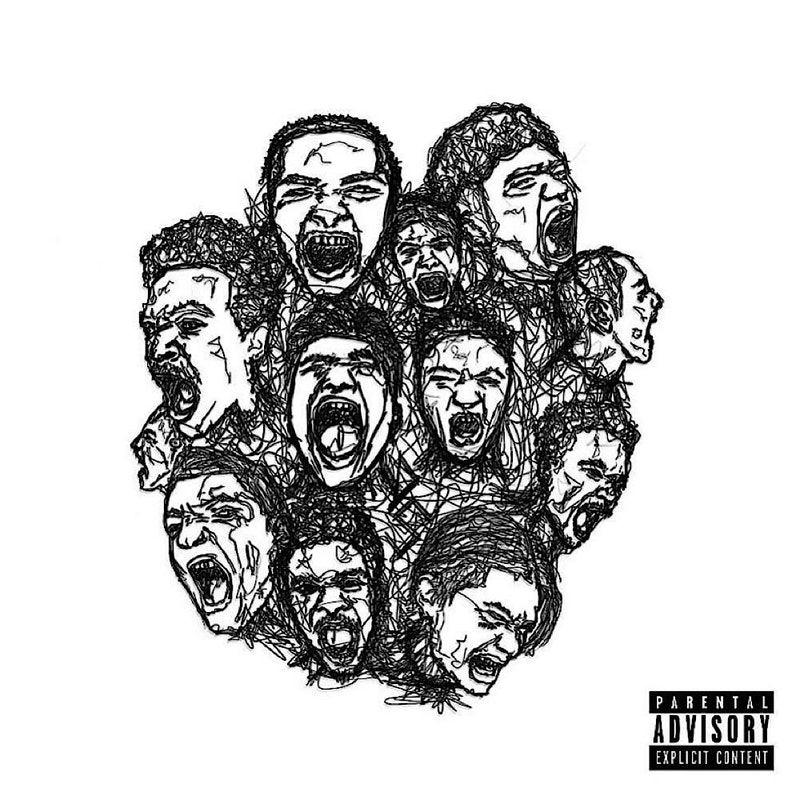 Dogma World, Vol. 1 announces itself with “Bottom Of The Pit,” a more classic hip-hop/rap track with a hardcore edge. The foundation is a trap-like percussion with dissonant synths that give the track an uncomfortable feeling. It’s a welcome discomfort, because it heightens the way the force of the vocals cranks up the energy to 11. These vocals from Lord Sinek, ItsNubes, K8OH and Mmmernie flow between smooth rhythms to hard-hitting growls, with the flow allowing for the aggression to have an almost calming wave to it as sounds come and go.

“Bottom Of The Pit,” launches straight into “Home/Doesn’t Feel Right,” which is where DOGMA SOCIETY introduce their indie flare. This track has that California dreamscape feeling of summertime indie hits. Here, DOGMA ditch the heavy synths for a traditional drum kit/guitar combo. The track leads you in with a hi-hat/snare rhythm that I could listen to for days on repeat. It’s so simple yet has a finesse and sophistication that can’t be beat. Those drums are quickly joined by a guitar absolutely dripping in chorus effect tones that will make you feel like you’re melting within its smoothness. DOGMA’s indie side blends with their rap side most heavily in the vocals, where the riffs flow from melodic singing to speedy rapping. This mixture almost gives me a No Doubt vibe in its flow. The track has an undeniable ’90s West Coast alternative groove that elevates the indie flavor. The vocal flow finds a pocket then hops to another and another, all while sitting deep in that same groove.

There is one particular technique DOGMA utilize that gives them a unique edge: their use of genre conventions. There are a lot of familiar and standard sounds within hip-hop—the hype man, the voicemail interlude, sampling, etc. DOGMA take these conventional sounds and add a signature touch. For instance, “IMPERIUM” has hype yells that are closer to post-hardcore screams, and the album’s voicemail interlude—named “Interlude,” of course—is set to a guitar riff reminiscent of Blink-182. DOGMA mixes and matches familiar and comfortable sounds into pairings we typically don’t hear. This creates a wonderful nostalgia that is both familiar and strange.

From the sound of it, you’d never guess that Dogma World, Vol. 1 is their first. DOGMA SOCIETY has crashed into the scene with a sophistication and confidence that makes it seem as if they’ve been doing it for decades. I would keep your eyes out for this group because it’s looking like a Dogma world after all. –Marina McTee