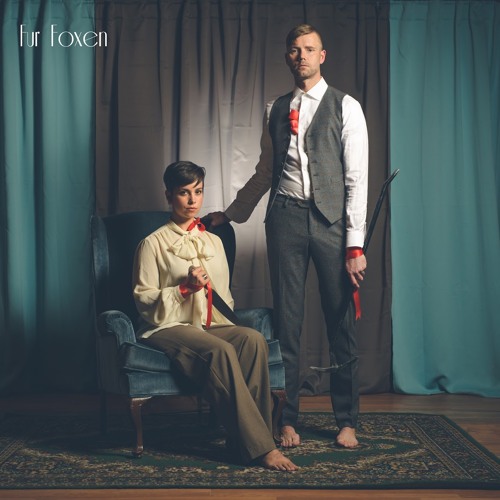 On Fur Foxen’s self-titled sophomore album, Salt Lake City locals Stephan Darland and Amber Pearson continue to infuse classic folk with a chamber-pop flair. The duo weaves a tapestry of intrigue through lively harmonies and pared-down instruments, with Darland’s intimate vocals and Pearson’s urgent cello ushering each track into poignancy. While there’s a playful woodland creature here, there’s also an enchanted darkness, and this combination of lighthearted and eerie is exactly what gives Fur Foxen their sonic edge.

A handful of the album’s song titles perfectly explain the soundscapes encapsulated inside them. “Whisky Waltz” contains within it a hopeful, drunken swaying. The outro of “Nighttime Sweats” uses ominous harmonies and frantic drums, instrumentals that could adequately soundtrack the desperation and confusion of waking from a dream. It’s apparent through the plucky guitars and relaxed, out-of-sync harmonies on each rollicking track that Fur Foxen isn’t afraid to get dirty and take a carefree approach to songwriting. This looseness results in the perception of every track as organic and intimate, as if recorded live—the album was recorded at The Fox Hole after all, a local studio/venue that’s just as cozy as it sounds. But at times, these disjunct rhythms come off as distracting. Fur Foxen’s sound is already differentiated enough from their peers that a more classic, tight-knit playing style would only improve the impact of each song.

Darland and Pearson have been playing music together for over 15 years, which is apparent in their creativity and musical chemistry: From the charismatic “Daniel” to the toe-tapping “Two. The Sea” and the addictively jovial “Shufflin,” each song flows into the next like a stream burbling through the woods in complete surety of its destination. The duo grasps the concept of their chamber folk sound firmly and executes it well on every single one of the album’s eight tracks. This is a crowd-pleasing album by a band that knows itself, and one that seems to have a hell of a lot of fun, too. –Mekenna Malan