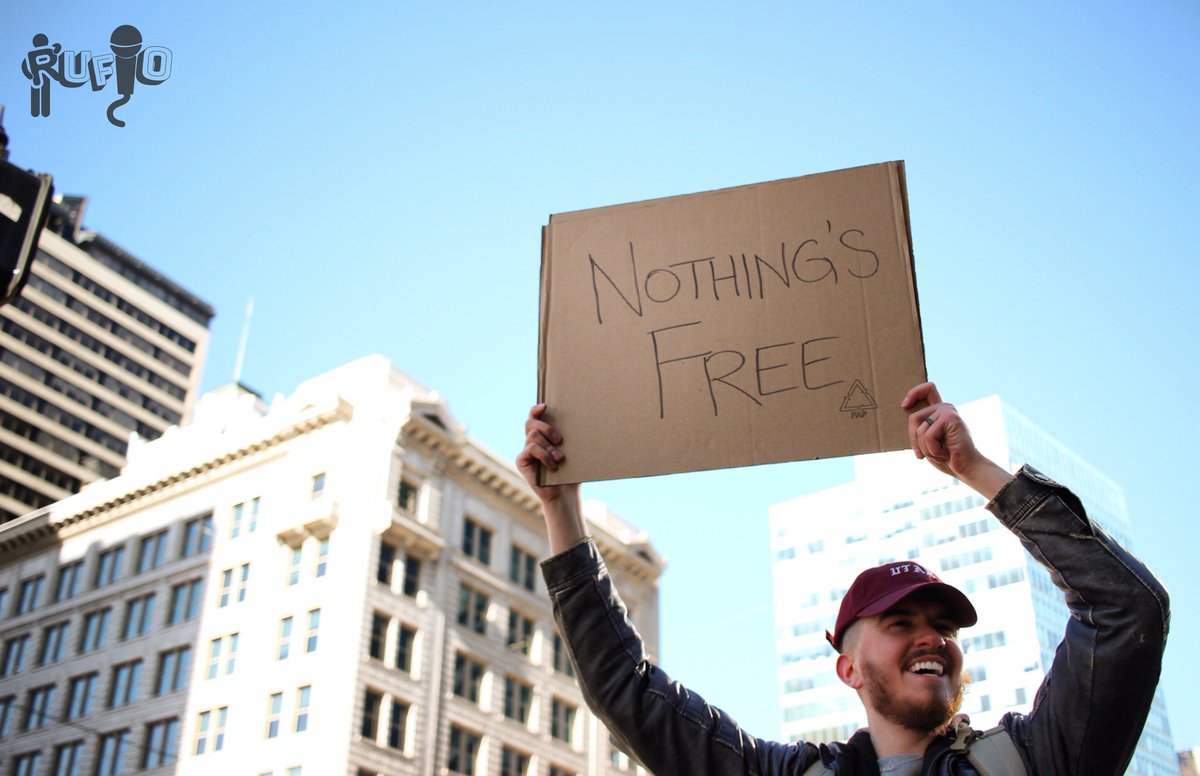 Homegrown in the Beehive State, Rufio is back with his second album, Nothing’s Free, which continues to pair feel-good, kickback beats and thought-provoking lyrics. Nothing’s Free touches on a lot of themes around working towards passions through any means necessary. Tracks with lyrics such as, “Two jobs and a rapper not what the in-laws expect,” (“My Next Check”) and, “I rap like it’s the only way to pay the rent,” (“Hungr&Impatient”) speak toward Rufio’s work ethic and ability to grind towards rapping.

“Hungry&Impatient” opens up the album with a heavily distorted, guitar-led beat that breaks into a piano-heavy chorus. Much as the name implies, the track talks to Rufio’s frustration of knowing his ability but not getting the respect he deserves, while also grinding in hopes of the success he may get in the future. The line, “When I eat we all eat /  But even then / I’ll still be saying ‘I’m hungry’,” speaks to this pursuit for rap greatness.

Following this track is “My Next Check,” a track that talks about stretching dollars while still following what you want to do in life. This track amps up the energy in the album with trumpet and guitar riffs, as well as sirens wailing faintly in the distance. “Hospitality” rounds out the first half of the album with a narrative that centers around finding home in another person. Lines like, “Warm embrace in this world that’s a rarity / Cause it’s a cold one,” pair with a looped piano line and light percussion beat, giving off a warm and mellow vibe.

The title track on the album is story-driven in its lyrics, with Rufio looking into his future but being told it won’t come easy and, as the name suggests, “Nothing’s Free.” This track’s beat has a piano riff looped that creates a stressful atmosphere around the story being told. The following track, “E.O.D. (End of Day),” has an uplifting vibe with its springing piano loop and 808 percussion. The theme of this track is believing in yourself and trusting in “G.O.D.” (God).

The final track on the album finds Rufio coming back to a track he released last year called “Rise+Grind.” This revisit definitely benefits the track, as it polishes up on the trumpet-led beat, giving it a bit more structure and cleaning up the general flow of the track. It’s a great move to end on a reworked and improved version of a previously released track, as this demonstrates the work Rufio raps about putting in throughout the entire album.

Nothing’s Free is the best of both worlds, pairing meaningful lyrics to fun beats and providing an album that gives substance to the type of music you would hear at a summer party. This album would be great for anyone who needs some thoughtful, good-vibes rap or is a fan of early 2010s college rap. –Connor Brady