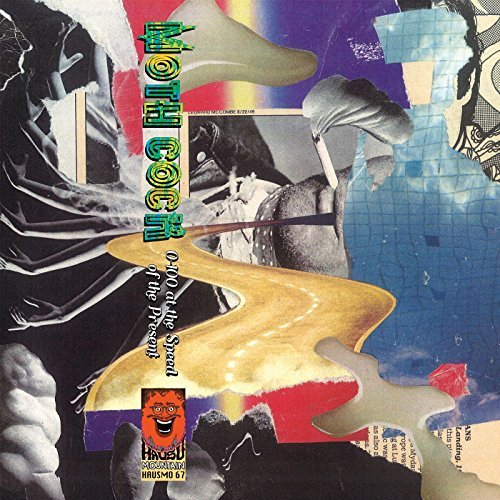 The orange face on the cover of every Hausu Mountain release serves as both a subtle warning and a firm promise. Hausu music is always strange and often abrasive, but it’s also some of the highest-quality material to come out of left-field electronica. Such descriptions apply to Ohio-based duo Moth Cock and their new record, 0-100 at the Speed of the Present. Doug Gent (reeds) and Pat Modugno (electronics) have created a fantastic blend of colorful noise and free-improvisation, resulting in one of this year’s most confounding yet enjoyable records.

A lot of the album seems like Moth Cock is trying to one-up the listener by constantly pulling musical tricks to keep the music unpredictable. On “A Gust That Night Never Ended,” a steady drum loop cuts in and out, often leaving the duo in segments of arrhythmic drone. Still, the drums always return into the noise and confirm that the duo maintains their composure even through the most random-sounding sections.

This characteristic defines much of 0-100 and is one of the duo’s greatest strengths. On first listen, the album sounds like the product of one session where Gent and Modugno let their ideas run rampant and unrestrained. However, each subsequent listen reveals 0-100’s dense structures and clever writing. This is true of both individual tracks and the album as a whole, where each small part adds toward a bigger concept. Longer tracks like “Let Us Share a Coke” never settle in one place for long, but there are deep connections between each section. The opening drones give way into a drum beat that slowly builds upon itself, constantly complicating the sense of meter. Letting moments of confusion linger is one of Moth Cock’s favorite tricks, but one that they always execute well.

“Let Us Share A Coke” continues to swell, adding in beeping synths and heavy distortions while Gent switches up the style of his saxophone playing. Even though the same lumbering drum track plays throughout, there’s a clear distinction between the slower, more expansive playing of the front half and the more sparse, pointillistic shrieks in the middle. Moth Cock build their tracks out of small amounts of material but always manage to morph and twist each idea into something unexpected.

These tracks are also sequenced expertly with Moth Cock’s catastrophic, post-civilized universe coming closer into focus as the album goes on. The dissonant accordion melody of the opener seems worlds away from the rapid hand percussion loops that follow on “Catastrophic Currency,” but Moth Cock use their arsenal of synth tones to connect these ideas. The ending of the title track (one of the noisiest sections on 0-100) falls always softly, and the opening kick drum of “The Flesh Shall Never Enter” doesn’t so much relieve the tension as heighten it. Moth Cock hold this tension for the whole track, letting it swell toward huge electronic noise that never resolves. Each of these sounds originate in some place or time, but Moth Cock reappropriate them to fit 0-100’s disassembling purpose.

This idea is as old as electronic music itself. Early musique concrète pieces placed far-reaching sounds in conflict with each other, and the best of these (Stockhausen’s Telemusik is one of my personal favorites) use this conflict to create meaning or reinterpret culture in an increasingly globalized setting. Moth Cock take these ideas and carry them further, using their music to bring all these styles into the absurd, chaotic present. –Audrey Lockie