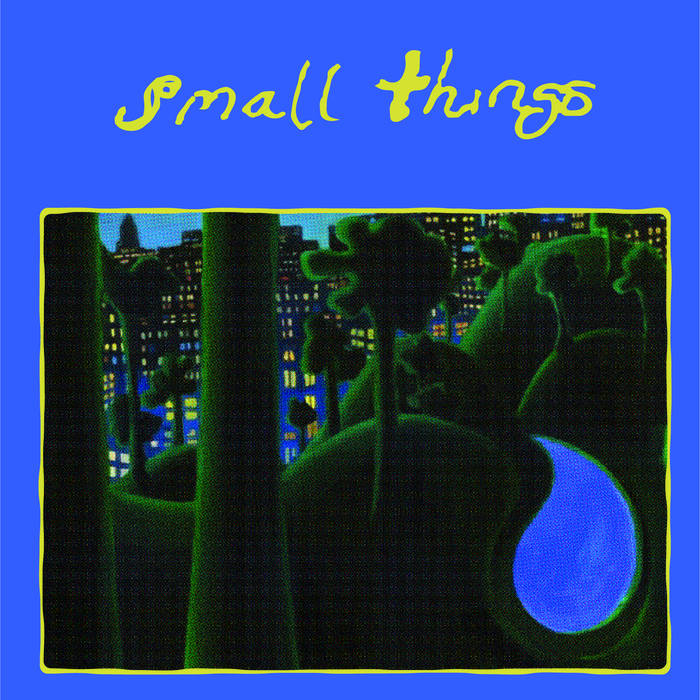 Neo-soul music artist Nick Hakim and multi-reedist Roy Nathanson channel a blend of both terrestrial and cosmic inspirations on Small Things, their first collaborative album. The partnership is unexpected, aside from the fact that the artists met through—and have both performed with—the elusive New York City-based jazz ensemble Onyx Collective in the past. Small Things is the first album to be released on Onyx Collective’s new record label NYXO, and promisingly so.

Eclectic and romantic, Small Things is reminiscent of Hakim’s debut, Green Twins (2017), and is a passionate tribute to Nathanson’s instrument. “She was speaking to the saxophone / In an intimate way / All because she recognized that the saxophone / Is a kindred spirit,” Hakim sings on the title track, carefully, as if waking someone from a deep sleep. Lo-fi vocals and staccato woodwind give way to a mellow drum beat and the result is transportive. Listening, I imagine myself somewhere far from my couch: a bustling city on a chilly, humid night, ice clinking against glasses, soft light and smooth velvet.

The seven tracks of Small Things blossomed from the seeds of Nathanson’s already-written poems, so each pensive lyric acts as poetry first and song material second. On “Things to Like and Not Like in America,” Hakim finally ends up repeating the sentiment that there’s simply “So much stuff / So much American stuff.” The track “Moonman” impeccably portrays the feeling of looking up each night to re-discover the celestial orb glowing in the dark sky. “Yeah I guess / I am the type / To make a big deal / About the moon,” Hakim croons to spacey keys and dramatic saxophone.

On “New Guy to Look At,” Hakim rattles off observations about the strangers in his subway car while the bassline gradually gains momentum like a train heading down the rail. The song somehow sounds exactly like being inside a New York City subway station, with Nathanson’s saxophone echoing over distant murmurs and a barbershop quartet. Nathanson’s intimate poetry anchors every song to the visceral realm, and Hakim’s vocal delivery of these contemplations is fervent, as if they were his own. The musical arrangement enhances each component to create a sum far greater than its already-remarkable parts.

Like a commercial break in the middle of the otherwise slow-burning record, “Cry and Party” possesses a uniquely vibrant energy. “Youth. That’s a biennial, right? Yeah, I just planted three on my front lawn. They were like bulbs, old ones. The ones with the filaments and the heads too big for their bodies? Yeah, you know, biennials. Cry half the time, party the rest.” Hakim’s spoken word is set to lively bongo drums and a dance floor–worthy tempo. The song ends with a soundbite of, perhaps, the first person to ever hear it. “Did you ever do that before? … That is the fucking coolest thing I’ve ever heard,” the bystander says, cough-laughing in disbelief. While the album isn’t pure recorded improvisation, it did come about in a spontaneous manner. The first time Hakim and Nathanson got together to play music, Hakim sang a few of Nathanson’s poems while playing some chords on a Fender Rhodes. “It seems we were lucky. Looks like we got ourselves to the moon the old-fashioned way,” Nathanson says in the album notes. “I played along and that was that.” The duo spent about a year solidifying and re-recording the arrangements, but the unfussy, impromptu attitude behind every track remains audible.

If Small Things was set to a film in the Big Apple, “All The Things You Are (Reimagined)” would be the pinnacle of the soundtrack, the song that plays when the protagonist is about to give up. I can see him now: He’s walking, deflated, through the steam stacks while a melancholy saxophone plays on. A genre-defying drum beat kicks in, and through Nathanson’s poetry, Hakim likens the sensation of playing jazz music to landing among the stars—“A breathless heaven,” he describes. And it’s true; if a saxophone is played right, it transports you somewhere. An underground nightclub, a subway station, a dark street on a stormy night. Maybe even the moon. –Mekenna Malan