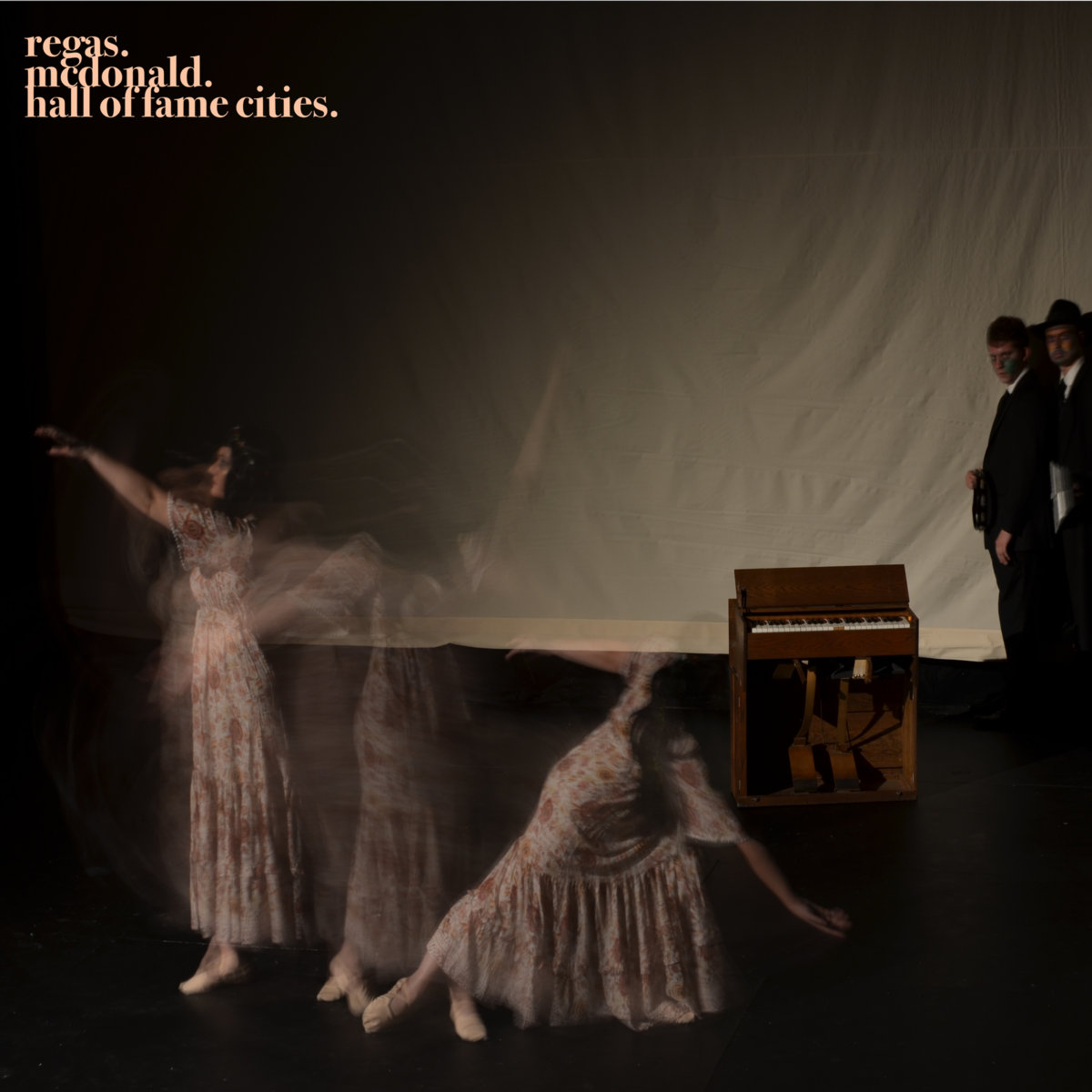 The Ohio avant-pop cousin duo of Sam Regas and Matt McDonald, Regas-McDonald (or who I’ve been referring to in my head as Regwood Mac), have just released their sophomore album, Hall of Fame Cities.

Heraclitus said, “No man steps into the same river twice,” and the same could be said for Regas and McDonald when they step into a band. Beginning their musical collaborations in highschool with the Big Sweet and later the Rockwell Family Band during their college years, the prolific cousins have put out a handful of different records as several different bands, each iteration a new river.

While The Big Sweet was middle-of-the-road indie rock and the Rockwell Family Band middler-of-the-road bar rock, Hall of Fame Cities sees the previous lineups sublimed away. Boiled down, this remaining sound is a clear reflection of the two cousins vision as a highly concentrated extract. Weird and sophisticated, this is a record made by people who clearly know so much about music that even in its strangest moments, whatever they create cannot help but resemble thoughtfully composed and cleverly arranged music. The album cover is appropriately arty and the track names are esoteric and elegant—I don’t know what they mean, and that’s how I like it. I listen to Wilco—what do you want me to say?

This release being their follow-up to 2020’s Toward Void and Vistas, the band once again shows growth and new direction with a more orchestral bent. The effect is more baroque, a bit jarring at times, but the sense of grandeur throughout has me absolutely impressed. Drama and tension dance playfully with a real vintage character on this self-produced album, and I truly enjoyed each listen more than the last.

“For the Vain and Lepered” opens the record as a theatrical carnival ride with the sharp, vivid effect of spinning on the senses. Soon, we are slowed to a near halt and cradled by Regas’ vocals before exploding off in tandem flight, carried out of the shrill, “Day in the Life”–type orchestral hell with light, jaunty piano and horns. Dynamic movement and an exaggerated, Beatles-esque ability to combine multiple, distinct songs into one song seem to be a theme in this record. We see it again in “Impressions 2: The Girl Who Tried to Find Her Northern Lights,” a solid 14-er complete with obscure samples and a final two minutes of slowly unravelling melodica topped with a discordant, bonus harmony.

“Bridge and Canasta” has a lovely piano melody that builds and swells over a healthy nine minutes, but it’s “Windcandy Muse” that wraps up the album as the most approachable and darling song. The acoustic guitar soothes while ambient synths fold over itself in a dreamy respite, contrasted by the motion of the previous tracks. It’s a perfect gentleness to end Hall of Fame Cities on and another demonstration of the vast range and impressive potential these young musicians show. Following this band since their early days, this record is an immediate favorite for me, their best work to date and a powerful demonstration of the PhD.-level music-nerd capabilities of Regas-McDonald. –Dylan Bueche