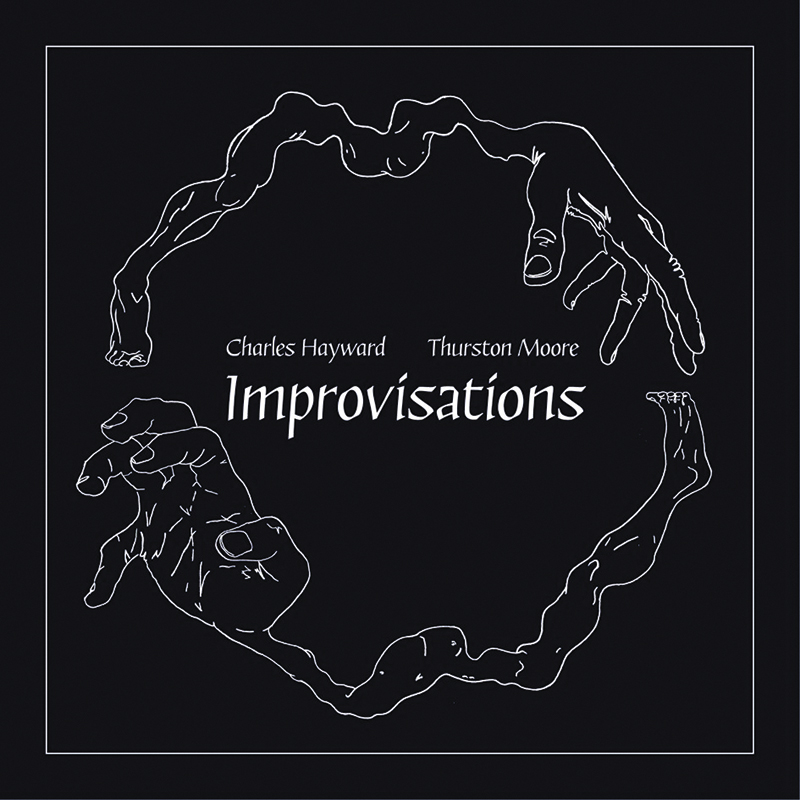 Charles Hayward (of This Heat and others) and Thurston Moore (of Sonic Youth and many, many others) are set to release Improvisations, a record culled from one afternoon of improvised sessions. The seven tracks sit comfortably at maximum intensity and volume. Hayward’s drums are heavy and forceful against Moore’s screeching guitar playing, a mixture that’s riddled with sonic conflict. Improvisations more than asserts the duo’s technical skill, but not so much their cooperative abilities. These two names together on an album is the stuff of fantasy for post-punk and experimental rock fans, but the album never reaches the explosive synchronization it could have.

Free improv is all about communication and interplay, and something’s not matching up here. While there are plenty of moments where Hayward and Moore employ clever shifts or work together toward a rewarding climax, more often than not, it feels like the two are only concerned with their individual parts. In contrast to Moore’s increasingly tame studio albums, here his guitar sounds more deranged and mutilated than it has in years. Any sense of traditional pitch or harmony is buried in layers of distortion and effects, resulting in an exploration of the possible timbres of the electric guitar. While these different sounds are essentially limitless, Moore seems intent on finding ends.

This makes it even more strange that Hayward’s drums are stiff and predictable, a consequence of both his performance and the mixing job. Most of his playing consists of clean, tight 4/4 patterns, which rarely complement Moore’s frequent disregard of rhythmic structure or planning. On top of this, the pristine drum production sounds out-of-place against guitar feedback and stuttering noise. The occasional section that does find Hayward and Moore matching up in the ether ends quickly, and the duo returns to stability without exploring the full possibility of complete liberation. It’s as if the endless prospects of entirely unstructured improvisation scare the duo back toward the safety of conventional structures.

While it would’ve been nice to hear Hayward move his drums more toward Moore’s freer side, improv is a two-way process. If Hayward’s style continually dictates steady rhythms, it’s up to Moore to find his place in that structure, rather than stubbornly abusing his guitar into impenetrable walls of noise. The best example of what Improvisations could’ve been is the closing track, “B4.” While still relegated to 4/4, Hayward’s drumming is lighter, busier and more intricate, while Moore cuts the distortion (a little) and gives the mix more room to breathe. The track is sinister and driving, while the rolling toms and metallic, scratchy guitar finally feel like they’re supporting each other rather than fighting for the spotlight. After over 40 minutes of unbalanced tracks that lack consistent give-and-take, it’s a relief to hear some serious, thoughtful improvisation.

Neither of these artists have anything to prove. This limited issue, vinyl-only release will miss most casual fans, and the quality of Improvisations will have no bearing on hardcore follower’s reverent opinions of albums like Deceit and Sister. The upside is it gives Hayward and Moore the freedom to put out records like this, full of their curiosity-driven experiments, but it also means they might not be as concerned with the final product as they were 30 years ago. More than anything, Improvisations sounds like two well-established, talented musicians letting go of all inhibitions and letting their ideas flow free, regardless of outcome. –Audrey Lockie