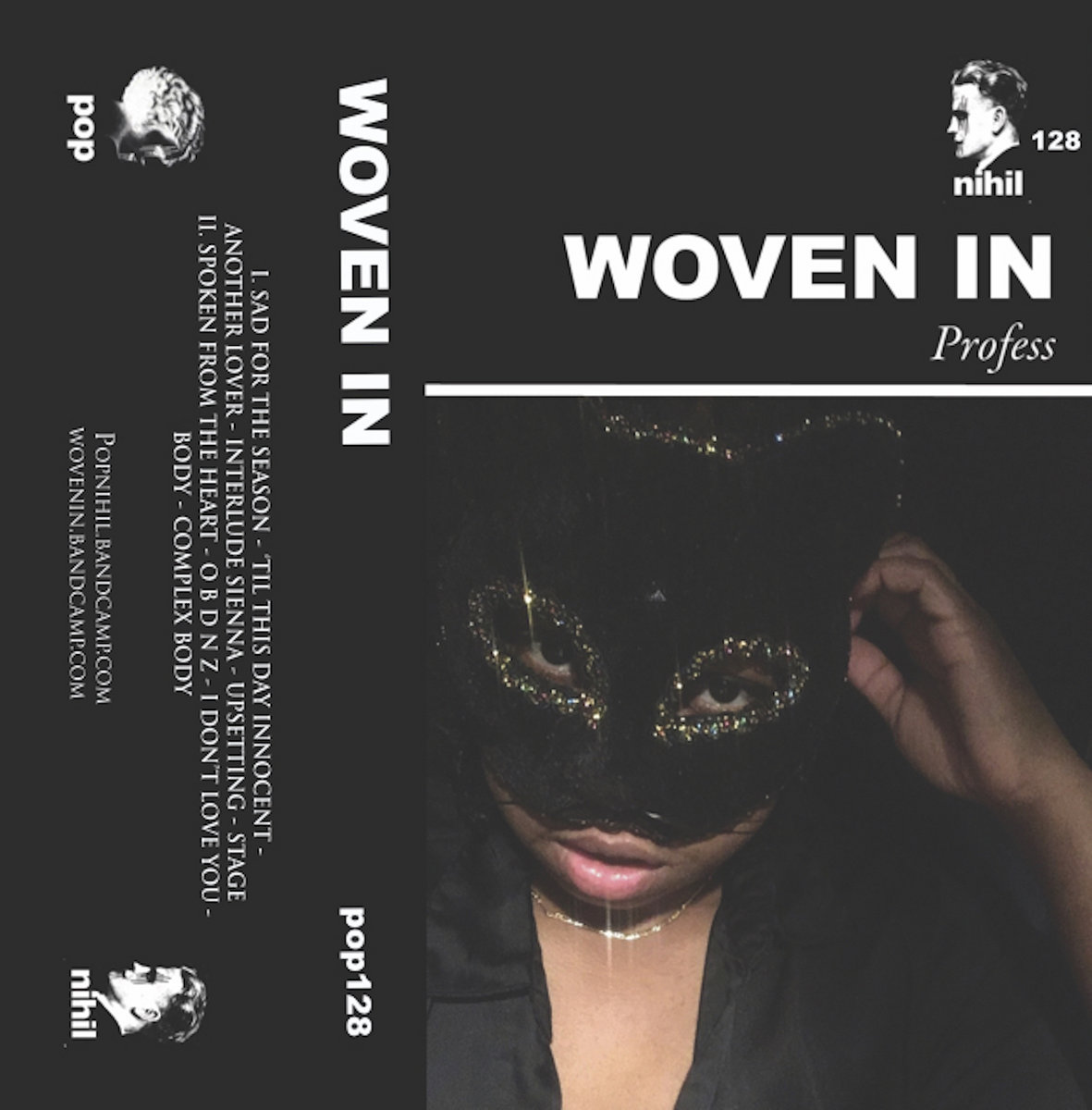 If you think of what ‘90s grunge would have sounded like if it used ‘80s synths, then you’re maybe halfway to understanding what Woven In’s new album, Profess, sounds like. The darkwave musician from Baltimore, Maryland takes familiar and comforting sounds and turns them into experimental oddities. While not fully self-described as such, Profess is an incredibly approachable experimental album that could be a great doorway for those looking to dip their toes into some farther-out sounds.

To call Profess simply an experimental darkwave album is to do it a disservice, though. Profess is populated with sounds from post-punk, synthpop and shoegaze music to name a few. There’s even quite a few synth riffs in there that make me think of the dungeon levels of ‘80s side-scroller video games. The blend of all of these sounds makes every one of Woven In’s songs unique from the next, and makes the album an interesting listen overall.

The collection of 11 songs is only about half an hour, so you don’t get much time with each track. It is plenty of time, however, to get to know Woven In and her distinct style and tone.

Profess starts with the song “Sad For The Season,” one of the few songs Woven In lends vocals to. The track starts with epic synths that come and go in waves. The synths are later joined by a perfectly complementing bass that rumbles your chest. While synths dominate this track, it’s met with a somber message as Woven In’s vocals repeat over and over, “Sad for the season / Sad for no reason / Pick apart my feelings / And on to the next thing.” It is a reminder of the repetitive nature of depression and anxiety and how cyclical those experiences can be.

Woven In rides through waves of somber to danceable songs, using repeating vocal and synth samples to make it happen. Woven In only lends their own vocals to a few songs, namely “Another Lover,” “Stage,” “I Don’t Love You” and “Complex Body.” Her vocals have a distinctly shoegaze feel, which nicely juxtaposes the aggressive synths and creates a beautiful balance.

The album is not only wonderfully balanced sonically, but in tone as well. While there are shifts from the somber tones of “Sad For The Season” to more danceable riffs on “‘Til This Day Innocent,” Profess is also not without its humor. The second-to-last song, “Body,” samples vocals from the iconic Riff Raff vine, “My main goal is to blow up, and then act like I don’t know nobody!” To say I absolutely lost it laughing the first time I heard it would be an understatement. And yet, despite the comedy of it, it’s paired with deep rumbling synths that make for quite the groove to dance to.

Profess rounds the corner back to a more somber tone with its closing song, “Complex Body,” which has a blend of trap percussion and synths that makes me think of a prom scene in a movie set in the ‘80s (not to be confused with an actual, full-length movie from the ‘80s). The vocals also discuss just what the name suggests with Woven In singing, “Complex body / you don’t understand… Black body / you don’t understand.” The introspective and self-assured tone of this, both sonically and lyrically, makes the album come full circle and feel complete.

Woven In’s Profess takes classic sounds and styles and turns them into interesting experimental versions of themselves. The album is a fascinating and perfectly balanced blend of synthpop, darkwave, shoegaze and more. If you’re someone who’s unsure about the experimental genre, I would definitely suggest checking out this album, and maybe it will tip the scales. –Marina McTee