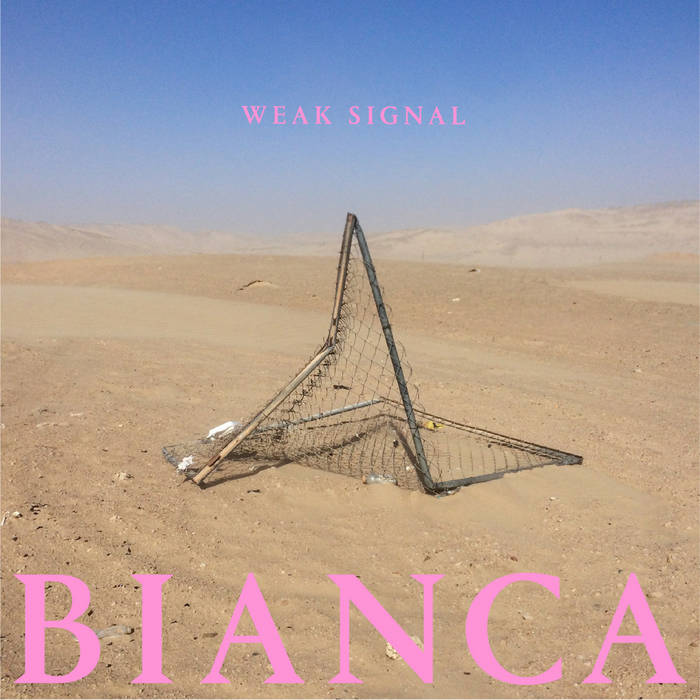 WEAK SIGNAL’s second full length album, BIANCA, is an atmospheric bath of high energy masked behind lethargic outpourings of static and reverb. The band’s sound is a familiar one, but there are aspects here that keep WEAK SIGNAL on the refreshing side of the dial.

BIANCA begins with a bass line straight out of 1991: “I’M A FIRE” crashes through the speakers unlike anything I’ve heard for a decade (or three). There is a lot here that conjures images of a life with a Sonic Youth soundtrack. The album is a sparse 34 minutes and it plays quickly, one track pouncing upon the previous so, at times, songs seemed to be a mere continuation of what preceded it in a pleasant fashion.

The two singles released early, “DRUGS IN MY SYSTEM” and “BARELY A TRACE,” both comprise dark undertones pinned to paranoid and lonely experiences—quite an interesting five-minute trip to take, but not one that deviates terribly far from the bones of the album. The sparse standout track “COME BACK” is a story told sparingly, but is one you can feel. The harmonies between the male and female vocals are haunting and ominous. WEAK SIGNAL spreads the guitar so thickly over the entire thing, adding flare and accents in the most perfect places.

“DON’T TURN AROUND” feels like an early deep cut from Nirvana, with such a solid riff that sounds like it came to be in a Seattle garage. It plays well as a highlight in the middle of the album. Elsewhere, there are subtle social statements inside of fast-paced rockers like “VOICE INSIDE MY HEAD,” which ends on a toned-down fade out, and more straightforward proclamations of personal freedom in slower gems like “I’LL STAY,” a track which blows the lid off at its culmination.

BIANCA is a lot of fun. As a listener, I found a lot of wonderful ingredients that made the whole thing a splendid homage to garage days, grunge reveries and avant-garde eclecticism—appealing to anyone who digs Jack White, Sharon Foo, Kurt Vile or a plethora of other indie spirits that have littered the world with their unique musical talents. Give BIANCA a try—I’m convinced you’ll find something to enjoy in the brief amount of time it will take to listen to the whole LP. –Billy Swartzfager