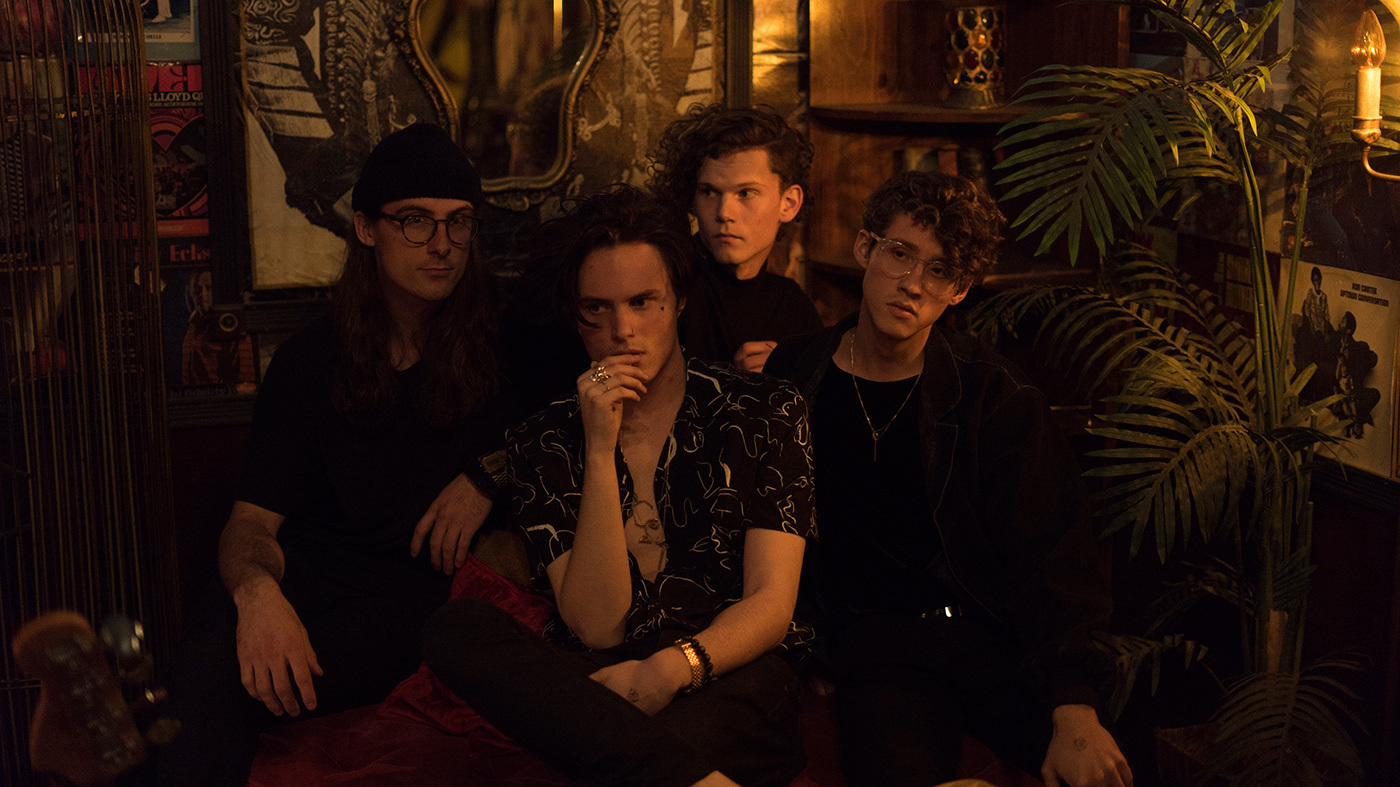 Think late-’80s, early-’90s pop ballads—a dangling earring, a deep V-neck with dark hair curling over the nape, synchronized dance moves and a music video with moody choreography and pink overtones. This was my first impression of local act Ivouries—but I soon found out their sound is more malleable, bending and filling the space of whatever environment they want to live in for that specific track. The four-piece collective creates music that is both warm and chilled, a mix of energized pop and bedroom electronics.

Ivouries began as a solo project for Jaxon Garrick, now lead guitarist and singer, as he crafted and performed music in his mom’s basement. Then, the realization sprung that he would need backing musicians as the project gained momentum. Garrick says, “I was horrified of playing a solo set and then got my friends to play with me, and the lineup we have now just really works. It just felt natural and took a bit of pressure off of me.”

Finding musicians was also a natural process, as Garrick met keyboardist Adam Fuller and lead-bassist Casey Schrader in elementary school, while drummer Devin Mitchell was scouted through SLC’s local music scene. “I knew Devin was a sick drummer, and what I loved about him was his embrace of the changing musical landscape we were all facing,” Garrick says.

Garrick understands the significance of having band members that are genuine and able to relay their own opinions and critiques. Having grown up together—besides Mitchell—and expressing similar musical intentions, the four-piece is able to produce content in a creative space that is candid and open. Garrick says, “It’s really nice to be able to come together and make something that I could never have done on my own.”

“It just felt natural and took a bit of pressure off of me.”

Garrick also notes that the band members share a similar disposition in how they view electronic music. Having experienced criticism in the past, finding members that appreciated how computerized sounds and electronic productions could elevate the band took precedence. “A lot of my friends were really snooty about, like, Ableton and other computer music-production stuff because it wasn’t ‘real,’ and I hard-disagreed with that,” he says.

As their sound bends and morphs into whatever creative landscape they decide to display, Ivouries hope that most listeners can find a leg to stand on, but pleasing everyone has never been their top priority. “I would hope everyone could find something they like … I think everyone loves a good hook, though, and we try hard to make our music have that pop flair because we all love it,” Garrick says.

Although the band takes on different musical identities, it’s fair to say that the main genre they fit into is pop. “It’s like pop, but anxious and kinda moody,” Garrick says. With an understanding of the Salt Lake music scene, Ivouries fill a more abrasive-pop niche gap—Garrick notes there may be a lack of that sound in the city, as some artists might be afraid to squeeze into this specific label. Progressing as a collective in Salt Lake poses challenges and benefits for artists, but as a pop band, Ivouries notes some of their fanbase is isolated due to Utah’s strict liquor laws and venues’ 21+ allowance. As a band grows, there are only so many venues available, so cutting off the lifeline that is the bubblegum-pop-excitable, under-18 audience can be detrimental.

“I think everyone loves a good hook, though, and we try hard to make our music have that pop flair because we all love it.”

Against these obstacles, Ivouries say that performing and advancing in an area such as Salt Lake has several advantages. “One of the benefits is the tight-knit community. It’s really cool to be able to talk to venue organizers directly and work with people on a very personal level,” Garrick says. “People really hype each other up and aren’t afraid to like artists that have a bunch of different backgrounds and genres.” Garrick first began playing in varying rock bands until Ivouries’ conception, where their energetic pop sound took over—they then began playing with soul bands such as Joshy Soul and Brooklyn Kohl.

Now a fine tuned four-piece, Ivouries have grounded themselves in an area full of opportunity and astounding local talent. To stand apart from the crowd in their live performance, Garrick notes that—while it may sound trite—they really try to lose themselves in their music while onstage. He says, “There is a beautiful moment live that I always strive for, which is everyone in the crowd and onstage … experiencing the same thing at the same time and are surrendering themselves to it.”

Though times of isolation and hunkering down for quarantine have proven troubling, Garrick notes that while it has been difficult, a pause for self-exploration has been helpful. In terms of Ivouries, he says “I’ve just been really taking music more seriously, and the upcoming Ivouries stuff will be real different in terms of … effort and boldness.”

Be on the lookout for new music from Ivouries—they can be found on Spotify and other streaming services—and follow their social media handles: @ivouriesmyspace on Twitter and @ivouries on Instagram. Also, make a point to tune into SLUG Mag’s Virtualized show to watch Ivouries perform on Feb. 19 at 8 p.m. and celebrate SLUG’s 32nd anniversary!