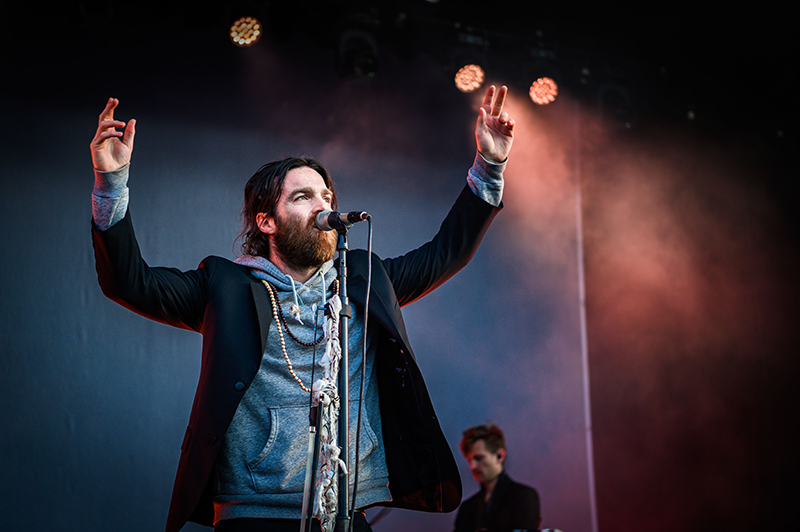 It wouldn’t be a Utah summer without a Twilight Concert Series; good tunes, yummy food, and crowds of friends make the concerts every Thursday night a worthy adventure. Once again hosted in the Ogden Amphitheater on Historic 25th street, music lovers gathered in the open air venue, awaiting an evening of music from David Moon, Beacon, and Nick Murphy. Lining the path to the concert, Ogden’s 25th street is home to local breweries and cheap family bars. A particular favorite, Brewski’s, is the place to be. After grabbing a quick drink and walking the sunny street, one can choose to munch on food truck delights from Lucky Slice and Thai Curry Kitchen, returning vendors for multiple years in a row. As the area continues to grow, so does the traffic, which was a culprit in the slow start to the crowds in Ogden on Thursday night. Starting the night off, local artist David Moon danced across the stage in a jumpsuit, green hair, dino earrings, aviators and a giant smile. Returning from a recent trip to Europe, Moon entranced the crowds with his ’80s-esque experimental music.

Following up Moon was the two-man duo Beacon, comprised of vocalist Thomas Mularney III and keyboardist/drum pad-ist/guitarist Jacob Gossett. They played electronic music with a mix of mellow vocals and voice-changing effects. Their visual production consisted of smoke, lights and visuals dancing across the stage. This was Beacon’s first time in Utah, the show being a part of a tour with Nick Murphy across the U.S. With a setting sun and buzzing crowd, the amphitheater was filled with anticipation for Nick Murphy. Lights began to flicker off the stage and the energy levels increased as Murphy walked onto the stage. Saxophone, guitar, violin bow, piano, drummer and bass joined together for the culmination of the second Twilight show of the summer. With even more lights and smoke, Murphy strummed on his electric guitar with a violin bow, playing all of his hits, including old school “Gold.” The sky lit with the fiery sunset as the Ogden Amphitheater enjoyed the soothing musical tradition of the Twilight Concert Series.

All photos by Colton Marsala.