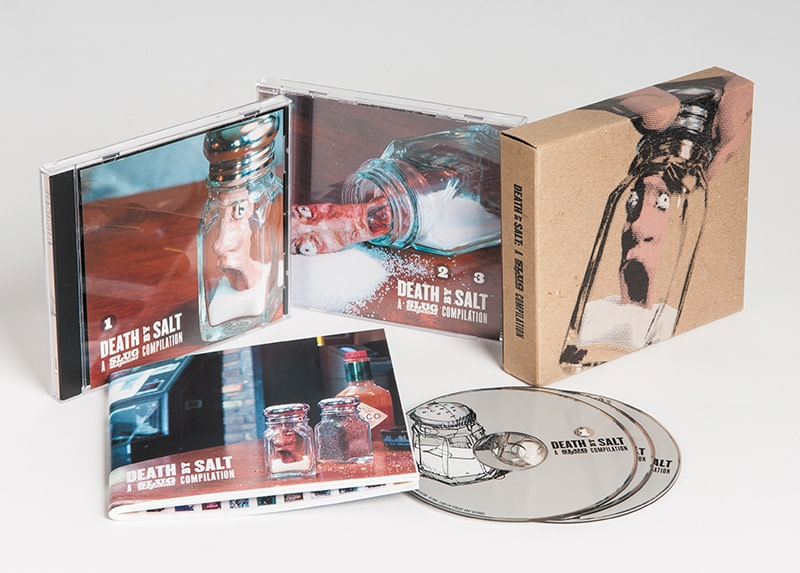 A Pinch of Salt: A History of Death By Salt

There had never been anything like it: Released in 2004, SLUG Magazine’s first Death By Salt compilation offered an overview of a wide array of local musicians as never seen before. It was a snapshot of the Salt Lake music scene in the early 2000s, featuring bands ranging the entire spectrum of musical genres, which have had a profound impact on the music and cultural environment of Salt Lake and beyond. On the verge of releasing the fifth volume in the series, it’s time to reflect on the growth of the compilation and SLC’s local music scene.

SLUG Editor Angela H. Brown recalls that, when she first bought the magazine in 2000, she wanted to renew its focus on local bands. “It was the ’90s, and nobody [outside of Utah] gave a fuck about Salt Lake,” she says. “I wanted to bring back the cool things about the old-school ’80s punk scene—people were moving out of state because we didn’t have a sustainable local scene.” Death By Salt was intended not just as a way of supporting the scene but also of documenting it.

Death By Salt was a three-CD box set with a booklet. A call for entries netted hundreds of submissions, from which 59 bands’ opuses emerged, including yours truly’s “Get Stakerized!” DBS II (2006) featured 42 tracks across two CDs and included trading cards of all the bands. By DBS III (2007), it went genre-specific, with 10 rock tracks spanning a vinyl record and sleeve artwork resembling a Soviet-style depiction of Brigham Young and the Mormon Temple in the background—designed by Paul Butterfield and Dave Styer—with a digital download included. DBS IV (2008) was one CD of local noise/industrial acts, featuring art by Cien Watson.

Rebecca Vernon of Violet Run, SubRosa and Stiletto was SLUG’s Associate Editor from February 2002 to July 2005, and she helped organize and get the word out for Death By Salt I and II. “We wanted to put together a compilation where we put a lot of thought into the art and sound quality,” she says. The entire SLUG staff met for hours, listening to every track all the way through, and the decision-making process was intensive, to arrive at a collection that faithfully represented the local music scene. “For DBS II, we decided to tone it down a bit and put out a double-disc compilation, making it a bit more competitive for bands to get on.”

Sound Engineer Andy Patterson did much of the recording and mastering on both DBS I and II. “I remember a lot of bands coming in just to do one song for Death By Salt, and a few bands used alternate versions of songs from their records,” he says. “One fun memory was getting Mooseknuckle on the comp. Mooseknuckle was a joke band I did with Tyler Smith. We were recording the Form of Rocket Lumber record and we would work late into the night, and we’d be pretty hammered, so we would make songs. I played guitar and drum machine, and Tyler would ‘sing.’ I heard that some people were mad that our song was on the comp because they didn’t know it was a joke band.”

Patterson recorded the bands in his studio as needed. “I wasn’t ‘mastering’ the songs,” he says. “I didn’t want to mess with the sound of any of the tracks. I just wanted the comp to flow well and adjust volumes of different tracks so the listening experience was consistent. I guess the biggest challenge was to not to screw up anyone’s hard work by messing with the overall sound of each track.”