After residing in limbo for a time, the controversial graphic novel SKlN has finally been published by America’s Tundra Publishing.  Hopefully, comic stores will make it available to a large audience, since it deserves to be seen.

But Martin ‘Atchet (as he’s named by the other skins) is different: seems he’s been born with phocomelia (foreshortened limbs; in this case his arms) due to his mother’s use of the sleeping pill Thalidomide.

This plot twist makes for a fascinating story, and Milligan and McCarthy expand on it remarkably. Martin is drawn to the “skin” lifestyle due to his condition and the resulting psychological effects. Further, only by the skins is Martin truly accepted.

I’ll resist the temptation to reveal further plot developments, except to mention that the story is, in fact, a tragedy.

But the fact that SKlN is depressing shouldn’t keep readers from picking it up. Besides its informative content about Thalidomide, the book paints a harrowing picture of the difficulty in living with birth defects. Plus, it’s nice to see another positive look at skins in the media after all the negative stereotypes widely circulated. Beyond this, it’s just a story about a human. While the humor may be less than expected from typical Milligan-McCarthy collaborations, the impact is powerful.

Scripter Milligan fleshed SKlN out from Brendan McCarthy’s story idea, and he did an outstanding job. Milligan’s strength lies in great characterization, told through narrative and natural (realistic) dialogue.

And the story is visualized dramatically by McCarthy (surely one of the comics top three artists [besides Bill Sienkiewicz and Dave McKean]), Especially notable is a scene in which Martin is “dosed” by hippies, imaginatively rendered. Color artist Carol Swain manages to add warmth and emotion to McCarthy’s drawings, in an added bonus.

Unfortunately, whether due to its controversial nature or maybe just because comic stores around here are afraid to carry titles that are “different,” so SKIN is hard to find. But trust me, it’s worth the effort of the hunt. (Color, $8.95) 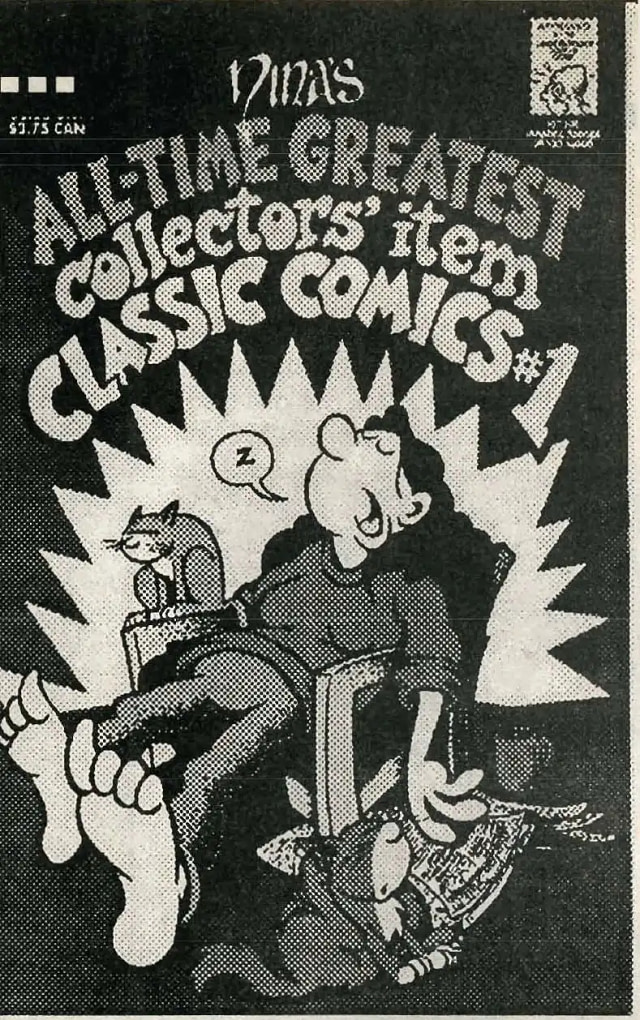 For fans of cartooning’s “rude humor,” COMPLETELY BAD BOYS is ideal. The simple premise behind the strips is the cruel misadventures of brothers Billy and Bobby, who usually doled out torture to victims Fatty and Peggy.

All of this is rendered in a delightful style by the talented Williams. Anybody who looks back fondly on childhood memories of picking on other kids (or being picked on) can find something to relate within the pages.

Perhaps even more impressive, though, is that Williams delights in depicting the rampant nihilism and naivete of youth without resorting to sappy, jingoistic cutesiness. The Bad Boys have no redeeming values or morals to teach, other than ruthlessness and exuberance.

Williams has a very distinctive cartooning style that works well with this material. The bug-eyed, grinning Bad Boys look maniacal whether setting Fatty on fire or pushing Peggy down an abandoned mine shaft.

Perhaps the only thing negative that can be said about COMPLETELY BAD BOYS is that Wil- liams’ attempts to tone down the Bad Boys for newspaper syndication are included. While these strips are not without merit, they lack the bite and viciousness of the best material.

Oregonian Williams is one of the lesser known comics talents of the Pacific Northwest, having previously been seen in collections like BUMMER. Hopefully, Fantagraphics will follow up COMPLETELY BAD BOYS with more Williams material. Williams deserves to find a wider audience.

I know how much you like women who talk about their crotches. So go pick up Madonna‘s SEX book, you pathetic fool. If you want true entertainment from a crazed cartoonist who receives such letters as, “I wish the semen would stick her lips together like glue and then I’d be free,” you need to pick up Julie Doucet’s newest Dirty Plotte issues (along with all four backissues).

Julie’s sense of humor, as we know, her scraggly-looking characters are all part of a world of strange sexual fantasies and frustrations. But, not only does she play with sexual illusions in her short three-page stories, but she also presents the bizarre antics of the real world in a beautiful feminine sense.

So the drawings are a little on the cute side. This comic does have potential. Her characters, when angry, look just like Peter Bagge‘s (Hate) characters: all teeth and bloodshot eyes.

But, Nina does write of her frustrations with cartooning. One editor says she’s too negative. Another says her work is too cute and must be more negative. My favorite story was when she needed to draw something for an underground comic. She draws a scrawly, bitchy-looking woman, menstruating and repeating a script that states, “Ahem, I’ve slept with thousands of men and I hate them all,” (a close upon a vulva.) The director yells, “Yeah! Female rage! You tell ’em babe!” The whole scene was so perfect of what’s expected of a female cartoonist, especially in the underground.

Check out more from the SLUG Archives:
Books and Literature: December 1991
Comics: February 1992