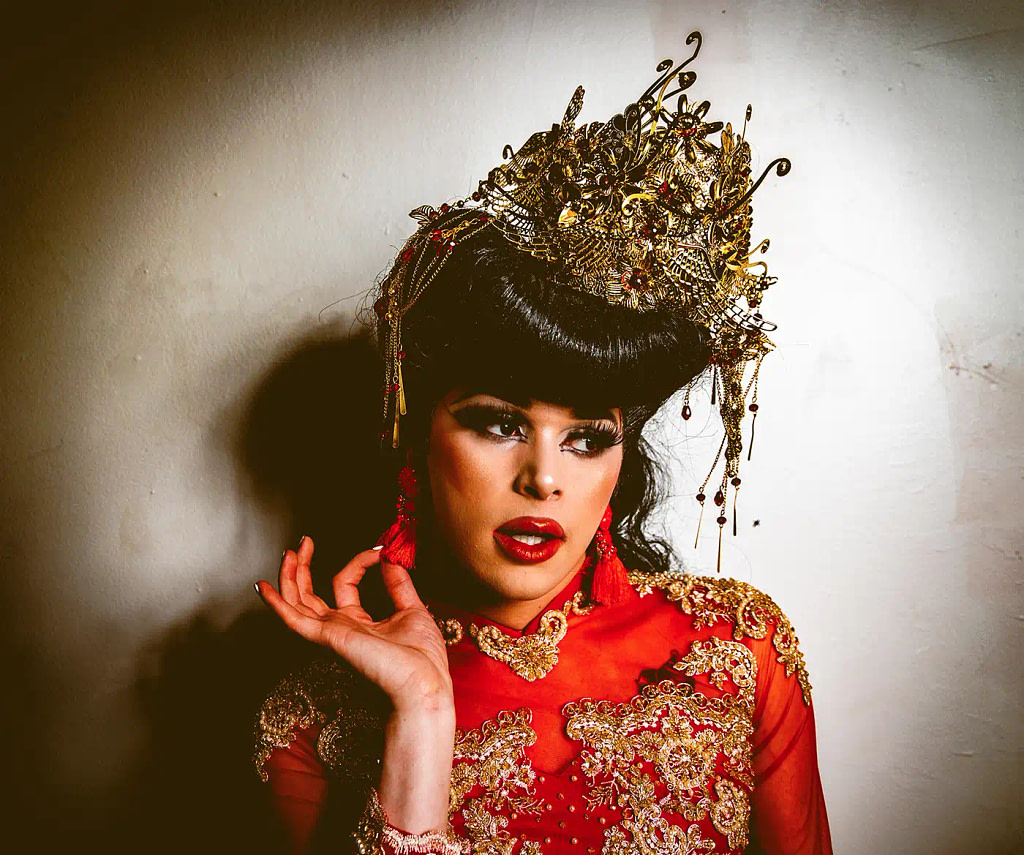 An artist and performer in more ways than one, Hoe Shi Minh has been singing and dancing her way through life and doing it extravagantly. Having discovered Ru Paul’s Drag Race at a young age, Hoe Shi Minh developed an early interest in watching drag, and it wasn’t long before she began crafting her own identity within the drag world.

Hoe Shi Minh’s first experience in drag was at a Valentine’s Day singles party, when she decided, “I’m going to show up in full beat, and I’m gonna be gorgeous,” she says. It didn’t go exactly how she had planned. “I had no idea how to do makeup, so I showed up absolutely awful,” Hoe Shi Minh says. Rather than become discouraged and give up, Hoe Shi Minh took this opportunity to practice and grow. “I was like, ‘You know what? They need to know that I CAN be pretty. I know I can be pretty.’ So I did it out of spite. I just kept doing it, and then I got good at it,” she says.

When Why Kiki first opened in 2021, Hoe Shi Minh went to check it out and discovered the stage for drag performers. “At the time I wasn’t technically an actual drag performer,” Hoe Shi Minh says, “but I was like, ‘I do drag!’ So they told me to come in full drag and maybe they’d book me, so I did, and now I’m a full-time drag queen.” Hoe Shi Minh has performed in Los Angeles, Boise and Denver, but she has found the most supportive drag community in Salt Lake City. “We all help each other to get better,” she says. “There’s sort of like a silent competition with everybody, but we’re all friends.”

“I was like, ‘You know what? They need to know that I CAN be pretty. I know I can be pretty.’ So I did it out of spite. I just kept doing it, and then I got good at it.”

The support in the drag community goes even further than friendly competition and has provided Hoe Shi Minh with an entire drag family. “My drag mother, Lilia Maughn, really helped me with getting my first bookings and making my makeup a lot cleaner. She adopted me and told me I also had three other drag sisters … we’ve been a very close family,” Hoe Shi Minh says.

With a background studying musical theatre at the University of Utah, Hoe Shi Minh’s performances often feature backup dancers and extravagant dance routines. “I love dance, and I love doing choreography. I just like to put on a big performance,” she says. When performing by herself, Hoe Shi Minh’s performances range from live singing to making her own mixes and creating numbers with homages to people such as Tiffany Pollard, Gemma Collins and Nicki Minaj.

Although Hoe Shi Minh maintains a love for musical theatre and more formal artistic settings, she has found greater comfort and freedom within the world of drag. “In an alt setting, it’s way more chillax,” she says. “When you’re cast in a musical, you have to do that show and you have to do that character. [In musical theatre] you’re told what you’re performing, but in drag you get to choose what you’re performing.” Hoe Shi Minh has been able to take the singing and dancing aspects from musical theatre that she loves and incorporate them into her drag, giving her the best of both art forms.

As a resident host at Why Kiki, Hoe Shi Minh fully embraces her creative freedom both in her own performances and in helping to determine overall themes for shows, as with the bar’s famous Shrek night. Surprisingly, Hoe Shi Minh initially had some trouble getting traction for a night devoted to Shrek-themed drag, but she didn’t give up. She says, “Eventually my boss was like, ‘If you set it up all by yourself and you do everything, we can have a Shrek night.’ And then that night was one of our biggest sellers.” Fortunately for all of us, Shrek nights have been such a big hit that they will undoubtedly be returning to Why Kiki in the future.

“[Drag] is larger than life. It’s out of the ordinary and extra, like when someone will Irish goodbye a party. That’s drag. Drag is just an elevated way of being.”

Both on and off the stage, drag is integrated into Hoe Shi Minh’s personality. She says, “Weirdly enough, I don’t think [drag] has changed my personality—I think it’s just enhanced it. It’s sort of given me ownership over who I am.” For Hoe Shi Minh, drag isn’t just a job or a hobby—it’s a way of life. “[Drag] is larger than life. It’s out of the ordinary and extra, like when someone will Irish goodbye a party. That’s drag. Drag is just an elevated way of being,” she says.

To follow along with Hoe Shi Minh (and to get updates on upcoming Shrek nights and more), find her on Instagram @hoeshiminh. Or, to connect with her in person and to watch her incredible performances, stop by Why Kiki most Saturday nights and every Sunday for brunch.