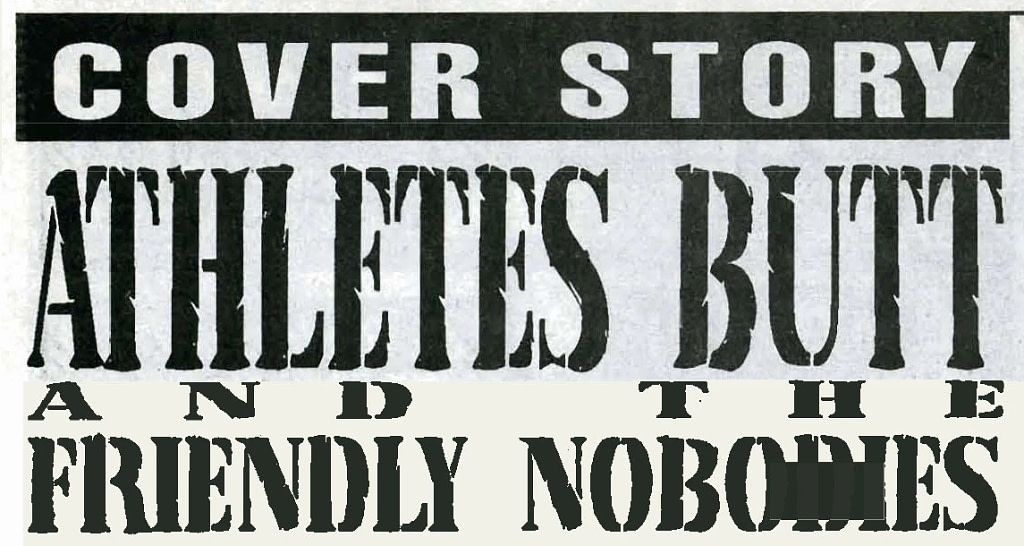 Athlete’s Butt And The Friendly Nobodies are by far one of the only true punk bands in Salt Lake City. A band that emerged from the belly of the Salt Lake underground about two years ago has become one of the more interesting musical units in Salt Lake. The band claims its only true foundation arose from an overwhelming amount of boredom, but, with no formal musical training, this group of artists has transformed itself into a very interesting band. 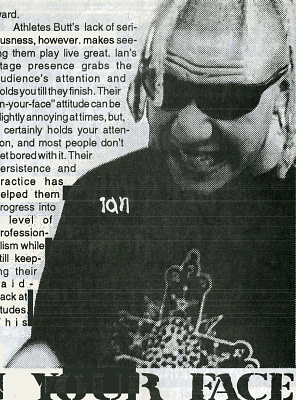 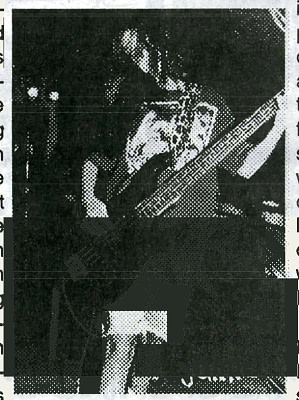 The band is one of the very few in Salt Lake that actually has female members who both write and perform very well. The band consists of Jaime Capps on bass, Andrea Castle on guitar, Leonard Curtis on drums and Ian Sorenson does the singing. Considering the band had almost no experience when they started, the music is really good and very interesting. The band’s music is simple but is always performed very tightly. Ian, Salt Lake’s noted spokesperson for the artist elite, is one of the best front persons that will ever come out of Utah. His crazy antics, wild stagemanship and classic punk-vocal style are what give theband their unique sound and image. After a plethora of vocalists came and went, Ian is the fifth vocalist for the band. It seems just as well because I don’t think the band would be quite as good without him.

Even though the band’s only outspoken statements are “People need to fuck off” and “Chickens deserve rights too,” they really do have a political side to them that is quite valid. Though they come off as jokers and are rarely serious, their music is laced with statements of human rights and political oppression. You will see one or all of them at any political musical gathering and they often play at these types of events. They have all been kicking around the punk scene for years and now are making an effort to see that the music in Salt Lake moves forward.

Athlete’s Butt’s lack of seriousness, however, makes seeing them play live great. Ian’s stage presence grabs the audience’s attention and holds it till they finish. Their “in-your-face” attitude can be slightly annoying at times, but it certainly holds your attention and most people don’t get bored with it. Their persistence and practice has helped them progress into a level of professionalism while still keeping their laid-back attitudes. This makes them personal and amusing.

The band members’ differences of opinion (musically) and Leonard’s constant bitching has blended to give the band their unique sound. Also the ability to hang with it and pay the price has made people take them seriously. All this  has helped them become one of Salt Lake’s more appreciated bands. I know it’s

not a good thing to say about an “alternative” band, but they are actually becoming quite popular. 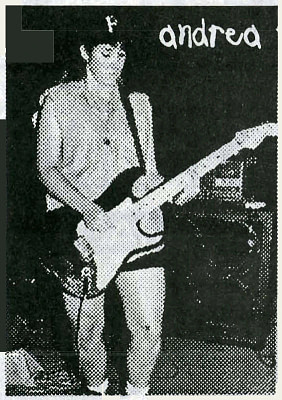 Over the past two years, they have released a five-song tape, released two songs on the Big Mountain Benefit Compilation and did a short tour to the Pacific Northwest. The music is not really accessible to Salt Lake’s venues, but they still seem to get gigs. If you have never seen them perform live, you really should; they always provide a great time. They will be playing at the Bar & Grill Thursday, September 17 with Organized Confusion. It is 21 and older, but keep your eyes open for future all-ageshows.

Check out more from the SLUG Archive:
Interview: Lydia Lunch
Decomposers: Adding Humor to the Intensity of Life