Instead of the usual cover story rhetoric on a local band that was either written by the friend of a band or a last minute sap-up, we decided to do things differently this month. We gave Eli of Mouthbreather a list of topics and told him and the band to respond to each the best they could. 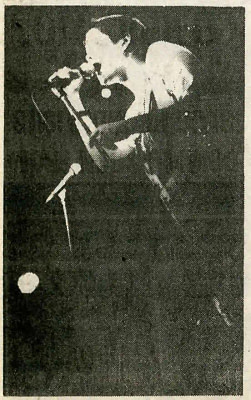 The band consists of Amber on vocals, Grant on bass, Charlie on drums and Eli on guitar. We are all 20-ish and have been playing out since September. I’m not going to do some stupid thing like describe it—come out and see it! Our influences are very diverse, and they are not only music. What comes out can only come from what’s inside and what’s inside life. That is what our music is about. We usually pass out lyric sheets at shows because it is often difficult to hear the words, so, if people want to know what we’re saying, we’ll tell them. Four people, just like you, plus a lot of electricity (oh yeah, where’s the all girl groups anyhow?).

Salt Lake City is a real cool place, and all of those who waste time bitching about it have obviously never lived anywhere else. First off, the music scene is great. There are all-age shows as well as get-drunk shows, and the door prices are almost always fair. You can walk up to somebody you know without feeling like they’re going to bust your head. Overall, there is al

most no fighting and shit like that. Yeah, we were at Chumbawamba; that sucked. There are also tons of great bands. Take advantage! Another thing that Salt Lake has going for it is the convenience and opportunities of a city, but the feeling of a town. A winning combination for sure. Lots of hot ladies at bus stops, too. 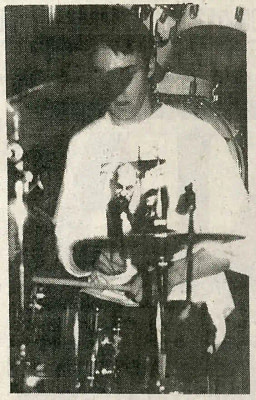 I guess in a way everything is political. The thing we have a hard time with is the politicians. I think most people agree that Bush has to go. And he should take his dishrag wife and her dog that she writes books about with him. I’m sure we’ll find out later about all the secret scary shit that’s gone on with the Republican Administration. Second: Clinton/Gore. It seems like Clinton’s main strategy is to lead us all to believe we are experiencing Armageddon. However, if he really can help poor people and spread it more evenly, that’s great. The Gore family is the problem in the picture. Maybe you’re aware that his wife Tipper (who has an affair going with Ozzy) is the one responsible for all those ugly little black and white parental advisories that they put on our records. Good way for parents to censor music for their kids … fantastic. Third: Perot. Grant and Amber say that Perot is a total homophobe, and he wants to raid minority neighborhoods on the assumption of finding drugs. It seems like nobody really knows what this guy is about. We’ve seen his TV shows andall that, but the only way to know is to put him in there and give it a whirl (which is a bit risky and probably not a great idea). When was the last time we had a president with a French sounding name? What if we the people said to hell with the four percent that have most of the money, eliminated them, and then we could all have cash for the food, doctors, whatever? So how about it?

Of course the big deal on T.V. right now is the return of Star Trek: The Next Generation on weeknights, 11:05 p.m.. Plus, Sunday there’s two old Star Treks:Grant and Amber don’t have a T.V. because they have a child instead. Something you notice when you watch T.V. is all the advertising. The trick to it is that what they say is only about one-tenth of the actual message. Don’t get programmed by your programming. Also, some of the static channels can be cool. Some people say there’s secret alien brainwashing in the static, but I don’t believe it. 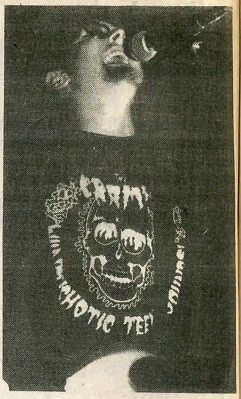 Do the things you always wanted to try but were afraid to. Be free, encourage wild abandon. And most of all, don’t forget to have a sense of humor.

Drugs have a heavy price that is not just the money. It is a personal issue which we are not going to talk about.

The band has taken a lot of flack for overemphasis on violence. We are non-violent people—except for Charlie who gets in a tiff now and again. It seems that violent ideas and feelings are best expressed through catharsis, which means that you experience through others’ experiences. That is why we sing songs about murders and things. If you have the feelings, try movies (Scanners, Henry, Silence Of The Lambs, etc.) books (Crash byJ.G. Ballard, American Psycho

by Brett Easton Ellis, Clive Barker in general) or even collector cards (40 Class A Murders!, Rigomor Press should be available at Raunch Records). Isn’t it strange how darkness is so enticing?

Who knows? There is a trick to it though. Consciousness creates form, right? Visualize the things you want and bring it together through will. You know, magic! Some possibilities for the future could be:

The future of the band is a commercial release, maybe some touring stuff and, of course, a continuation of local shows. We hope to have some T-shirts and stuff soon, if anybody wants one. The band will continue to grow and change, so don’t get pissed off it’s not the same Mouthbreather you saw last month. We have appreciated everybody’s support, and we hope you’ll come with us in the future. Don’t miss Mouthbreather this month at The Bar & Grill, where they will be opening up for The Flaming Lips, Sunday, November 8. They are one of the more interesting bands in town, so check them out and see for yourself.

Check out more from the SLUG Archives:
Rockability: An interview with Dash Rip Rock
Politics: The Rodney King Show