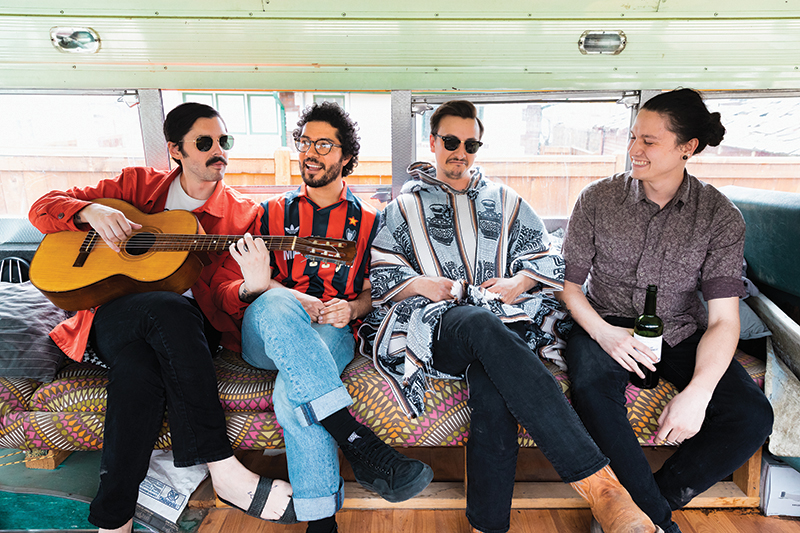 This May installment of SLUG Magazine’s Localized highlights an eclectic range of bands with a comparably unique range of history in Salt Lake City. Gracing the stage will be bands, Martian Cult, Umbels and Coolaid. The night will be filled with pop, psych and synth-driven post-punk themes that will have you bouncing from one musical land to another. Enjoy yourself on Thursday, May 16, for SLUG Localized at Urban Lounge, sponsored by High West, 90.9 FM KRCL and Spilt Ink SLC.

When Umbels guitarist/vocalist Greydon Benz was 17, he wrote the word “Umbels” on the surface of his guitar. Reflecting on that time, Benz feels that it was an embarrassing gesture but considers it the beginning of Umbels. This nostalgic sentiment is something that is a common theme throughout their music. There are songs that Umbels still play that Benz wrote 15 years ago, such as “Mothz,” which evolved just as much as Benz has as a musician.

“I wrote the song and concepts when I was 16, but since I’ve been exposed to a lot more music, it had changed the song three or four times,” Benz says. Umbels’ music is influenced by psychedelic tunes. “It is a good mix between rock and psych, especially world psych,” Benz says. “I take a lot of influence from psych from South America, Brazilian psych from the ’70s and ’60s.” Novos Baianos are a Brazilian-Portuguese band whom Benz uses as an influential example. Listening to “Mothz” confirms this—it gives off the sense of a “psychedelic jam band” but changes its tone when Benz’s vocals come in to lend the song structure. The bass is a funky ride between psychedelic, reverb-drenched gasps and dives that create the bridge and chorus, all sprinkled by Molina’s various instruments like shakers and bongos. Guitarist Andy Jack Steele says, “All of our stuff constantly changes. We can practice it one time, and the next time, it will be completely different.”

It’s rare to find band members who can be at the same speed as everyone else, but it seems that the members of Umbels enjoy the same reasons for being in the band. Drummer Braden Tipton says, “I play my tasiest stuff [music] when I can’t remember what I played last time—even if we play the same song two days in a row, it will never feel the same.” Benz and Steele had already been playing together since junior high when Umbels began. “He was the first person I have ever jammed with. It’s been a blossoming friendship ever since,” Benz says.

Steele’s and Benz’s first show was when they were 15 in a band named after Benz, though they refused to disclose what the name specifically was. Steele and Benz have a playful relationship. This is evident from the energy in the room when they are together, which plays off well with Tipton’s carefree and giggly personality. Everyone in the band seems to dedicate themselves for a different reason. Tipton wants to play on the drums, Benz wants to write and Steele says,  “I’m sick of buying drinks, so I’ve joined multiple bands—I get twice the drink tickets,” he says.

Tipton and percussionist Hugo Molina Jr. (xylophone, triangle, congos, shakers, tambourine) have a similar, long-standing relationship to Benz’s and Steele’s. Seeing as they’ve been playing together for 10 years (starting out in band Samba Fogo), they joined Benz and Steele with ease. Molina add the world music elements that Benz aims to include into Umbels’ sound.

Molina achieves this with a range of instruments he efficiently includes in the set. Molina started drumming when he was a kid, after he naturally started getting into different music like metal and The Beatles. Coming from El Salvador, Molina is excited about his musical opportunity here in Utah with Umbels. He says, “Me and Tipton play in a different band; they invited me to play percussion for them for a show last year. Loved it, love the band, the music we’re creating. It’s pretty cool. all members are extremely kind and super talented, and I’m just glad I’m part of this fun project.”

“We just want to play house parties—we want to do a tour of our friends’ garages.”

The fifth and newest member of Umbels, Dravland Brown, plays bass. Many will recognize him from 90s TV and Twilite Lounge comedy nights, where he is the only comedian. He did not yet know he was part of the band at the time of this interview or the photoshoot. So obviously, the guys in Umbels are chill as fuck. Following suit, their sets are not as regimented or strict compared to other local bands. Benz writes the songs, but doesn’t hold the rest of the band to execute them perfectly—he gives them a lot of creative freedom. “A level of perfectionism that doesn’t bleed onto others [when writing music] takes a lot of courage and is hard to share,” Tipton says about Benz’s writing style. The same lax attitude applies when practicing or playing shows: “[The current members have] been jamming six times a year for two years,” Tipton says. Umbels don’t see playing music as a race to a finish line but more like a stroll in the park.

“We just want to play house parties—we want to do a tour of our friends’ garages,” Steele says, “and it is always better when all of our friends are there.” Umbels do eventually want to go on tour but are currently focusing on writing and recording music, along with integrating Brown as the new bassist. Benz says, “Part of the reason why we never discussed touring is because I think we just focused on recording music. I really enjoy recording music and prefer that over going on tour.” Umbels is not against touring nor do they believe that bands who tour frequently are doing it wrong. They just have had other “life things” taking priority at the moment. For example, Benz and Steele have been occupied with school, with Benz just recently receiving his bachelor’s degree in linguistics, even though Benz tried to convince me he has his PhD in drinking wine.

You can find Umbels’ music or what they call “palm rock” on Bandcamp at and information about their upcoming shows or a hypothetical tour on their Facebook page. And of course, come enjoy their set at the upcoming Localized on May 16 at Urban Lounge.