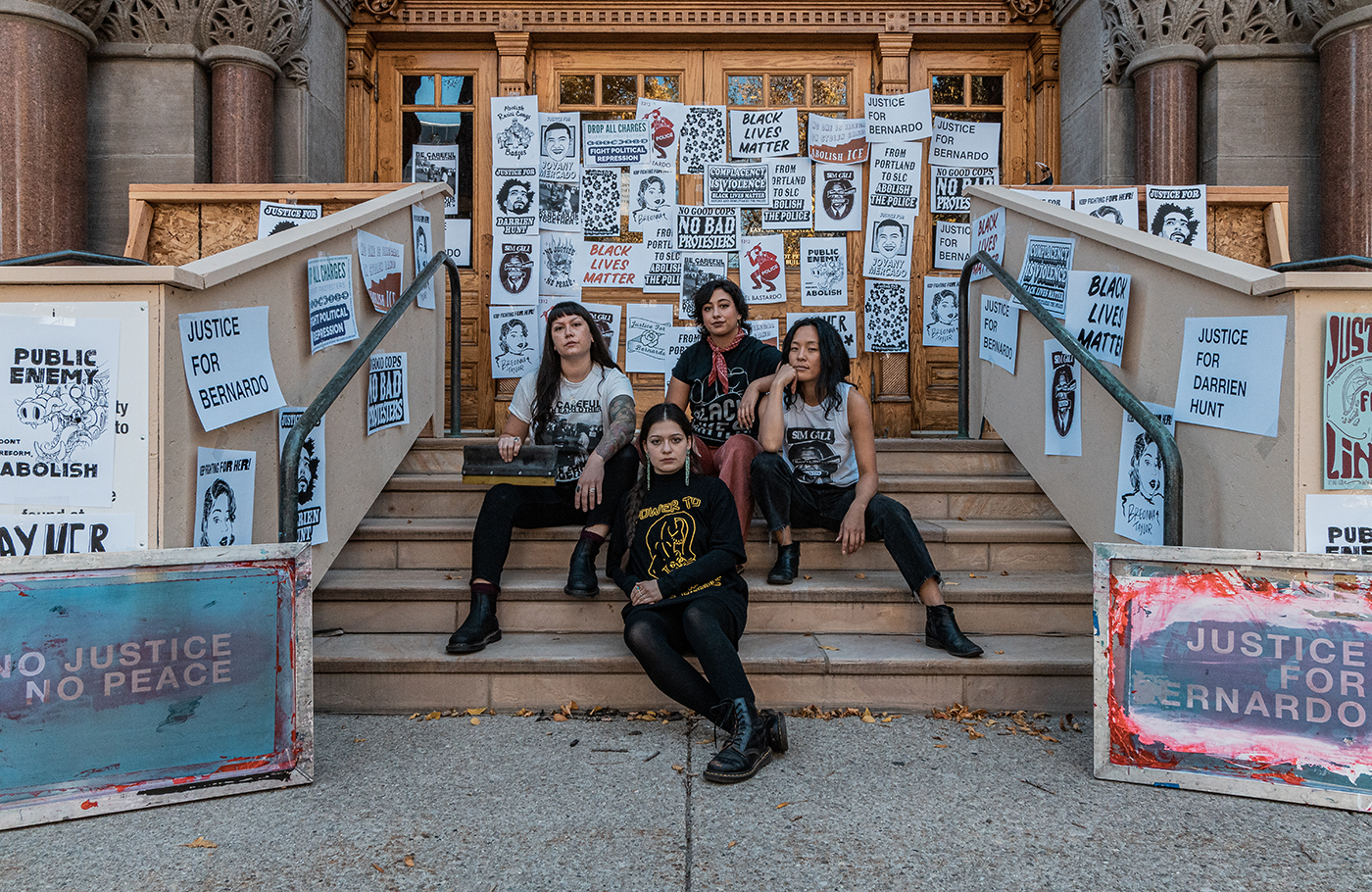 On May 12 of this year, local artist Taylar Jackson began learning how to screen-print. By the time of the first large-scale protests following the murders of Bernardo Palacios (on May 23) and George Floyd (on May 25), she was already mass printing signs for the movement adorned with the oft-chanted phrases “DON’T SHOOT” and “NO JUSTICE, NO PEACE.” Since then, her screen-printing operation has evolved into Local Propagandists, a revolutionary-minded team of artists and printers that, in her words, make “art for the murdered and the missing.” With an ever-fluctuating cast of collaborators and volunteers (over 100 were involved over the summer), Local Propagandists currently exists as a core four-person team, with Amoiri DeBusk, Hannah Kim and Tressa Marre joining Jackson as full-time designers and printers.

For the members of Local Propagandists, their art and imagery exist alongside the work of outlining a progressive ideology and revolutionary organization. To them, the heart of propaganda is a defining paradox: Turning complex historical issues into slogans or images can often feel reductive in the face of the gravity of the messaging, but such a distillation is an essential quandary to come to terms with when defining and actualizing a movement. “A single image actually really helps people connect over what they’re fighting for and what issues they’re trying to solve,” says Marre. “I think it’s really useful for conceptualizing and explaining what’s going on. It’s a form of storytelling that I think is really effective.”

Following this view of art as mass communication, Local Propagandists reject any (in their view, erroneous) assumptions about the elitist nature of art and instead view their imagery as the closest thing to universal communication possible. “There [are] less barriers to entry to understanding an image, especially when you craft an image that has a heavy impact,” says Marre. “It’s the very best way for us to tell our stories and express how we feel and speak to other people to hear stories about their lives.” DeBusk further emphasizes that, given the mass availability of Local Propagandists’ apparel and prints through a sliding-scale donation format, the group is “making art at a low price point [so that] you can be involved in the art.”

“There [are] less barriers to entry to understanding an image, especially when you craft an image that has a heavy impact.”

Though Local Propagandists have printed work by a litany of local artists and thus eschew any one set style, each print contains recurring imagery and a collective tone. The popular “DROP THE CHARGES” T-shirt (designed by Jackson) and their poster stating “THE WORLD IS WATCHING” (a collaboration with Oscar Roche) employ the motif of red paint in reference to the felony charges Sim Gill delivered to protestors for splattering red paint on 400 South at the July 9 protests. Historic revolutionary iconography such as Black Panthers, the Black Power fist and broken chains appear more than once, and the text on these posters is often big, bright and clear, emphasizing catchy slogans and chantable phrases.

Despite what might seem to be outright political ideology upon first viewing, Local Propagandists are cagey about describing their art as an inherently political statement. They view it more as person-centric art that inevitably gets embroiled in political happenings: “It’s not about the politics involved, but amplifying the voices that have been hurt by political figures,” says DeBusk, noting that their primary focus is sharing in the grief and quest for justice with the friends and families of those memorialized and fought for through Local Propagandists’ prints.

But if they don’t consider themselves to be making firm statements of political ideology, there is a collective consciousness at the heart of the Local Propagandists’ art. Jackson says, “Our views are [in line with] abolition, and to us, abolition is radical love. To conceptualize these really heavy, heavy concepts and put them in images that can resonate and bring different feelings other than hurt and anger—also hope, [and it] has been said [that] hope is discipline.”

“Screen-printing has a history of propaganda and art for the masses, but I think there’s something really powerful about the fact that it’s very labor-intensive.”

More than just the ideological and aesthetic benefits printed art presents to their cause, Local Propagandists view the process of making their posters and wares itself as a dedication to the movement. “Screen-printing has a history of propaganda and art for the masses, but I think there’s something really powerful about the fact that it’s very labor-intensive,” says Marre. “There’s so much literal, physical sweat and tears that go into every single piece that comes out of the shop.” Jackson adds, “It’s labor intensive, emotionally intensive … to have meetings with the families, and they believe in us to portray their emotions.”

Both despite and because of these multifacetedly intensive work demands, Local Propagandists have become a well-oiled and impressively productive machine. At the time of our conversation, the group had screen-printed more than 300,000 prints and around 7,000 T-shirts since late May, often cutting down the standard screen-printing turnaround time of two weeks to a rapid four days or less. “Essentially, we’re just a screen-printing shop full of really strong women who believe that love can get us through that, even though it hurts so much to do this work,” says Jackson. “Sometimes, we’re just running from a protest to come back to print more.”

Many of these prints have been commissions for other Utah-based mutual-aid and activist organizations, among them COVID Mutual Aid SLC, Decarcerate Utah and the Justice for Bernardo organizations. While the many collaborations and commissions have added to the volume of Local Propagandists’ work, these jobs are necessary to take on for these artists.

“I wasn’t expecting the demand to be so high when I started this project, but I think it’s so important for all of these organizations,” says Jackson. “It’s become almost an interactive art installation when you’re there and people take them and they tape them up on buildings.” Not just content to create art for their own aims, Local Propagandists seek to use their skills and resources to help uplift those who share similar abolitionist and revolutionary aims, spreading their message and visualizing their cause.

“[When] you see that image for the rest of your life, you know how it connects all of us.”

And it’s this sense of community connection—more than the pride of individual creation—that drives Local Propagandists in all that they do. By providing their wares and prints to the masses without hefty price tags, the group seeks to infiltrate the world with their message and imagery. “You can see it outside your window; you can see it on street lamps on your way to work—wherever you are in your community,” says DeBusk. “And … you know the people that are making this art. You see them at your rallies. You’ve seen them, and you’ve hugged them and you’ve cried with them, and that’s something that’s so important. [When] you see that image for the rest of your life, you know how it connects all of us.”

Another leg of this outreach and engagement turns toward the concept of public education. “Local Propagandists have created an avenue [through which] people can grasp what activism is. It really is the thing itself. It gives you something to hold or to wear,” says Jackson of their use of physical items to spread their messages. More than this, the organization has already begun undertaking speaking and educational events at institutions such as Salt Lake Community College about the importance of propaganda, and they hope to continue spreading knowledge about abolition, screen-printing and more in the months and years to come through classes, lectures and workshops.

On top of this literal educational outreach, Local Propagandists view their work itself as a catalyst for conversation and communication within the movement. “If you can make the revolution trendy somehow, then do it, but to ensure that it’s not a trend is the biggest importance,” says Jackson. The collective’s art—visually appealing and attention-grabbing—certainly serves the cause of making revolution accessible and shareable, but there’s more at stake than these catchphrases and logos: Following the ethos of radical love, Local Propagandists view themselves as one part of a collective process to imagine a new future unbeholden to today’s oppressive systems.

“We’re not just claiming that we hope things change or that some systems end—we’re also creating what we want to see in Salt Lake, the sort of community care we want to see.”

While the group acknowledges that tearing down certain structures is a vital step to take, there’s another facet of greater importance. “The primary work is to build replacements,” says Marre. “We’re not just claiming that we hope things change or that some systems end—we’re also creating what we want to see in Salt Lake, the sort of community care we want to see.”

When I ask what the group has planned for the future, Jackson delivers a telling phrase: “We’re definitely not gonna stop.” To keep going, to push yourself to continue to get out of bed and create every day against your own hang-ups is one challenge, but for the Local Propagandists, there’s a defiance in their refusal to let any of the blockages—personal, social, political or otherwise—slow the wheels, even as their own safety has been compromised a number of times by police, far-right extremists and more.

For now, the group hopes that “the community will continue to support us,” says Jackson, while each individual still keeps themselves and their comrades safe through the fight, an ethos best distilled by the slogan adorning a print and T-shirt designed with CrimethInc.: “BE CAREFUL WITH EACH OTHER SO WE CAN BE
DANGEROUS TOGETHER.”

Currently, all Local Propagandist apparel is available at Cahoots at 9th & 9th, and they hold a stock of signage at Este’s Downtown location by 2nd and 2nd. All Local Propagandists products are available through a sliding-scale donation, but any and all contributions past a standard price point are appreciated and help ensure the future of the organization. The group is also available as general screen printers for non-movement related printing jobs (band posters, promotional art, family events, etc.). To contact Local Propagandists about printing, how to volunteer or the best and safest way to donate, DM them on Instagram @localpropagandists or email them at localpropagandists@gmail.com.