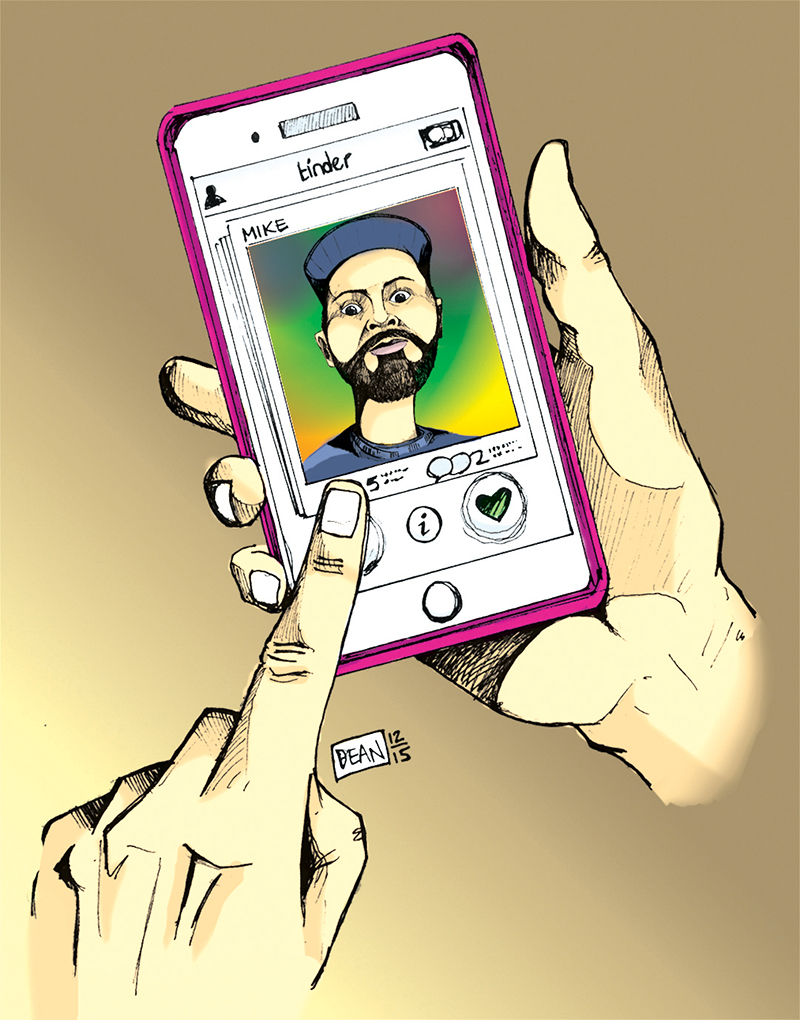 It’s amazing what our phones can do these days. They’re little computers in our pocket that keep us all warm at night and do everything for us. Children today are so lucky—they’ll never have to know what the Yellow Pages are or what the Dewey Decimal System did. And if they want to find out, well, they just have to stick their hand down their pants and Google it. In fact, to me it’s strange that we are even still calling them phones. Phone calls are the thing I least use my phone for. Among the many apps in Cyber Land, there are several that will supposedly help you get laid, go on a boring date or meet a life partner—whichever you prefer. The most popular one is probably Tinder.

I found out about Tinder by walking into a local diner that was pretty empty at that moment, except for a row of snowboard kids sitting at the bar, most of whom I knew. None of them were eating, and all of them were simultaneously and quietly glued to the glows of their cellular tellulars. So I sit down and say, “What the fuck are you guys doing?” to which one of the snow bros replied, “We’re on Tinder, dude. You match with girls, and most of them probably want to fuck.” So I say, “Oh, so it’s kind of like Grindr?” to which no one replied. None of the snowboard kids had heard of Grindr. I guess that’s why snowboarders don’t use poles.

I decided to take a seat and see what all the non-fuss was about. The instructions were simple: You look at a picture, and if you like it, you swipe right. If you don’t like it, you swipe left. For how much I enjoy being lazy, I thought that this just might be the perfect dating app for me. Unfortunately, I’m not that photogenic. I’ve gotten comments from more than one of my matches on my Tinder profile along the lines of, “Why do you look like a serial killer?” and whatnot.

My OkCupid profile had taken a shit as of lately, so I went ahead and started swiping. The first thing I noticed was the amount of BYU coeds on the app—another Happy Valley, Utah, stereotype in the making. This made me wonder why so many BYU babes would flirt with jeopardizing the honor code, and it made me laugh. Were they were so naïve that they didn’t know the primary reason of the app was for anonymous sex? Either way, none of the Zubie chicks listed in their profiles if they were into floating or not. (If you don’t know what floating is, please just Google it right now.)

This app works WAY different for girls overall than it does boys. Us silly boys, with our need for instant gratification and fast ejaculation, are basically a sea of creeps. I, myself, hardly ever matched with anyone when I was on the app, and I get mistaken for Michael Fassbender like all the time. But every girl I was a friend with that would show me her Tinder profile on her phone had an ungodly amount of matches and creepy messages.

Another thing I have noticed about Tinder is the amount of fishing pictures people have on their profiles. Personally, I hate fishing, but there is something oddly subliminally metaphorical going on here: You are figuratively fishing for people on this app, so it makes sense to show off a giant rainbow trout. The Tinder fish-pic drinking game soon ensued. It’s pretty self-explanatory—take a shot for every fish pic you swipe. You’ll be too wasted in no time to message back that terrible person you accidentally liked on the app.

As worthless as the app was for me, I’m sure that it works great for some people. One of the funniest parts about working in a cozy neighborhood bar is noticing the awkwardness of a couple’s first Tinder date. That “You don’t look like your profile pics at all” face that I get to see people make is priceless. One of the greatest pranks of mankind could just be Apple’s camera settings’ ability to make us look way more attractive than we will ever be.

But sometimes the Tinder date goes all right. You might get laid, or the person turns out to actually not be creepy. Then what? Nowadays, there come certain new milestones in our relationships, such as changing our Facebook status from single to whatever—and deleting your Tinder app is no exception. How do you know the one you are with is really down? It’s not the flowers, nice dinners, meeting the parents or even the ring. It’s cleaning out your cell phone and deleting your browser history.