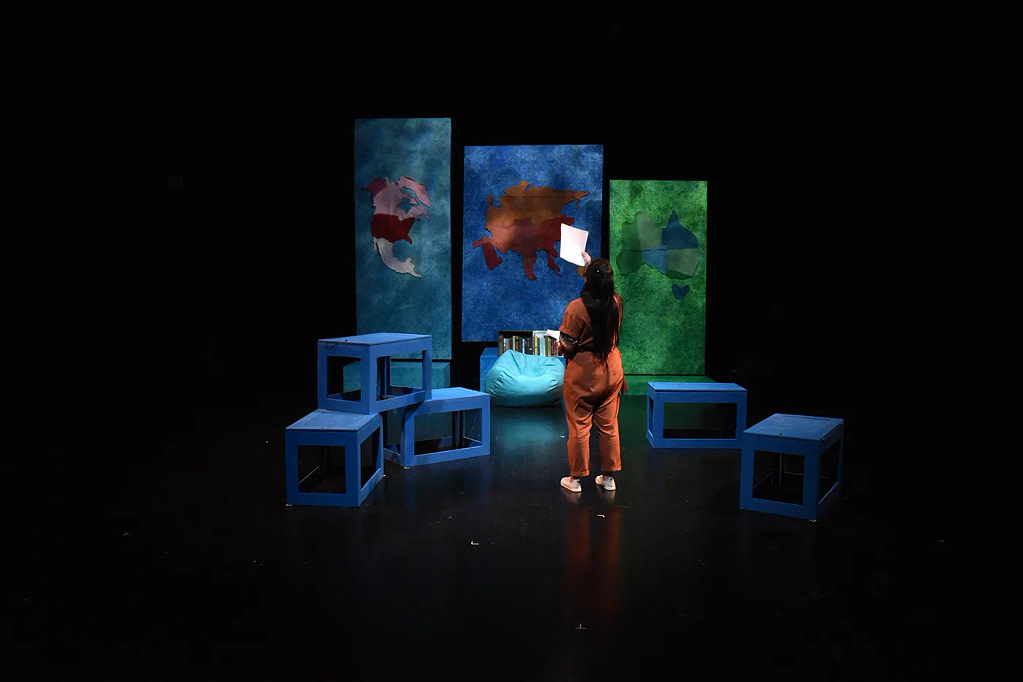 Mestiza, or Mixed: A Utah-based Story of Mixed Identity and the Artist’s Pursuit

Plan-B Theatre presents Mestiza, or Mixed, a well-woven story of intersecting personal identities and how those play out in the world. As the theater lights slowly warm the dim light, three canvases are revealed as the backdrop for the unfolding story.

The three canvases serve as the metaphorical and literal representation of the distance the protagonist, Lark Timon, feels from the life she’s known in Utah—a place where her Filipino identity is not widely understood or even respected—and the Philippines, a place she’s never been to but considers a kind of home. Each state of the United States has been sewn on in a bright red, an ominous contrast to the surrounding countries painted in light pink. A dark, ocean blue defines the negative space within the continent of Southwest Asia, also painted in blue. Timon’s father left during his childhood, and that space, too, is another distance she feels from oceans away.

Building equity, buying a house and getting a “real” job are among her mother’s concerns, while Timon wants to “talk about souls and feelings and emotions.”

Playwright Melissa Leilani Larson asks viewers to fully step into a round table of identities, wants and needs from each of the five cast members’ intersecting storylines. Although Timon’s efforts to become an accredited playwright carry the plot, the other characters’ needs and opinions of her efforts reveal themselves through dialogue, pauses and silent, fleeting looks shared by the family members.

As with many millennial post-graduates, Timon’s well-intentioned mother pushes her to take “the next steps” into adulthood. Building equity, buying a house and getting a “real” job are among her mother’s concerns, while Timon wants to “talk about souls and feelings and emotions.” The stage lights follow Timon and her mother, Carrie, as they battle two differing opinions. The light eventually falls dim on Carrie and rests on Timon’s hunched shoulders and furrowed brow, which face away from the audience. Timon’s older siblings also walk the line between supporting their sister through her artistic endeavors and feeling slighted by her emotional needs always taking center stage. Timon and her sister, Ava, can never seem to be in the same place at the same time. When Ava takes one step toward Timon, Timon finds a reason to step in the opposite direction.

Timon questions why she can’t do both—tell a story based on a genre she grew up admiring with her now-absent father and represent her Filipino culture.

Timon’s partner, Alex, also challenges Timon in all aspects of Timon’s identity. While “encouraging” her to be confident in her abilities as a writer, Alex simultaneously reprimands Timon for writing a Western play—an Americanized, romanticized and othering genre in her eyes. Alex pushes her to “use her privilege to tell necessary stories” to make a difference and to be taken seriously by other writers. Timon questions why she can’t do both—tell a story based on a genre she grew up admiring with her now-absent father and represent her Filipino culture. The weight Timon carries is not from who she is but from how little she knows about where she’s from.

The tight-knit family works to support each other through the adversity they face as a marginalized community in Utah. After having to explain herself to her family, partner and then a well-known producer, Timon ultimately uses her voice to tell a story that represents exactly who she is, where she comes from and where she’s going. Her most pivotal moment comes as the sound of ocean waves grows louder in the background. Timon stands just off center stage, looking out into an unknown distance. With her manuscript in hand, she begins, “Dad, I–” but never finishes the thought. From that point on, viewers witness the artist’s transformation truly begin.

Mestiza, or Mixed will be running at Plan-B Theater from June 9–19 or streaming June 15–19. Tickets can be found at planbtheatre.org.