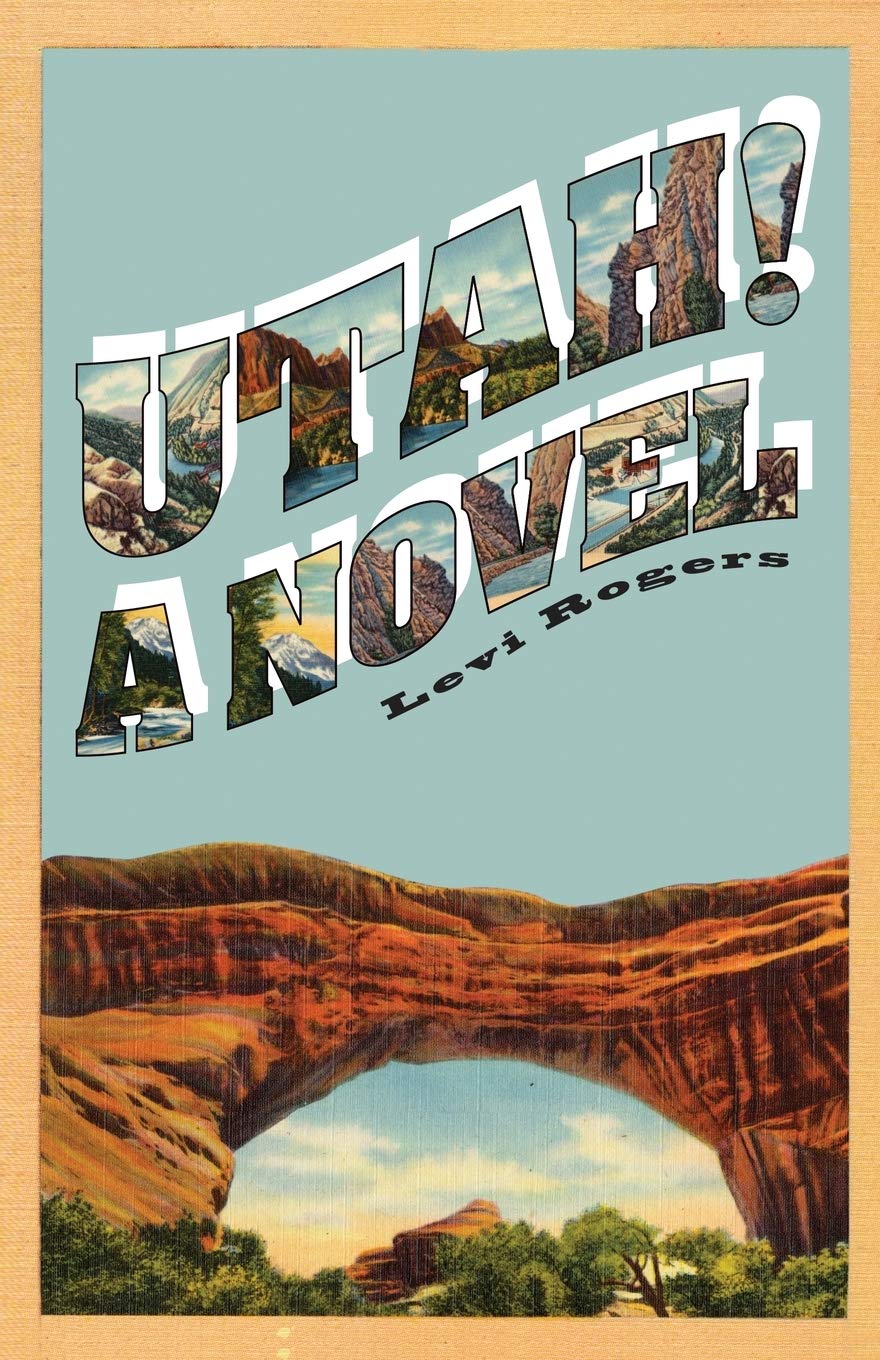 Levi Rogers’ debut novel, Utah!, follows a young family as they road trip and stumble through the book’s namesake state. As his characters meticulously explore the geography and culture of Utah, Rogers probes the consciousness of contemporary America. Set in the near future, Utah! completes its simultaneous tour of the Beehive State and the human condition with sweeping carefulness: north to south; top to bottom.

At some unspecified date in the 2020s or 2030s, the interwoven paths of Utah!’s characters are set against a backdrop of rampant natural disasters, mass shootings and apocalypse anxiety. Rogers has designed a setting that will be eerily familiar to readers, especially those familiar with the state of Utah and the American West. Vague references to the COVID-19 pandemic and the 2016 election let the reader know that the world of the book is our world—just a few years ahead on the road toward devastation and chaos.

Rogers is an efficient world builder, and his ability to set the stage quickly affords him the opportunity to touch on a wide range of ideas through the minds of his characters. The plot of Utah! functions like a literary funnel. All of the characters slowly work their way toward a single location, and anticipation for a compelling climax grows steadily throughout. Along the way, Rogers pursues subject matter including climate change, partisan politics, marital discord and social media, and mostly succeeds in disappearing into the interactions between his characters.

For readers unfamiliar with Utah, this novel can be considered a kind of anthropology textbook filled with spot-on exploration of the human dimensions and dynamics of the state. Alternatively, knowers and lovers of Utah will recognize Rogers’ descriptions of regional eccentricities to be magnificently accurate. For anyone who has spent meaningful time in the state, reading this book will transport you right back to the land of gridded streets, diluted cocktails and car dealerships bearing the name of Mark Miller. Whether or not you are well-acquainted with Utah will define the experience of reading this book. For some, it will elicit a familial sense of shared experience. Others may feel like they’re reading a report turned in by intrepid explorers after returning from a far-off land. Either way, Rogers’ inch-perfect account of Utah culture offers plenty to enjoy.

In every era, humans fear and anticipate the end of the world. However, in the present moment—as the world combats a pandemic and the ballooning threat of climate change—impending doom seems to occupy a growing share of humanity’s collective consciousness. From the edge of extinction, Utah! examines the human legacy as it stands, and offers an honest picture of some of our uglier tendencies.

As the plot of Utah! winds toward its watershed conclusion, multiple characters are busy reckoning with their own form of existential crossroads. Though Utah! is a brief novel, Rogers manages to make his character’s personal strife feel worthy of the reader’s investment. Utah! Is partly a study of conflict between a person’s inner life and the expectations and obligations that they must entertain from the world around them. As the story congeals, Rogers regularly alternates between the stormy and insightful internal monologues of his characters and the violent or restrained interactions between them. Utah! has been written with empathy for the universal human failure to effectively express the innermost parts of ourselves.

Even if you didn’t know that Rogers is the co-founder of Salt Lake City’s own La Barba Coffee, reading Utah! makes it abundantly clear that he spent many devoted years in the state. The novel’s pages are packed with small odes to the people, places and oddities of Utah life. When combined with a cast of interesting and approachable characters, the finished product is a story that applies everywhere: a timely inspection of sacrifice, compassion and humankind’s enduring frailties. –Austin Beck-Doss