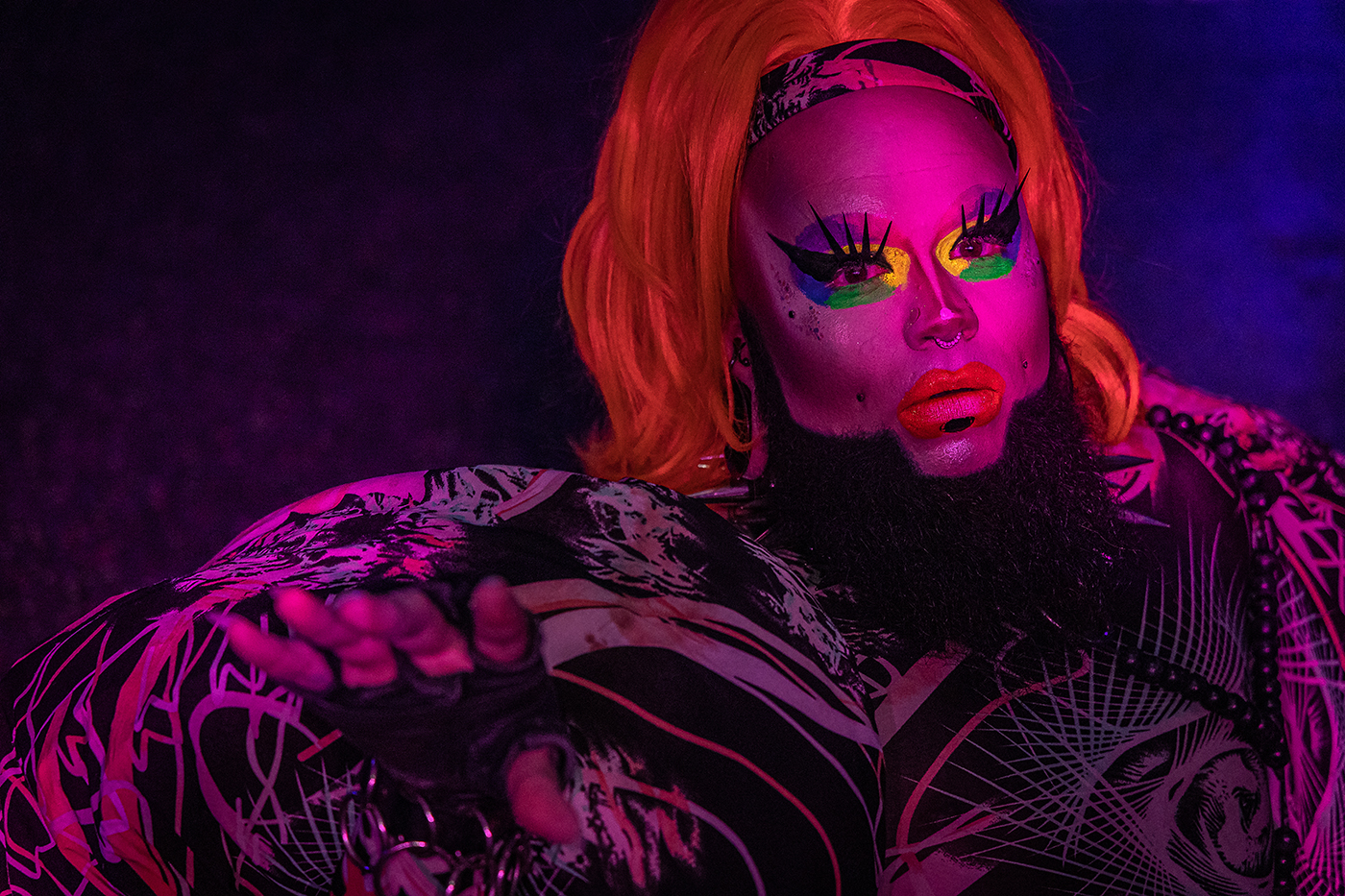 Salt Lake, we have been blessed. Blessed with the essence and aura of an incredible performer and body-positive member of the local drag community: Ursula Major. One of the fresh, new visibly queer faces that’s been turning out all over town, she’s brought the skills as a performer and artist she learned on the West Coast to downtown Salt Lake. She’s not messing around with her queerness and is ready to shake things up in our LGBTQIA+ community. A tattooed, pierced and bearded beauty, Ursula Major’s eccentric energy is cross pollinating the underground and queer communities, and it’s metal as fuck to watch.

Ursula grew up in Tucson, Arizona. At the ripe age of 22, she moved to Seattle where she got her start in drag. She moved around a bit more, bouncing back to Tucson for a year and a half before a five-year stint in Los Angeles where she landed a spot on the first season of the drag competition The Boulet Brother’s: Dragula. Ursula then made the decision to transplant here to Salt Lake in the spring of last year and hasn’t regretted the decision to rehome from the West Coast to Ensign—after all, this is the place.

“To me, [Ursula] is the ideal. It was always about becoming this thing that was everything I wanted to be.

Originally a professional piercer, Ursula has augmented her already outrageous appearance with her piercing skills in order to entertain and excite audiences. After appearing on Dragula (a horror-themed reality drag competition looking to find the next drag supermonster), Ursula has used her drag to push outside of the box that some contestants find themselves stuck in after the show. Her drag performances tend toward the unexpected and keep people wanting more—a “palate cleanser,” a she calls herself. Often, she incorporates high-glamour makeup looks featuring a big, beautiful body covered in lush hair. “I like to turn my ‘distractions’ ([as] some people [would call them]) into something more powerful.” She says that she recently ditched traditional padding used to mimic the female body in favor of waist training. “I stopped wearing padding because it was sweaty, and I was tired of it. [Then] I started waist training. Now, I synch my waist 40% smaller than my actual waist.” She says people have called her lazy, but she knows it’s more work to be her authentic self. as a hairy, non-padded femme myself, I completely agree.

Her style of drag seems to me to be a combination of glamour, horror, femme and a healthy dump of anti-establishment iconography. Ursula has done some wild performances in drag which include blood letting on stage, stapling her and a lot of other body horror–themed acts. Public service announcement: Ursula Major doesn’t use fake blood. But don’t try this at your home stages kids, Ursula is a trained professional and takes extreme measures to ensure both the audience’s and her own safety. An Urusula Major performance is all about the art of the transformation and she loves turning from one creature to another, right before your eyes.

In explaining who she is and how she has become her drag persona, Ursula Major tells me that she identifies more with her drag name than her birth name. Over the years, she’s actually transformed into Ursula. She’ll give some her given name, but she admits that, “To me, [Ursula] is the ideal. It was always about becoming this thing that was everything I wanted to be. As a result, these two people have grown together.” Accepting a self-created persona, embracing fears, taking control of her own femininity and being a part of the LGBTQIA+ community have all led to their current career with drag. “Part of us moving [to Utah] was about creating more queer beacons for others to follow. Being in LA, there was plenty of that, plenty of places to go. But creating more spaces and opportunities here was ultimately more important,” says Ursula. It hasn’t even been a year, and Ursula is already proved herself to be an inspiration for other local queer folx.

Recently, Ursula was the Mistress of Ceremonies for SLUG’s 31st Anniversary Localized show and has hosted additional events at Bottoms Up, Metro Music Hall and more. As one of the newest residents at the recently renovated Bottoms Up, Ursula has done a lot of work in the drag community of Salt Lake. She feels that she can enjoy a higher quality of living, which many of us too benefit from in Salt Lake alongside her partner, who is an original Creature Feature—One Million Moths. Together, they are working with our local LGBTQIA+ community to elevate and expand drag as we know it.

“Part of us moving [to Utah] was about creating more queer beacons for others to follow.”

Be sure to check out Ursula Major at Bottoms Up, located at 579 West 200 South, SLC, Utah where she regularly performs. For more updates on upcoming events and other fun gigs, check out the venue’s Instagram and Facebook @BottomsupSLUT. Also be sure to keep track of the illustrious Ursula Major on Instagram @ifvckedursulamajor and support local drag!