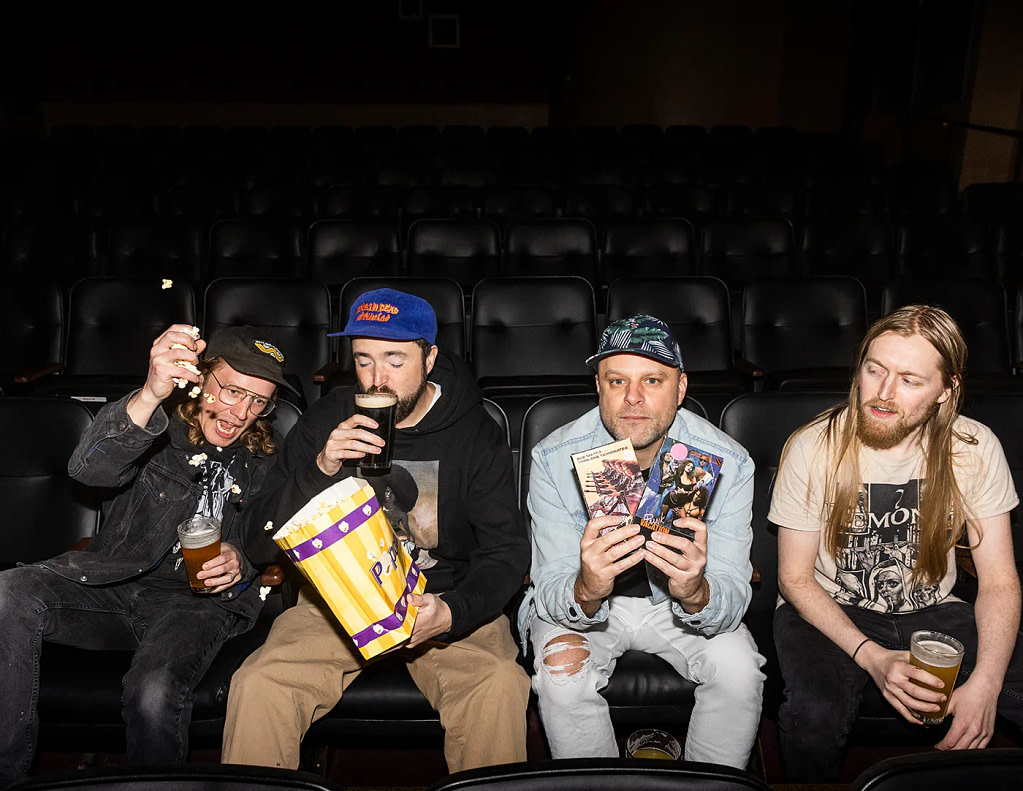 If you’ve ever been to the movies outside the beautiful and restrictive state of Utah, enjoying a beer with your film is about as ubiquitous as popcorn. Here in the Beehive State, however, (where you can’t even purchase non-alcoholic beer without a valid ID) Brewvies Cinema Pub (located in both in SLC and Ogden) is the only movie theater in Utah with an alcohol license and full bar. Thanks to the work of local movie buffs James Ramirez, Brock Grossl, Daniel Fischer (Fisch) and Jesse Wroe, Brewvies separates itself further from other theaters by offering a brief respite from the torrent of remakes, prequels, sequels and adaptations that always suck.

“Hump Night’s beauty lies not only in the films they show but also in the way they show them. It feels like a group of friends watched a bunch of cult movies while cracking jokes and drinking beers and then went pro.”

Hump Night at Brewvies is a free weekly screening of an alternative film every Wednesday at 8 p.m. at their Salt Lake theater. The rotating categories include Kung Fu Theater (self-explanatory), Hard Boiled Cinema Night (cult classics and genre pics), Salt Lake Movie Massacre (old-school horror, action and sci-fi) and Beer GoGGles Night (VHS exclusives), each curated by a different member of the Hump Night crew. “It’s a unique cinematic experience meant to get people to sit in a room full of other people and see something they wouldn’t see at home,” says Ramirez.

To maintain my journalistic integrity, I drank at home before I turned out for the monthly Hard Boiled Night movie feature, guest-curated this week by Wroe of Film Buff Night. This showing featured the 1971 film The Devils, a drama-horror film exploring themes of religion, sexual repression and abuse of power directed by Ken Russell. More dramatic and a bit more arthouse than the films typically shown, The Devils remains a good representation of the spirit of Hump Night. They managed to secure the elusive, X-rated British cut, which is banned in multiple countries and not streaming on any platforms. I truly enjoyed the movie and loved that I could just show up and await what they had picked. Needless to say, the curators of Hump Night have earned my full trust.

“It’s a unique cinematic experience meant to get people to sit in a room full of other people and see something they wouldn’t see at home.”

Ramirez began showing niche Kung-Fu movies 10 years ago at Brewvies, and Grossl has curated Salt Lake Cinema Trash Night since 2016, but Hump Night didn’t reach its full, current form until August of last year. Quarantine halted or otherwise slowed the production of many new blockbuster films, so once theaters finally opened again, there wasn’t much to show. These two, along with Fisch, were able to fill that vacuum by screening alternative, deep cuts and “so bad they’re good” movies, cementing Wednesday night as their own.

While you can drink at Brewvies any night, “Hump Night is the best night of the week to come drink as we encourage rowdy behavior, debauchery and drunkenness,” says Fisch, who curates Beer GoGGles. It’s unique as it’s meant to be a participatory, group experience full of raucous laughter, jeers and audience interjections. When asked which kind of beer pairs best with B-movies, Salt Lake Movie Massacre creator Grossl, replied simply, “Quantity.”

Hump Night’s beauty lies not only in the films they show but also in the way they show them. It feels like a group of friends watched a bunch of cult movies while cracking jokes and drinking beers and then went pro. I don’t have the patience to weather the paradox of streaming services having so much content and yet, absolutely nothing that sounds appetizing. I don’t even have any friends left whose movie recommendations I still trust (Shia LaBeouf apologists). On Hump Night however, your friends are movie experts, and despite watching it on a 45-foot screen, it still feels like an intimate movie night with food and booze. Did I mention it’s free?